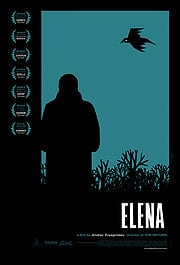 [xrr rating=3.75/5]Family has a complex, inexorable pull on a person. Devotion to loved ones can persist beyond the easily defined borders of logic and drive someone to make choices that might otherwise strike them as unthinkable. Sometimes there can be no greater motivator than insuring the safety, or even merely the relative comfort, of those residing on the closest branches of a family tree. An examination of just that brand of amplified motivation is at the heart of Russian director Andrey Zvyagintsev’s Elena.

The film features Nadezhda Markina in the title role. As the film begins, she begins the day moving slowly around a well-apportioned apartment, eventually waking an elderly man named Vladimir (Andrey Smirnov), who, it can be quickly intuited, is the owner of the space. Initially Zvyagintsev is deliberately vague about their relationship, making it seem as though she’s his caretaker (she sleeps in a separate, far more modest bedroom, for example). They converse over breakfast, the exchange weighted with history between them, largely defined by knowledge of each other’s children that is both intimate and distant. They talk as if they understand the other’s parental relationships, but aren’t really a part of them. Eventually, it comes to the surface that these two are actually married, the end result of a relationship that began a decade earlier when she served as his nurse in the hospital.

The screenplay Zvyagintsev wrote with Oleg Negin dispenses its details with immense patience, a quality that the director mirrors with the pacing and structure of the shots. The film opens by holding a shot of an unremarkable, bare tree branch outside of a window for long enough to make the kind of moviegoer who can’t wait to see Battleship break out in anxiety hives. It’s nearly ten minutes before a single line of dialogue is spoken and Zvyagintsev focuses on the mundane and uneventful throughout, tagging along tirelessly as Vladimir drives out of his parking garage or as a hospital attendant begins the process of cleaning a recently vacated room. While other directors employ this technique to heighten some pending cataclysm, for Zvyagintsev it’s merely an acknowledgment that this is the common pace of life. Even when sadness strikes or terrible decisions are made, it typically doesn’t happen with the headlong rush seen in the movies.

Elena faces such a decision when a few troubling incidents converge. Her unemployed, somewhat uncouth son (Alexey Rozin) begins pressuring her for the money it will take to get her grandson (Igor Ogurtsov) into college instead of being stuck into the army. At roughly the same time, Vladimir suffers a heart attack, leaving him housebound until a hefty regiment of medication that Elena is called upon to administer. When Vladimir subsequently refuses to give her the money she’s asked for, she begins contemplating what different troubling recourses might be available. It is the stuff of classic film noir with the moody shadows replaced by the unyielding light of day.

There are times when Zvyagintsev’s achingly slow pacing works against the film somewhat, developing a mesmerizing quality that detracts from the emotion of the dilemmas onscreen. While Markina is quite good as Elena, the role is conceived as so passive that it makes the calculation that emerges in the final act come across as a little unlikely. That’s part of Zvyagintsev’s point – villainous actions can be perpetrating by the most unassuming souls – but his predilection for the inscrutable undercuts the drama. That issue is made even clearer by the presence of Vladimir’s daughter Katerina (Elena Lyadova), who is vividly drawn in a just a few scenes, appraising her stepmother with withering intellectual disdain and showing how combativeness can be its own sort of affection. Lyadova is terrific, immediately commanding and slyly powerful in demonstrating the ways that her character has figured out the weakness and deceptions of all those around her.

Vladimir’s relationship with Katerina provides a telling contrast with the one Elena shares with her kin. Where she is helpless before her son’s bullying, Vladimir and Katerina push back and forth at one another, each piece of the exchange another challenge. Like Elena’s equivocations to her son, Vladimir perhaps allows Katerina to get away with more than he would anyone else, but there’s a strong sense of how the two of them have earned their shared alliance, tenuous as it may be. Their path together may be fraught with challenges, but they know it, they’ve accepted it and they surreptitiously draw strength from it. In Zvyagintsev’s estimation, that may be a little nobler, but it won’t necessarily keep them safe, not from each other and certainly not from anyone outside of their immediate family circle. Not when they’ve got their own family allegiances to preserve and protect.