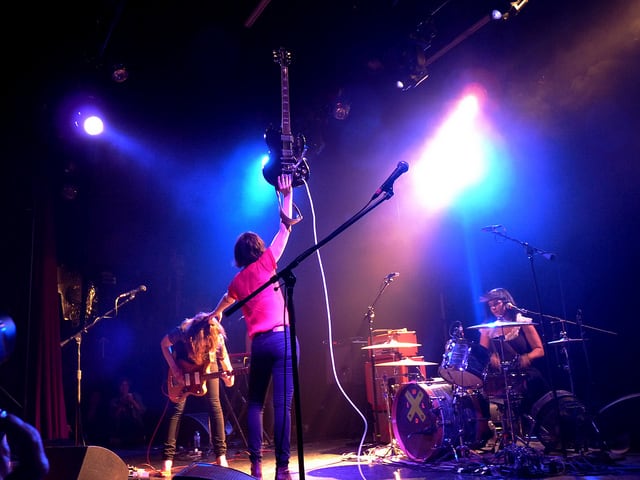 Now here’s something revolutionary: a concert bill where all three acts could easily headline their own show. I’m not sure about the economics behind staging such an event, but it certainly compelled me to arrive early at the Crystal Ballroom that chilly Friday evening to catch Portland-based openers EMA and the Thermals warm up the crowd for Wild Flag. The news of MCA’s death broke earlier that day and as the PA blasted one Beastie Boys hit after another, the crowd rapped along in joyous tribute.

I have seen EMA on four occasions in the past year and every time I’m more impressed with the growth of the group. With her hair dyed brown and shaved all around the sides, Erika Anderson led her band through a 40 minute set, debuting new permutations of songs from her acclaimed 2011 record Past Life Martyred Saints. With highlights including “The Grey Ship” and “Butterfly Knife,” Anderson stalked the stage, wrapping a string of white lights around her neck and body, creating a scary illumination around her imposing form. The crowd around me sang along with closing number “California,” which has already become an oversized kiss-off to the neighboring state to the south.

After a brief pause, the Thermals took the stage to rock a 50 minute set. Hutch Harris and company concentrated on material from The Body, The Blood, The Machine and later, leaving their first two records mostly untouched. The crowd went into hysterics as soon as the power trio began playing, moshing along to many of the songs. As the band has entered a more poppy phase with albums such as Now We Can See and Personal Life, the fiery Body songs will likely remain their masterwork. Songs such as “Here’s Your Future” and “I Might Need You to Kill” sounded great and with so much manic energy spent, it was amazing that yet another great band waited in the wings. Harris thanked MCA as the band wrapped up and left us anticipating more.

It was just past 11pm when Wild Flag arrived, beginning with the Mary Timony-led “Electric Band.” The Crystal Ballroom sounded great that evening, the separation between the vocals and the usual rumble of the bass and drum distinct and crisp. Over 70 minutes, Wild Flag bounced through most of the songs on their self-titled debut, some new tracks and a few covers. Carrie Brownstein took the lead on the second song, the more desperate “Future Crimes,” the influence of Patti Smith ringing through. Brownstein’s voice howled and wavered over Rebecca Cole’s tinkling keys.

For the rest of the performance, Brownstein and Timony traded lead vocals. However, Brownstein’s fiery stage presence tended to overshadow the more subtle frontwoman Timony. At one point, an audience member handed Brownstein a shirt that proclaimed, “I Love Spelt.” The “Portlandia” star immediately quipped back, “This is totally not true! No one likes spelt. We’ve passed spelt. We’re into Ezekiel bread now.”

As the band raced through the set, Janet Weiss gamely keeping time in the back, highlights included “Boom” and the extended, strobe-light-lit freak-out of “Glass Tambourine.” During “Racehorse,” Brownstein turned her back to the audience and lofted her instrument up into the air with one hand and the other on her hip, a guitar heroine in reverse. Wild Flag closed out their first set with “Romance,” a song Brownstein dedicated to MCA and described as their “only love song.”

The band returned for a four song encore that included covers of songs by Television and Fugazi. Wild Flag may have risen from the ashes of Sleater-Kinney and Helium, but the hometown Portland show capped off eight successful months since the record’s release. It will be exciting to see where they go next.