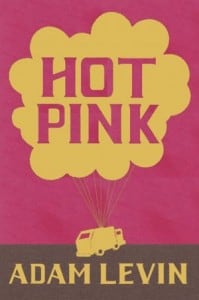 [xrr rating=4.5/5]Adam Levin’s The Instructions should have been a bigger deal. Sure, it received a fair amount of publicity and rave reviews when McSweeney’s published it in 2010, but insular literary credibility isn’t enough for a massive (and massively entertaining) monsterpiece about violence, Judaism, analytical thinking and middle school. In a better world, the reading public would have devoured it like it was The Hunger Games. Levin’s follow-up, the deceptively slim short story collection Hot Pink, is unlikely to correct this injustice, but it provides ample confirmation of Levin’s status as a major new writer. Across 10 richly imaginative and startlingly funny stories, Levin etches onto the reader’s consciousness his weirdly appealing worldview: playfully cockeyed, intellectually intricate and fully attuned to his own vision of the human emotional spectrum.

The opening story, “Frankenwittgenstein,” demonstrates the clear and welcome influence of George Saunders, under whom Levin studied at Syracuse University. Saunders – an infinitely empathetic humanist – is the master of imbuing desperately sad situations with humor and hope, and it’s this characteristic (rather than Saunders’ more vaunted but less remarkable gifts as a satirist) that Levin emulates to great success. The story concerns the dissolution of a family following the father’s obsessive failure to create a girl’s doll that discourages eating disorders. In a scant 16 pages, Levin gracefully compresses a world’s worth of details about this collapsing family structure before ending on the perfect note of guarded optimism. The short story may be the ideal format for tales of dysfunctional families, and it’s hard to imagine one more concisely poignant than this.

Levin is particularly adept at writing about adolescents, whether the hyper-intelligent messiah wannabe whose convoluted psychology splattered the thousand-plus pages of The Instructions or the more ordinary (but no less complex) kids struggling with themselves and others throughout Hot Pink. In “Finch,” Levin nails the teen impulse to quantify and catalog one’s social life (“That was the first day of the fifty-four-day run of me and Franco hanging out together”), the weird co-dependency that sometimes crops up between uncool outsiders and disreputable bullies and the youthful capacity for violence and loyalty and regret. It’s a story that deeply respects the conundrums of adolescence, and gives them a voice both beautiful and entirely distinct from that of psycho tween Gurion in The Instructions. “Considering the Bittersweet End of Susan Falls” continues Levin’s fascination with teen precocity, his young disabled heroine lost in elaborate fantasies of past and present before Levin breaks the spell with an abruptly tragic ending, one of the many fearless narrative bombs that Levin lobs throughout the book.

The longest story, “Jane Tell,” is the collection’s only real misfire. Using a therapist as a didactic mouthpiece for character foibles is pretty much always an unwise idea in fiction, and here Levin compounds the problem by delving into the behaviorist theories of B.F. Skinner. In the context of a novel, this kind of extra-textual exploration might have paid off, but in a short story, it feels like padding. Indeed, “Jane Tell” is the only piece here that reads more like an excerpt from something longer than a fully reduced and compressed work of short fiction. Furthermore, the central romance between a drug dealer and the unstable, violently masochistic girl he meets at an anger-management meeting is too self-consciously edgy to be convincing, landing more shocks than insights.

Still, Levin’s willingness – or, perhaps, his natural inclination – to take high-wire risks is more often productive than not. Several stories delight in formal experimentation: “Relating” comprises a series of brief flash-fictions, variations on the theme of the difficulty of communication; “RSVP” presents a story within a story within a—well, I won’t spoil the devastating reveal, but the title is a clue; and “How To Be The Guy” takes the disturbingly brilliant form of an instruction manual, once again limning the social rituals and latent (or not-so-latent) physical violence of adolescence and making an unexpected callback to a concept introduced in an earlier story. But for all Levin’s goofy gambits and strange conceits, his work remains fundamentally and delectably readable, whether the page count is in triple or quadruple digits.