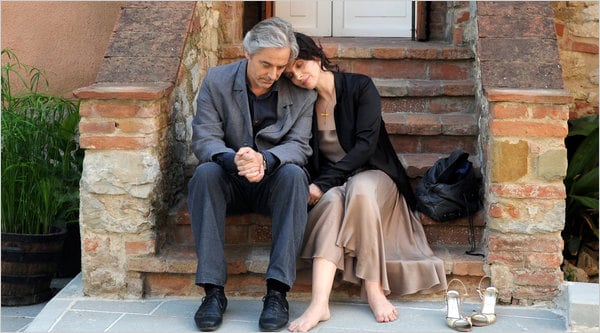 Certified Copy tips its hand early in its opening passage, in a speech by author James Miller (William Shimell) that might as well be director Abbas Kiarostami showing up to introduce the film himself. “I think a copy has just as much worth as the original,” he says, summing up a lecture that will be spun off into different permutations and puzzles throughout this fantastic film. Brilliant, playful and warm, despite a pulsing intellectual core, its discourse evolves through a running battle between Miller and the unnamed She (Juliette Binoche), as games turn into mysteries and copies of copies steadily fill the screen, like flower petals blown in the wind.

The film further cements Kiarostami’s place in the upper echelon of world directors, with a seamless leap from his native Iran to the loose-bordered of cosmopolitan Europe. To be fair, his themes have always been universal, and the culture shift doesn’t require a great change in style; Certified Copy shares a lot with 1999′s The Wind Will Carry Us spinning an achingly tender story of transition obfuscated by a cold frame of cerebral rigorousness.

Certified Copy stands out as Kiarostami’s fourth certified masterpiece, following his three great works of the ’90s (Close Up, Taste of Cherry and Wind), pursuing a similar truth-vs-fiction bent, working out ideas and theories that seem to be in a constant state of flux. It’s hard to think of a director outside Godard who’s as capable of integrating theoretical and philosophical into dramatic stories, and as a counterpoint, Kiarostami’s films are as humanist and inviting as Godard’s are clinical and confrontational.

This one accomplishes that feeling by pursuing two aims, one intellectual, one emotional, running on parallel, closely related tracks, where the film’s ideas on duplication are simultaneously developed and torn to shreds. Throughout this the two main characters stare into mirrors and out windows, contemplating themselves while facing down the audience, in small moments that serve as character examination and a confrontation of the form’s inherent artificiality.

She is charged with guiding visiting author Miller around this small Italian town, which he’s visiting for a speaking engagement about his book, which examines the symbiotic relationship between genuines and fakes. She takes him to a shrine, where a golden tree draws newlyweds, incited by its reputation for bestowing good luck. The two bicker and argue, embodying an award tension that suggest either an instant clash of personalities or some pre-existing conflict. Then a friendly barista confuses them for a married couple, she goes along with it, and the film transforms steadily from here. 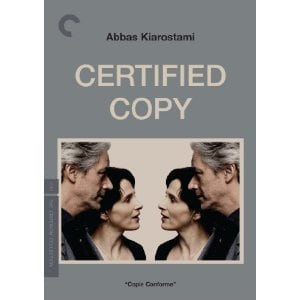 It’s a further testament to Kiarostami’s skill that he manages to take a conceit which might seem more at home in a sitcom, a silly and inexplicable game for two adult characters to be playing, and turns into something so breathtakingly painful and moving. The rapport the two establish, helped along by Binoche’s forceful performance and Shimell’s bemused impassiveness, is fully engaging on its own.

It’s pushed into transcendence by the dizzying development of the director’s ideas, which weaves itself between character narrative and intellectual film essay, finding time for beautiful visuals and fully conceived incidental characters. One scene, where the two pose for a forced photograph with a newly married couple in the background, while a lone bride dabs her wet eyes in the foreground, is a masterpiece of mystery, visual flair and emotional economy.

Kiarostami feels so tenderly toward copies because, in his view, we are all duplicates ourselves. The baggage these two characters bring to their relationship, whether unique to it or sublimated from past love affairs, draw from generalized concepts of human experience: feelings of neglect, doubt, fear and bitterness. As the film progresses, the brides seem to multiply, all of them dressed in white, looking pure and hopeful. They serve as a counterpoint to the protagonists’ damaged bond, but also a greater hope for humanity, which despite everything keeps on making copies of itself.

(This review first appeared on Spectrum Culture on 03/13/11)