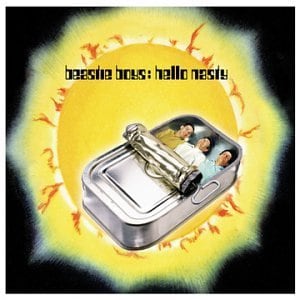 Paul’s Boutique must be the most successful fake business of all time. Since its release, Brooklyn’s Beastie Boys’ masterpiece has influenced the sound of hip-hop for two decades and counting, as well as their own internal sense of composition. Not to make it sound like they’ve been derivative: quite the opposite. The raw energy and eclectically tight smash-up of samples that the Dust Bros laced the boys with was only a stepping stone, albeit a brilliant one. While Paul’s did the rare thing of breaking the sophomore slump and establishing the group’s legitimacy, their catalog only evolved and refined since them. Their 1998 release Hello Nasty was met with solid sales and critical acclaim, but has been direly overlooked in favor of older records and their 21st century comeback, To the 5 Boroughs. Hello Nasty is almost the perfect storm of a Beastie Boys record, in that it’s a thorough meshing of every iteration – their grungy debut, the variety of samples and sequencing from Paul’s Boutique as well as their instrumental prowess and experimentation from the Check Your Head and Ill Communication era.

“The Grasshopper Unit (Keep Movin’)” features slick, bass-heavy production and opens with a reference to someone “Thurston Howlin’,” which proves the boys hadn’t lost any sense of their playfulness. Some critics praised the production of the record and said the lyrical content was unsurprising, but frankly, any album that features the phrase, “I’m the king of Boggle/ There is none higher/ I catch 11 points off the word quagmire” doesn’t have to prove itself to anyone, as “Putting Shame in Your Game” does with its ominous click track production, sounding like the RZA dodging laser blasts. “Unite” also features a spacey and warped out synth line, brought to life by Mix Master Mike’s animalistic scratching and one of the dearly departed MCA’s finest bars: “I got books with hooks and looks like rain/ Will someone on the Knicks please drive the lane?” The Beasties have always been well regarded for their video content and Hello Nasty proved to be a rich and fertile ground for them. “Intergalactic,” the big single, aside from being a synth-soaked and bass-rattling piece of time-displaced Beasties genius, also provided with one of the band’s most beloved cuts.

One of the things the boys always do well is meter out instrumentals, giving their albums a good stride and pace, and on Hello Nasty these are expertly timed in, almost giving the listener a break from all the crazy. “Song for Junior” could easily have been a mix-in on “B-Boy Bouillabaisse” with its slinky tropic groove and flute interludes – it miraculously sounds like a different band and yet so familiar at the same time. Strangely, this tends to signal a change of tone for a bit, as it’s followed by the mildly melancholic and noticeably down-tempo “I Don’t Know,” where a flighty acoustic guitar line meets with hushed vocals – it’s a baffling transition, but not necessarily a bad one. The energy soon picks up on “The Negotiation Limerick File,” a prime contender for Best Song Title Ever. Over a glitchy, digital horn and even a sly cowbell line, all the doubts that one could have over the group’s diversity are suplexed into submission and the inclusion of Lee “Scratch” Perry on “Dr. Lee, PhD” is like the one last zinger on the way out – impeccably timed and all the more resonant for it.

Hello Nasty is fantastic and as a Beastie Boys album it’s even better. It’s not as frighteningly original as some of their earlier and even later output, but it’s a confident and thoroughly complex record that proves their dedication to the craft. At 13 years in 1997, they could have been content to coast on name alone, but through their career they have only managed to strengthen their core as absolute musical geniuses. Hello Nasty is a rooted and powerfully diverse battle-cry from a group that could never, ever be accused of jacking someone’s style. With this album, it’s the Beasties who proved they are the ones getting jocked like Jeter and whose influence will live on like Celine Dion!