September 27, 2020
Home Food No Manwich Tonight and Other Ways to Improve Your Life: Stuffed Peppers 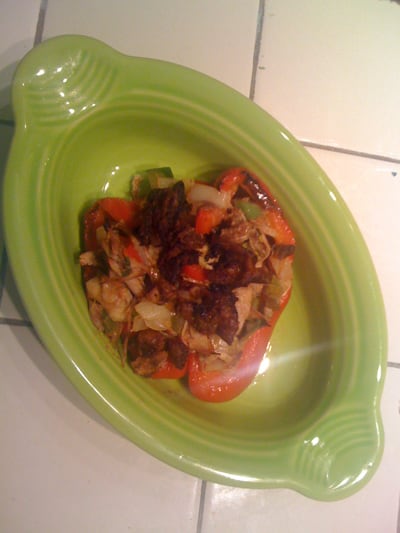 Stacey: Tom, when you said, “Quick question: Can you get duck in Philly?”, I found myself answering you in the affirmative with a completely unfounded confidence, like, “Hellz yeah, that is so not a problem. I can get duck anytime of the day OR night. Yeah, it’s totally true that there’s so much available duck in Philly that I see all the time that it’s easy so yes definitely!” See? I wasn’t even making sense. But I did it! As I write this, there are four duck legs defrosting in the front seat of my car, and no one is more surprised than I am that this has anything to do with stuffed peppers. As I know it, stuffed peppers are more like a “hamburger in a veggie cup” type thing. When Mom and Dad make it, we have to give each pepper a good three shakes in the tongs before serving, as the lot of them are baked standing up in a water bath. Does this recipe call for a healthy squirtle of ketchup? Something tells me no.

Tom: No ketchup! (I’m slamming my fist down on the desk) I’m glad you answered with unfounded confidence because, secretly, I was wondering if you could get duck with unfounded arrogance. I might have been asking you to simply procure our aquatic friend, but on the inside I was thinking to myself, “Good luck finding that in Philly, pffft.” It was my New York exceptionalist jerk-wad side shining through, as if finding mildly obscure ingredients was the sole provenance of New Yorkers. It’s not like Philadelphia is some out of the way Nova Scotian satellite island that gets a food delivery once a week. Hardly. I’ll even confess, I find your native city quite charming (sports teams aside). Anyway, duck. Listen to me Stacey, duck is the meat of the gods, you’re in for a treat. The evil scientists who concoct frozen foodstuffs could never dream of a filling so righteous to stuff their peppers with.

Preheat the oven to 350 degrees.

Heat a large oven proof pot or large skillet (that has a cover) over medium heat and add the canola oil. Once hot, brown the duck legs, skin side down first, this should take 5-8 minutes. Flip them over and brown the other side for three minutes or so. Remove when fully browned and set aside. Keep the skillet over medium heat and add the carrots, onions and celery and cook them until they are soft and translucent, about 3-5 minutes. While they are cooking, thinly slice two cloves of garlic and add them. Cook for another three minutes and then add the red wine, red wine vinegar, chicken stock and fish sauce. Season with salt and pepper, place two whole thyme sprigs in the broth and let that come to a boil. Once boiling, turn the heat to low, add the duck legs, cover the pot and stick in the oven for an hour and a half.

Stacey: Hmmm, I see before me many, many vegetables that need to be chopped up. If only there was some sort of kitchen device that could assist in “processing” this food! Oh wait, oh right. Dammit. Well, all I got at the moment is one big Hitchcockian “Psycho” knife and a few IKEA steak knives at my disposal. OK, this might take a while so… music. It seemed like the right time for the bittersweet MCA tribute I suspect we’ve all been holding lately. Also, if anyone might possibly shout out “stuffed peppers,” “ratatouille” or even “duck legs,” in their lyrics, my guess is that I’d hear it from Ad-Rock. I don’t have to tell you how much fucking fun it was to dice celery, shake my rump and get all “Beastie Boys known to let the beat/ Mnnnnnn…drop!” Best feeling.

For the ratatouille: (do this whilst the duck is a-cookin’)

Stacey: I love how that sounds all Bugs Bunny cartoon…

Tom: Can you tell I have a four year old whose taste in cartoons runs old school?

Put a sauté pan or skillet over medium heat and add two tablespoons of olive oil. Add the onions and peppers to the pan and cook for five minutes, until they have softened. Add the zucchini and tomatoes next and cook them for five minutes. Add the eggplant last and cook it all together for another three minutes. Season with salt, pepper and the chopped thyme, add about 2-3 tablespoons of chicken stock. Let that come to a boil and then take it off the heat.

Take the last two peppers and halve them. Brush them with olive oil all around. When the duck is 20 minutes from being done, put the halved peppers on a baking sheet, cut side down, and put in the oven for those remaining 20 minutes.

Stacey: OK, I won’t lie. It was right about now when my boyfriend said, “It’s 10pm, I’m going to Wawa to get a burrito,” and I might have asked him to pick up a hot dog for me. Seriously, chopping that much by hand with shitty utensils and zero technique took forever. And my mood had taken a dive as the Sixers were tanking Game 5 against the Celtics. A stuffed pepper might’ve made more shots than Jrue Holiday did in the second half.

Tom: At this point in our little experiment I’m thinking we might have put the cart before the horse. A big, decked out, 18 wheel cart in front of the horse. Maybe we should try out some simple things like knife technique before all this gourmand lunacy. Also, the fact that I reside squarely in the middle of the Philadelphia/Boston sports continuum prevents me from commenting on said teams. If you have nothing nice to say…

Take everything out of the oven but keep it on. Put the duck legs aside on paper towels or a plate. Keep the roasted peppers on the baking sheet but flip them over. Once the legs are cool enough to handle, separate the skin from the meat and set the skin aside (sweet, sweet duck skin, ahhh…). Shred the meat using your fingers or a fork if that’s too ugggh for you. Mix the meat with the ratatouille and spoon enough of the mixture to fill each of the four halved peppers. Quickly wipe the skillet the ratatouille was in clean and put it over medium heat with two tablespoons of olive oil. While that’s heating up, put the stuffed peppers in the oven for 10 minutes. While the peppers are cooking, take the sweet, sweet duck skin that you set aside, dice it and then add it to the hot skillet. Cook until brown and crispy. When you take the peppers out of the oven, top with the crispy duck skin and serve immediately.

Stacey: Wow. Well Tom, I know how much of a duck guy you are, and now I feel like I have this illuminating insight into your Tom Volk-ness having shared this culinary conversion with you. I get it; I so get it. The duck meat has a perfect pungency in this dish that is otherwise so earthy and fibrous. Chicken would’ve been too bland – and as a result of this baptismal experience, I can barely bring myself to even mention ground chuck. Honestly: ground chuck? It embarrasses me!

Lastly, the duck skin. Yes, the very idea is yuck to me, and I know as a meat-eater that that is an untenable position, and yet the reticence is real. In the rare instance that I’m cooking and have to deal with icky bits like skin and fat and other unidentifiable anatomical things, I find myself saying out loud something like, “It’s fine it’s fine it’s fine,” and then huff out a final “Ew!” when it’s all said and done. I thought the duck skin was just like a tangential “circle of life” garnish here. Is it weird to say I feel like it makes the whole dish? The crunch! The saltiness! It totally saves this from tasting like a mouthful of fleshy vegetables. Oh, the terrors and the rewards of being a guilt-stricken carnivore…

Things to think about/remember: Price out Cuisinarts or consider employing a line cook. Knife skills may deteriorate in proportion to steep declines in foul shooting percentage. Duck is the new hot dog. And Check Your Head is underrated.

Thanks, friend! You’ll be relieved to hear the ketchup bottle remained securely holstered in the refrigerator door…

Tom: Oh thank god. I think if we’ve learned anything tonight it’s that duck skin is your friend and that I will now have to fight the urge to say that things have a certain Volk-ness as much as I like the sound of that.