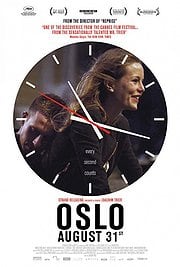 [xrr rating=4.0/5]Oslo, August 31st follows Anders (Anders Danielsen Lie), a recovering drug addict, through a 24-hour period, beginning on August 30th and creeping into the early morning of the 31st, as per the film’s title, at which point Anders injects a potentially lethal dose of heroin. That the dose is lethal is hinted at by director Joachim Trier’s choice of source material, a novel entitled Le feu follet by Pierre Drieu la Rochelle, in which its protagonist, an alcoholic, does indeed commit suicide. But this detail is largely inconsequential, because Trier’s film is not primarily about life and death but about the individual and society: Anders’ final act rewires the entire film and forces us to look at his actions in a new light, seeing his rejection of recovery and sobriety as a rejection of conventional life within society. Despite our near-universal consensus of disdain for heroin, Trier skillfully brings Anders’ interior state to life to such a degree that we regard his final act as being somewhat courageous, however improbable and ghastly this might seem. This is a painfully bitter pill to swallow, but it’s also the truth about Anders that Trier discovers as he digs with grubby fingers through the dirt of Anders’ life. If we cannot accept this final act, it may be because we will happily never end up like him, but Anders’ actions nonetheless quietly call into question our established sense of normality.

Anders is a deeply unhappy man, and watching him throughout the film feels progressively like an act of self-harm on our own part, awaiting impending doom. Self-preservation is the principal rule of the human race, and it is particularly uncanny to watch someone actively work against this biological dictate. In fact, though cinema has broached many controversial topics, it has rarely dared to present with sympathy and understanding a suicidal protagonist, one who moves about like a limp body always waiting for the end. Recently, Lars von Trier captured this so stunningly in Melancholia, whose affectless protagonist Justine resembles Anders here. What unites both films beyond their surface plots, though, is an interest in their characters’ underlying condition, more spiritual or metaphysical than psychological: on some level, Melancholia’s depression and Oslo, August 31st’s addiction are the same form of blight. It’s an aspect of human experience few want to face, and consequently, it’s standard in films to use suicide as a shock device, as if to emphasize how unthinkable the act is for the audience. Mia Hansen-Løve’s recent The Father of My Children used suicide as a non-gratuitous and effective plot device, one that focused our empathy on the surviving family as they attempted to make sense of their lives in the aftermath of losing their father. But with Oslo, August 31st, Trier has crafted a film with a self-destructive protagonist whose own plight engages us in unexpected and surprising ways.

Trier’s protagonist possesses a calm, inscrutable surface that barely registers the churn of emotions underneath. This forces us to observe him more deeply and attentively. There is an impermeable boundary between him and us, rather like the gulf between those who suffer from addiction or depression and those who, having had no similar experiences, try in vain to understand them. Anders Danielsen Lie is an ideal actor to embody this character: he’s entrancingly handsome in a moody sort of way, yet he exhibits an emotional reticence, as though drawing himself inward, transforming his face into a mask. This aloofness defines Anders’ identity. In a job interview, he becomes flustered when asked about a gap in his resume, and he proceeds to admit that he’s a recovering junkie. But his forthrightness here also seems like a barely perceptible taunt, the type of risk a man sincerely devoted to recovery would not likely take. This ambivalence is complex and tangled. After the interview, Anders sits in a cafe, and in a virtuoso sequence, Trier shows how his attention shifts from one banal overheard conversation to another. We cannot decide what to think here: are these conversations really so vapid as to deserve Anders’ apparent scorn, or do they actually indicate that everyone around him is healthy and happy, that this is how “normal” people talk? Either way, it’s clear that Anders sees himself as being on the other side of a wall separating him from this “normality.” More troublingly, it’s not even clear that he wants this to change.

After the blown job interview and a failed attempt to see his sister, Anders goes to a party where he begins drinking. The moment he picks up the glass should make a knot form in the pit of any viewer’s stomach. The incident is tiny, but it’s the trigger that could lead to the end of a recovering addict’s life. Anders no doubt understands this—he demonstrates an advanced intelligence throughout the film—and maybe even desires to rebel against the determinism of his addiction, the feeling that he does not control his own life. From that point in the film, Anders descends into self-destruction with a directness that is absolutely horrifying. In an ensuing club scene, Trier’s camera conjures up a beautifully nightmarish vision, at once attractive and repulsive, the culture of hedonism splayed and left for dead in a dingy alleyway. After dawn, Anders takes the heroin he purchased earlier to a house owned by his parents. He plays a piece of classical music on his family’s out of tune piano—a symbolic gesture that would seem gracelessly overt if it wasn’t such an endearing cry for help on the part of Anders—and then proceeds to inject the heroin. It doesn’t seem far-fetched that an intelligent, resourceful man like Anders could stay sober. But in this case, it doesn’t particularly seem like he wants to join the rest of society, and his final, suicidal act implicates the conventional life he rejects in a haunting, unforgettable way.