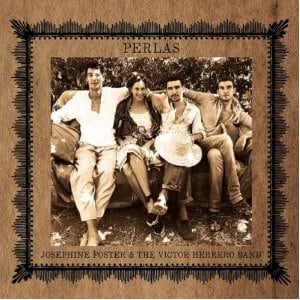 [xrr rating=4.0/5]Here in the virtual offices of Spectrum Culture, over by the virtual water cooler/Keurig nook, I was asked how I was enjoying Perlas, the latest collection of Spanish-language folk selections from Josephine Foster & the Victor Herrero Band. “Where’s she from again? Argentina?” “Hmmm no,” I replied, “I want to say… Brazil? No, that would be Portuguese then. Why can’t I remember?” Turns out the answer is a territory that is a little further north: Colorado. Ah. What’s more dislodging is the stranger question I kept returning to: When is she from? Forget contemporaneity. The experience of listening to Perlas brings to mind clothes pinned slips fluttering in the pre-noon sun, a bare foot marking time on a drought-dusty plank floor, long tendrils of hair that have escaped being gathered up in mother of pearl hairpins.

Perlas is romantic in that lost time, attic photograph way; centuries bend as the here and now disintegrate. Foster’s classically trained voice wavers with a papery vibrato that begs for the pop and scratch of a gramophone recording. Foster’s husband Herrero and his bandmates emphasize this traditionalist aesthetic with use of Old World instruments – charango, ukulele, harp, Portuguese guitar – the plucky chatter of the lighter instruments is an acoustic contrast to (and reflection of) Foster’s own ribbon-like voice.

Foster and Herrero’s previous work, Anda Jaleo, was a reworking of Federico Garcia Lorca’s Las Canciones Populares Espanolas, a collection of then-controversial songs the poet put to paper in the early 1930s. Perlas continues this entwinement with literary tradition, though unlike Jaleo, it commits to a wider homage, drawing from traditional songs as well as poetic works. “Peregrino” is a musical interpretation of Miguel Machado’s poem of the same name. Foster shares vocals with Herrero and a third male voice, and like the traveling etymology of its title, the tune shucks along like three friends on an aimless excursion. Adding a bit of dramatic humor is a break between stanzas wherein the ukulele shimmies up and down the fretboard, an entertainment that causes one to imagine the player in a grimace of silly exertion, companions applauding for the effort as the verse picks back up.

“Sangre Colorada” is similarly light – a flirtation between harp glissandos and happy-hearted arpeggio picking – but the moods of Perlas do extend to petulant depths. Guitar strumming abruptly charges and halts in “Abenámar,” a song that summons Foster’s operatic pedigree, as sustained breaths glimmer and trill like a spirited singing saw. The title track also taps into that interplay of invitation and refusal; the arrangement of “Perlas” presses with the Flamenco-style aggression of Herrero’s guitar, yielding into a temperate duet that by degrees escalates into a fortissimo reiteration of acoustic argument. That the percussion consists solely of Herrero’s knuckles knocking on the guitar body only heightens the sense of improvisational immediacy in composition and intimacy between performers.

What’s surprising – and perhaps of little consequence, when all is said and done – is that this style of music is just one among several of Foster’s creative incarnations. Having recorded German lieder, psychedelia, an album of children’s songs and a solo project based on Emily Dickinson’s poems, it’s hard not to feel a little… crestfallen upon discovering that Perlas is not a blood relation of the principal artist. But that is a tangential quibble, and one that sidelines the force and inspiration of Victor Herrero, whose emotive guitar playing truly provides the record its breath and pulse. Don’t understand Spanish? Never mind the translations, Perlas will speak to you anyway.