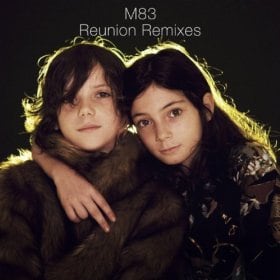 [xrr rating=3.5/5]For the uninitiated, M83’s “Reunion” is Hurry Up, We’re Dreaming’s second single, and as an EP it comes packaged with six remixes. The original kicks off with an Edge-sized guitar riff and criss-crossed percussion, M83 principle Anthony Gonzalez’s falsettos and pitched, emotive peaks counterposed against sighing backing vocals. Driving New Order collisions of drums and guitar prop up spacey synth, and whispered spoken word portions provide amply-sized breathers for the rush at each end of the track. The remixes are as follows.

Dale Earnhardt Jr. Jr. opts for simple stamps of percussion over the original before laser rays of synth wind their way in. With Gonzalez’s harmonizing cut up and placed in the background at the start, his later deeper croons and moans as well as the ethereal backing vocals are sliced up into the steady step deeper in the remix. The result mutes, almost annihilates, the most thrilling aspects of the original – at least at first. The back half, however, picks up seemingly as an afterthought only before exploding into shimmery, breathy textures adorning the peaks and valleys of every beat. The Detroit indie poppers responsible for the remix wisely resist the natural desire to let loose the canned track’s urges until an almost penultimate moment, to recuperative effect.

Starting off with a standard rhythm on his remix, U.K. artist Sei A buries Gonzalez’s vocals in the back, and the sampled track begins its life in its own remix as only a murmur. Like its predecessor, this take centers on the “ohhh-oh-oh” that acts as one half of the song’s chorus. The monologue of the original is sampled directly in this remix, brought out to the foreground more fully than on the original and given some spooky backing atmosphere. Fading out almost entirely before coming back in even greater force, the track transitions to a witchy reverie, retaining only the original’s time signature and never returning to Gonzalez’s vocals, only pausing a moment to take a clip of the spoken word again before winking out.

Polly Scattergood and the Naked & Famous round out the EP’s middle reinventions. Scattergood’s applies a choppy, quirky swirl and draws out Gonzalez’s delivery to match the rhythms’ cadence. She even opts to bring in a bass riff off a Justice record. Finally, Scattergood scales it way back, dropping the beat out of “Reunion” entirely and allowing only splashing tones and bare percussive patter. By contrast, Kiwis the Naked & Famous opt for something decidedly ambitious, even if the intro is more understated. Turned into somewhat of an M83 interstitial, the spoken word is front-loaded and heavily processed. Later, stirring guitar, persistent drums and chiming textures that squeak in and out of existence are added, soaring indie rock guitars atop it, and, as textures sparkle in the background, a piano outro.

Scottish electronic musician Mylo’s remix lends a more complex, funky techno rhythm to the track, turning it into a straight dance-floor number. Added double bass tones hop up the ends of synth lines, and a spaced-out strum fills the ample room in back. Handclaps and rapid-fire guitar lines give it a Daft Punk sheen. Polytonal guitars recall bagpipes, and round keyboard tones with the original track’s later, breezier sighs carry the tune out. It’s one of the more interesting, but also more straightforward takes, essentially carrying the danceability of the original to its logical conclusion.

White Sea’s Morgan Kibby, who doubles as M83’s backing vocalist, reimagines “Reunion” as dubstep. Textures surface out of nothingness as bass rides the floor, handclaps and synth strings flittering in between glitchy cut-ups of Gonzalez’s vocals. A twitch of a track overall, movements fall in and out of the tune, pitches and arrangements begun and ditched, then repurposed moments later. A crushing beat and crunch punctuates later loops of Gonzalez’s vocals, with tubular textures popping off in the background. Kibby dubs herself into the last minute, as her haunted, subdued howl, layered carefully with intertwining versions of itself, fades as the track does.