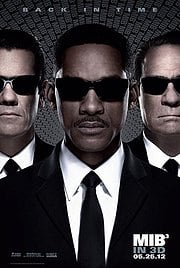 [xrr rating=3.75/5]The Men in Black franchise has always been anchored by two things: the thorny relationship between Agents J (Will Smith) and K (Tommy Lee Jones), and crazy-ass aliens. Throw in a few new space guns (as J repeatedly refers to them), some snarky references to weird celebrities being aliens and an extraterrestrial threat to the Earth, and you’ve pretty much got a template to repeat ad infinitum. It’s a bit strange, then, that Men in Black III took 10 years to develop, despite having the same stars, director and producers (basically) for each installment. It’s even more curious that despite the lengthy delay, it’s essentially the same movie as the previous two entries. Fortunately, J, K and freaky aliens in disguise are still pretty much as fun to watch in action as ever.

MIB3 begins with a busty young woman (Nicole Scherzinger of the Pussycat Dolls) going through security in a high tech prison, the name “Boris” prominently tattooed on her back. Turns out the Boris in question is an alien assassin (Jemaine Clement of “Flight of the Conchords”) who has been locked up for 40 years by K, and has a grudge to settle. Oh, also a missing arm and a weird spider creature thing that crawls into his body and kills people. Meanwhile, J and K are experiencing communication difficulties, as K seems extra cantankerous (given to bitch slapping alien restaurant owners with their own living ET-crayfish, for example). Shortly thereafter, J wakes up and K has been dead since 1969, killed in action.

As it’s been prominently advertised, I don’t think it’s much of a spoiler to say that the plot involves both J and Boris traveling back in time to the ‘60s, the former to stop future Boris from killing past K and the latter to keep past Boris from committing the same mistakes as future Boris. Got it? As time travel plots go, it’s not terribly complex, though it still has a few typical points that could either be described as paradoxes or “plot holes.” There is an innovative usage of time travel late in the climax of the film as J and Boris finally square off, but MIB3 is far more concerned with watching J and K banter and quarrel. And frankly, that’s by far the best route to take; Jones’ stoic brevity has always played remarkably off Smith’s quips (and vice versa). A huge part of the pleasure of the MIB films is the “Odd Couple” effect of pairing the two, and MIB3 is no exception. Which brings up a problem: what happens when K is erased from the present for the majority of the film?

Answer: Josh Brolin. As the 1969 version of K, Brolin pulls off the remarkable feat of assuming Jones’ mannerisms, but also legitimately seeming like a younger, less cynical version of the same character. It’s an eerily good portrayal of the character, surpassing imitation to the point that it’s difficult to not actually consider them the same person. In other surprising turns, Clement is genuinely threatening as Boris (surnamed “the Animal”), coming off as physically intimidating and prone to roaring at hippies. Even a minor role, the dimwitted son of a super criminal (Michael Chernus), is played well, essentially playing a snarky, easily amazed slacker to J’s snarky, easily confounded hipster. As it’s an MIB movie, cameos naturally abound, the cheapest being a quick screenshot of Lady Gaga and the best being Bill Hader as a short-tempered Andy Warhol who can’t stand Yoko Ono or painting soup cans for much longer. Once J has traveled back to the 1960s, there’s a few moments of “Hey, weren’t the ‘60s rough for black people?” but it’s handled remarkably well, and if the period costumes aren’t as spot on as “Mad Men,” they’re pretty close.

On the downside, the film does have a tendency to a sentimentality that doesn’t really feel earned. In particular, one character (who if I heard right, is a fifth-dimensional space unicorn, which should have been a lot more awesome) essentially acts as a roving plot device the entire movie, using a kind of omniscience to lead J and K to their goals and in one cringe-inducing moment, breaking the fourth wall. In addition, a time travel loop that reinforces the relationship between J and K feels both unnecessary and mawkish; it’s not that it feels tacked on, but rather feels like an attempt to make all the chronology seem too tidy.

But MIB3 succeeds far more often than it fails, particularly as a long-delayed third entry in a movie franchise that doesn’t even pretend to be wrapping up any kind of saga. Smith and Jones (and Brolin) still have what it takes to entertain on screen, and the crazy-ass aliens are still suitably weird and laughable. That’s all one should really expect from the Men in Black, and they keep delivering it.