First of all, let’s get this out of the way: Braveheart is not a hugely overrated movie because Mel Gibson is a crazy person. It is not overrated because of his bizarre public meltdowns, his raving misogyny, racism or religious beliefs. It’s certainly not overrated because he coined the term “sugar tits.” Braveheart is mediocre and almost ridiculously over-praised on its own merits, thank you very much. As a historical epic, which is how it is invariably described, it’s cartoonishly inaccurate, it’s tepid as a romance and its best action sequences involve hairy men in make-up lifting their skirts (which I’m pretty sure should be in a very different kind of movie). And if you don’t think Braveheart is critically lauded, keep in mind that when it was released in 1995, it won a bewildering five Academy Awards, including Best Picture.

Yes, Gibson’s epic story of the 13th century Scottish fighting against the hated English beat out Apollo 13, Babe and Leaving Las Vegas (which was tragically not even nominated) for the Academy’s best movie of the entire year, and Gibson himself was even awarded Best Director. And I will admit, Gibson does have an eye for making the Scottish highlands look gorgeous and misty (not that that’s all that much of a feat) and a commendable commitment to continually making himself appear to be the deadliest, most noble man in the world and also good at speeches. But as a film, Braveheart has three consistent faults: it’s as much a historical film as Watership Down is a documentary on rabbits, it’s wildly xenophobic and finally, it doesn’t make you care a damn about its characters. We’ll start with the first one, little readers. 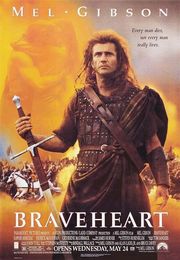 Regarding the historical accuracy, it’s been widely documented that Braveheart isn’t so much accurate with facts as it’s laughably devoid of them. Just for a few examples: that belted plaid finery you see William Wallace and his noble Scots brethren wearing as symbols of their indomitable, proud culture? Scotsmen wouldn’t wear that sort of thing for about another three centuries, so basically that’s like watching Gone with the Wind and seeing Scarlett O’Hara wearing Queen Elizabeth I’s dress. Here’s another: the story of Braveheart is directly inspired by 15th century poet Blind Harry’s The Acts and Deeds of Sir William Wallace, Knight of Elderslie, although screenwriter Randall Wallace felt fit to change events and characters to punch up history for the big screen. To shorten that up a bit, Braveheart is based on a poem composed almost two centuries after the events described took place, then further changed to make sure there was a romantic subplot. That’s truly comparable to a centuries-long game of Telephone that somehow ended up winning five prestigious awards. I’m not even going to get into the film’s implication that Wallace knocked up Princess Isabella of France (Sophie Marceau), presumably so that Edward III was secretly the son of a kick ass Scotsman and not an effeminate Englishman.

And there’s the next thing. Without exception, the English in Braveheart are evil, cruel, conniving, idiotic or gay. I certainly don’t mean that last one as a pejorative, but Braveheart sure does. In a movie that lionizes straight masculinity (which seems to mean dirt, violence or being able to throw rocks accurately), there’s two characters that skew from that and one gets thrown out a window. Not really all that awesome of politics going on there. Similarly, though King Edward I (the great Patrick McGoohan) instituted a permanent Parliament, created an organized system of taxation when most sovereign rule was barely above fancy banditry and established national statutes of law, all it takes is the fact that he was English to make him the bad guy. Every English character is evil by definition, rather than by motivation. The most sympathetic action displayed from an Englishman in the movie maybe be a foot soldier briefly showing shame at the brutal execution of Wallace’s wife (Catherine McCormack)…after just attempting to rape her, naturally. And mind you, all this is in a film made by and starring an Australian, written by an American and produced by American film studios, two nations that might know something about the conquering and decimation of aboriginal cultures.

Worst of all, the English are not the only one dimensional characters in Braveheart. Virtually every character has a single attribute that defines for the entire film, with no real character development or growth (with the possible exception of Isabella, who gains the power of self-reliance and confidence after being boned by the amazing Wallace). There’s the big lunkhead of a Scot, he’ll remain dopey from childhood to the end. There’s the crazy one, he’ll just act crazy. The gay prince acts effeminately, Wallace’s wife is pretty much only there to be an object of vengeance, even Wallace’s brief turn from not wanting to quarrel with the English to wanting to kill every last one of them is inevitable and built into the structure of the film, not actual growth. It’s a movie full of straw men, all existing only to lionize the nobility and sacrifice of Wallace. For a film that’s ostensibly about cultural pride and FREEEEEEEEEEEEDOM, it’s remarkable that every single character is subjugated to the service of making its star and director look awesome. That doesn’t sound too noble to me.