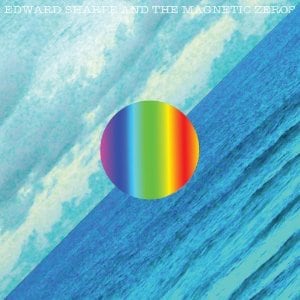 [xrr rating=3.75/5]In opening track “Man on Fire,” Alex Ebert (aka Edward Sharpe) spryly sings, “I want the whole damn world to come dance with me.” Depending on your perspective, you may interpret this lyric as: a) a creepy assertion of a tortured man’s twisted desires, b) a playful bit of ironic hipster posturing or (c) an exuberant expression of sincere joy and passion for this strange mystery called life. How you feel about this line will likely determine how you feel about all of Here, Edward Sharpe and the Magnetic Zeros’ second full-length record.

Those who defend Sharpe and company point to lead singer/songwriter Ebert’s magical, mysterious transformation from frontman for power-pop/punk band Ima Robot into the messianic Edward Sharpe, one who overcame the horrors of addiction and instantly fell in love with quirky fellow singer Jade Castrinos. The 11 piece Magnetic Zeros have reached an almost mythical status, as they travel around on a Ken Kesey-esque magic bus, performing their hippie music to a loyal, and increasingly large, audience. This merry band of travelers, invoking the California music communes of the late ‘60s such as Laurel Canyon, seems to have forgotten that the Summer of Love ever came to a close.

Of course, there are those who rain on the peace-and-love parade. Critics of Mr. Sharpe feel that his transformation from an ironic, geeky punkster into a heart-on-the-sleeve hippie prophet seems contrived. The runaway mainstream success of Ebert/Castrinos duet “Home” a couple of years ago as well as the appearance of several Magnetic Zeros songs in prominent TV commercials didn’t do a lot to help the band’s indie cred either.

Here doesn’t exactly take the band in a new direction. It’s unlikely to make listeners who already have an opinion about Edward Sharpe, whether positive or negative, change their minds. There are still a lot of over-the-top kaleidoscopic textures and expressions of naïve, childlike exuberance. The main difference between Here and 2009’s Up From Below is that the latest record has a definite gospel twinge, as evidenced in both the music and lyrics. The communal choir sound and tambourine on “That’s What’s Up” and soulful a cappela vocals that start “I Don’t Wanna Pray” match the lyrics that find a man reaching towards the stars, the latter beginning with the line, “I love my god, god made love.” On “Dear Believer,” Ebert sings, “Reaching for heaven is what I’m on earth to do.” All of this presumed spirituality is tempered with a heavy dose of skepticism, though. “I Don’t Wanna Pray” contains the line, “I don’t wanna pray to my maker/ I just wanna be what I see.”

Some of the tunes are also notable for scaling back a bit from the dense, multi-layered Edward Sharpey sound. “That’s What’s Up” and “I Don’t Wanna Pray” in particular employ a bit of a minimalist jug-band aesthetic, one that recalls either the playful British dancehall pastiches of The White Album or some silly novelty tunes from “The Muppet Show.” Given the Magnetic Zeros’ love affair with the ‘60s, several moments on Here feel a bit anachronistic, including deliberate Bob Marley rip-off “One Love To Another,” the ‘70s power balladry of “Fiya Wata” and the Phil Collins-style reverbed tom-toms of “All Wash Out.”

If you’re annoyed with a choir of hippies singing a line like, “I’ll be the church, you’ll be the steeple,” or a band that regularly features banjo, sleigh bells and whistling, avoid Here at all costs. If you don’t mind a little shameless nostalgia for a mythically magical time and some vague, feel-good mysticism, give Edward Sharpe and the Magnetic Zeros a chance. 2012 most likely won’t see another bona fide summer of love, and Ebert probably won’t get the whole damn world to dance with him. A man has a right to dream, though.