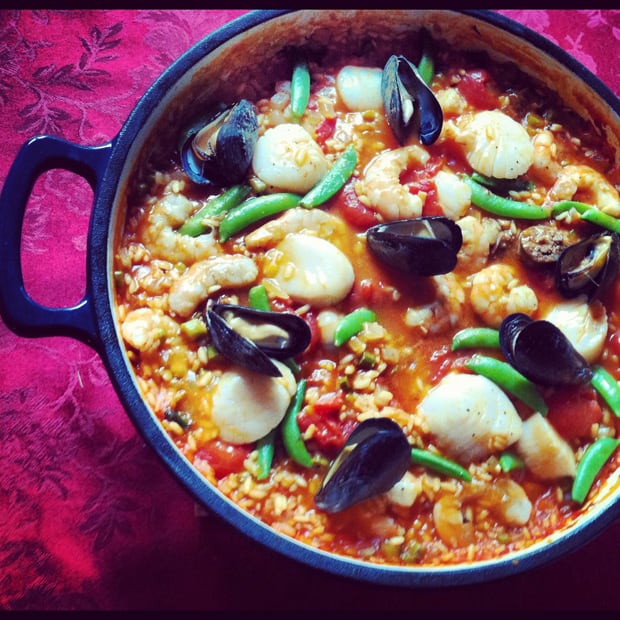 Paella is one of those dishes that seems intimidating at first glance. It’s got a fancy Spanish name, requires special ingredients and equipment and also comes with a lineage that can lead to cross purposes in the kitchen. Is it a seafood dish or a meat dish? And what’s with those snails that keep popping up in every third recipe?

It doesn’t have to be this way, so let’s demystify a few things right off the bat. It’s both a seafood dish and a meat dish although the two don’t have to be mutually exclusive. Try it with chicken and scallops, or rabbit and mussels, or shrimp and strips of fluke and maybe just snails and nothing else if you really have balls and want to be “authentic.” Another thought on that: you are not from eastern Spain and thus don’t need to be caught up in having to recreate a perfect Valencian replication if you want to enjoy paella. If you don’t have a 16 inch paella pan and you use a heavy duty skillet instead (enameled cast iron is my weapon of choice), no one is going to beat down your door and haul you away. Lack of allegedly proper equipment shouldn’t deter you as you’ll just be denying yourself the pleasure of one of the great one pot (errr, pan) dishes of the culinary universe if you get caught up in over-thinking things.

Here’s how that can be avoided. Go to your local fishmonger. Ask them if their shellfish is fresh. If it is, buy a small amount of each of whatever they have. If they have locally caught fish, buy a half pound of that too (stripped bass works very well.) If neither of those is fresh, find a new fishmonger. After that go to your local farm stand and buy whatever they have that you can use. Spring onions, favas, broccoli, green garlic, radishes… the possibilities are endless and all would work well. For our paella we got sugar snap peas and asparagus from Early Girl farms in East Moriches. Everything else for the dish should be in your pantry already. Good quality canned tomatoes (or fresh if you’re doing this a few months from now) Arborio rice, stock, wine, onions, saffron, pimenton… okay, pimenton (smoked paprika) might not be in your pantry but seek it out if it’s not as it comes in handy with a variety of ingredients.

That’s it. No over-thought, just locally sourced vegetables and seafood treated with care in what may be a wildly inappropriate skillet in some corners in the world. Still, take all of those ingredients, layer them in at the appropriate times and about 40 minutes later you’ll have paella on the other end. It might not be “authentic” or cooked in shiny paella pan but it will taste damn good. And that should be all that counts in the final analysis.

½ lb of chorizo or spicy sausage

1 32 ounce can of diced tomatoes with juice

Place a paella pan or large, oven proof skillet over medium heat and add the oil. Once it’s hot, brown the sausage on all sides, about five minutes. Remove the sausage (it won’t be cooked through at this point but that’s okay) and all but 1 tablespoon of its rendered fat from the skillet. Add the onion and cook for five minutes until translucent. Add the asparagus and cook for four minutes until it softens. Add the garlic and cook for 30 seconds until fragrant. Add the rice and stir to coat it in the ingredients. Let it toast for a minute or two and then add the white wine, stock, pimenton and saffron. Let the mixture come to a boil and then add the tomatoes. Once it comes to a boil turn the heat to medium low and let the rice cook for 15-20 minutes, stirring sporadically. After 15 minutes taste the rice for doneness. If it still has some “tooth” left, leave to it cook for another 5-8 minutes. Once the rice is cooked through, add the scallops and shrimp, turning them occasionally until they are done, about 5 -8 minutes. Add the snap peas as well. Slice the sausage into ¼ inch rounds and add them to the pan. Do not stir the rice at all from this point out (you want it to burn slightly on the bottom, trust me). If at any point you feel that the paella is becoming too dry, add water in 1/8 cup increments. Place a separate pan over medium heat and once it’s hot, add the mussels and small amount of water (a tablespoon or two) and let them steam open. Discard any that do not open. Add them to the paella, remove from the heat and serve immediately with good, crusty bread.