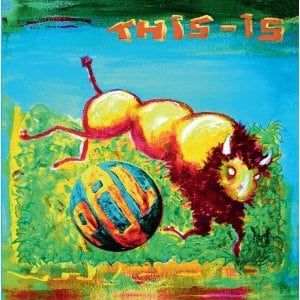 [xrr rating=2.0/5]Trying to critique John Lydon has always been a bit of a fool’s errand. From his legendary days with the Sex Pistols through his various musical experiments with Public Image Ltd to his stint as a reality show contestant and TV spokesman for butter, it’s never been entirely clear how much of his attitude has been sincere and how much is just there to piss people off. Even his earliest pronouncements of the death of rock ‘n roll and the collapse of society, so easy for conservatives and critics to take at face value, have a certain wry mockery to them, as though Lydon has always been saying, “This is what you want me to say.” This is all to say, his best work has always been heavily laced with ambiguity and almost impossible to judge on any merits but its own. Sadly, the comeback album for his post-punk project Public Image Ltd, This Is PiL, is not his best work, and all too easy to critique.

Public Image Ltd started as Lydon’s second life after the implosion of the Sex Pistols, both as a way to distance himself (as PiL’s savage, eponymous first single made clear) and to get some shots in at his former band. And that’s not to diminish the contributions of erstwhile Clash guitarist Keith Levene and original bassist Jah Wobble; the dub-influenced, thoroughly grimy musical template they set would characterize much of PiL’s output for years. But over time, as Levene and Wobble were ousted, PiL became a solo musical vehicle for Lydon, and by default, the two have become essentially interchangeable. And although the musicians recruited for This Is PiL aren’t quite hired guns (guitarist Lu Edmonds and drummer Bruce Smith have played with PiL on and off for years, while multi-instrumentalist Scott Firth is an industry lifer), Lydon has really no one to blame but himself for the lack of energy or purpose on This Is PiL.

For example, there are two ways to judge the opening track “This Is PiL.” One, it can be considered a stab at the idea of rock music, a repetitive, bass driven track that manages to make even a mandolin sound sinister for a moment. On the other hand, it could equally be considered completely bereft of ideas, in which Lydon shouts variations of the title phrase over a piece of music derivative of PiL’s earliest years. Either could be supported, but the fact that the song quickly becomes a boring slog to listen to is far more indicative of the latter. Similarly, “One Drop” and “Deeper Water” sound vigorous in the first few moments, with Lydon barking anger and spite, but lose momentum almost immediately. Even stand out track “The Room I Am In” is set to indifferent, muddy music, salvaged mostly by Lydon’s spoken word delivery of an impassioned diatribe against council flats and government housing.

And passion is what the majority of This Is PiL lacks. In no possible world would Lydon ever be accused of being a great singer (or even trying), but his raspy, whining vocals have aged poorly. Whereas he once sounded like a caustic youth, angry at everything, he now bellows like a man, coming across more as a middle aged bloke ranting in a pub. And that’s a good description of what This Is PiL sounds like: an aging man sounding off about the things that piss him off, but without the energy and spite he once had.