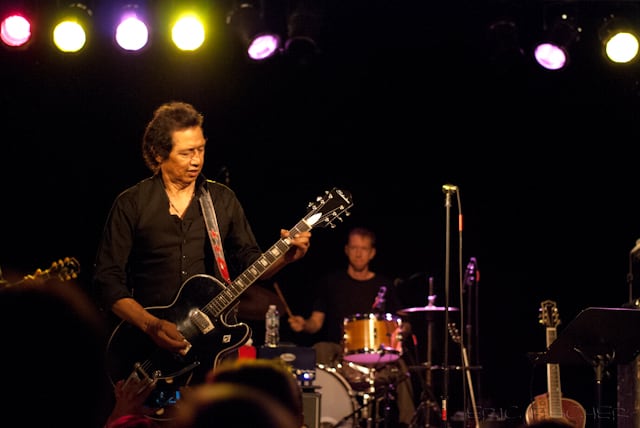 Prior to his most recent stop at Off Broadway, the last time Alejandro Escovedo played St. Louis was at the city’s inaugural LouFest in 2010. He was met with a respectful, if slightly ambivalent, audience – mostly green, indie-hipster types probably not too familiar with the musician’s extensive back catalog. For observant people watchers it provided an interesting case study: some listeners stuck around and gave the obligatory whoops and hollers that such festivals mandate, but the majority appeared preoccupied with claiming territory near the opposite stage – some folks did everything short of driving a stake into the ground – where “local” hero Jeff Tweedy was about to play.

A far different crowd turned out for Escovedo’s performance this time. Aside from the occasional college kids in backwards ball caps and the usual eccentrics dressed more colorfully than a string of Christmas lights, a much older audience showed up on this May night. Cowboy hats, Knights of Columbus shirts, gray beards and balding heads were prevalent, as was a genuine appreciation for Escovedo’s music. Each song was lustily greeted with loud applause and Escovedo’s frequent storytelling was listened to in earnest. Despite the venue’s temperature – which seemed to increase by the minute – that large turnout and knowledgeable audience made for an inviting, friendly atmosphere.

After a short opening set heavy on confessional emoting and tidy political messages aimed at the 99%, opening act and local guitar hero Jimmy Griffin stuck around to deftly play the instrument on nearly every Escovedo song; throughout the night the Austin native would be joined by various other St. Louis musicians, all of whom performed admirably and quite often exceptionally, as if they’d been playing these songs for years. The show opened with several acoustic songs that implied it would be a mellow, folky evening: wonderfully slow versions of “Rosalie” and “I Was Drunk” were made even more tender by Elizabeth Ramos’ violin work, before “Sensitive Boys” again featured Escovedo carefully drawing out his vocals and also incorporated saxophone into the mix. A cover of old standby “I Wish I Was Your Mother” was appropriately delicate and closed out this acoustic “mini set.”

And then the volume was cranked way up. A number of songs from Escovedo’s forthcoming Big Station received airings; songs like the Patterson Hood-worthy “Sally Was a Cop,” “Bottom of the World” and “San Antonio Rain” suggested this release could be a rock-oriented record heavily focused on social and economic issues. In between were a bunch of sweaty, hot songs for a sweaty, hot venue: Escovedo channeled his punk past as he shouted and snarled the lyrics to “This Bed is Getting Crowded,” “Tender Heart” and “Chelsea Hotel,” the last of which was prefaced by a telling story about the musician’s experiences at the famous/infamous hotel.

A lengthy four-song encore included covers of “All the Young Dudes,” “Beast of Burden”- which found Escovedo stalking the stage like a revivalist preacher or cult leader – and a solo take on obscure song “The Rebel Kind.” A heartfelt version of “Down in the Bowery” ended the night much the way it began – quiet, hushed and introspective – as if trying to cool down the heat and volume generated by most of the songs. For a musician with such longevity the concert was well representative: the acoustic section tugged at the heartstrings, while the electric songs went for the guts and machismo that define great rock music. By the end of Escovedo’s two-hour performance, it was again clear that he’s one of the few artists able to play both types of music and make all of it entirely convincing.