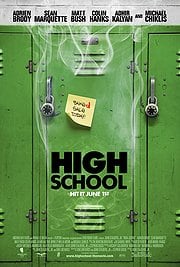 [xrr rating=2.0/5]High…school. It’s a stoner movie set in a high… wait for it…school. Get it? Many a bad comedy would be content to make that a throwaway joke, but in this case, that’s actually the title of the film. And it doesn’t stop there: the whole premise of High School is that, through a series of increasingly bizarre events, an entire school gets high. In a way, I have to respect writer/director John Stalberg (as well as co-writers Erik Linthorst and Stephen Susco) for their ballsiness. There’s no stoner cliché they leave behind, no dumb joke that they’re not willing to go for. Unfortunately, sheer reliance on pot jokes doesn’t make for much of a film.

High School is through and through a stoner film, but it also takes a few stabs at close relation the buddy comedy. The central relationship of the story, between classmates and former childhood best friends Henry Burke (Matt Bush) and Travis Breaux (Sean Marquette) (and if you think there’s not going to be labored bro/Breaux jokes, you’ve got the wrong movie), lifts pretty heavily from Superbad, with Breaux taking the stoner Jonah Hill role and Henry the overachieving Michael Cera bit. Henry is the high strung, imminent valedictorian of Morgan High School, with a scholarship to MIT on the line. Breaux smokes a lot of weed and makes dick jokes. After they awkwardly bond the day before finals, Breaux convinces Henry to smoke his first joint, only to find that their martinet of a dean has decided to drug test every single student in the school in the wake of a state spelling bee competition debacle that involves much talk of diarrhea and the wackiness of the name Phuc sounding like “fuck.” Seriously.

High School is weakest when it actually tries to stick to its plot, in which Henry and Breaux replace bake sale goods with super-saturated pot brownies in order to skew the test results (if everyone tests positive for THC, nobody can be expelled, goes the fuzzy logic). Its funniest moments invariably involve the supporting cast of faculty and stoners, which is almost ridiculously overqualified (and often underutilized). High School features Colin Hanks, Yeardley Smith, Curtis Armstrong, Michael Vartan and Andrew Wilson, few of them getting more than a few lines of dialogue. Even a pair of stoners named Dave (Big and Little Dave, played by Luis Chávez and Max Van Ville, respectively) are more entertaining in their few scenes than the ostensible protagonists, who seem barely sketched in at the beginning of the film and only receive bits of back story when the movie needs them to have a reason to stick together. But even the talented supporting cast must bow to the film’s antagonists.

Truly, High School belongs to the bad guys. As Dean Gordon, Michael Chiklis is almost unrecognizable, buried under a sandy wig and mustache combo, along with a strangely awkward, effeminate manner that comes across as fascinatingly pervy. He’s like Stephen Root’s Milton from Office Space, in particular his giant, insect-like glasses and curiously mild-mannered menace. But the most winning performance is by Oscar-winning actor Adrien Brody, playing an unhinged, gravelly voiced drug dealer/former child prodigy named Psycho Ed. His entire torso covered in tattoos, dressed in a vast, fur-trimmed coat (shirtless, naturally), and given to talking to his pet frog, Psycho Ed is far and away the most entertaining and inspired part of the film. He’s a distraction-prone, violent genius with Christian Bale’s Batman voice, and at times even comes across as genuinely scary, which is impressive considering how dumb of a comedy this is.

Stoner films don’t have to be all bad. Regardless of your feelings on the sticky green, there’s a lot of enjoyment to be derived from a Harold & Kumar Go to White Castle or Half Baked, even if most of the genre descends to easy jokes of the Cheech & Chong variety. Unfortunately, High School hits the clichés and stoner stereotypes of the latter more than the hazy brilliance of the former. But, in all fairness, when a primary recurring joke of the film involves stoned teenagers getting caught up on the word “Phuc,” you know what you’re getting into.