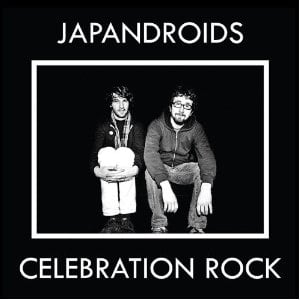 [xrr rating=4.25/5]After the release of their 2009 record, Post-Nothing, Vancouver noise/post-punk duo Japandroids reportedly came close to calling it quits on music. Just as their debut record was beginning to garner critical acclaim and their fan base was growing, Brian King and David Prowse were faced with tour exhaustion and the straining of their longtime friendship. Thus, the explosion of guitar fuzz and (literal) fireworks that kick off Celebration Rock is an appropriate re-introduction for a long awaited sophomore record. For the next 40 minutes, Japandroids blow through some of the most exciting, frantic and well-constructed guitar rock of the year.

While Post-Nothing reveled in shoegaze scuzz and moments of dissonant noise rock, Celebration Rock represents a gigantic leap forward for the band, as each song here is a finely crafted pop tune that just so happens to be hidden underneath a heap of distortion, pedal effects and drum solos. And while Japandroids certainly haven’t compromised their rowdier tendencies, there’s a certain polish here, a finely tuned attention to craft that makes this record not only more accessible upon a first spin, but also benefits its longevity. These are songs constructed with hooks at the forefront, ready to tunnel into your head and settle in for a lengthy stay. There’s the fiery three-chord explosion of opening track “The Nights of Wine and Roses,” which sees King asking, “Don’t we have anything to live for?,” a poignant moment of introspection made all the more relevant by the band’s near end three years ago. “Fire’s Highway” adopts all the monikers of a good road tune – a sing-a-long chorus about dreams and possibilities and the futility of them; rousing backing vocals and chugging rhythm – with tinges of Springsteen if the Boss was a possessed post-punk overlord.

Japandroids set about with the remarkable task of creating a record that’s all gas pedal and no brake. You won’t find any room to breathe here, but the bevy of hooks, handclaps and earworm-y melodies make for a record that never seems crowded despite the layers of guitars and feedback and the punishing kit work of Prowse. This is best exemplified by “The House that Heaven Built,” the rousing penultimate track that’s the culmination of everything Japandroids do right on Celebration Rock. There’s the lead guitar, drenched in distortion that barely allows for audible chord changes. Then there’s the group chanting, perfect for those nights spent driving aimlessly with those friends you only really connect with for one summer. It’s nostalgia and modernity all wrapped up in a glorious anthem of missed opportunities, booze and freedom.

It’s this lyrical shift in perspective, of embodying and embracing other people, places and moments that makes Celebration Rock more than just a set of fleeting fist-pumps and head bangs. Instead, we get a record that takes the tired themes of lust, freedom and companionship and makes them sound fresh and revelatory. There’s a certain chaos inherent in those themes, in their real life operations, but Japandroids also understand that there’s order to be found there somewhere. When they break into a hypnotic, jacked-up version of the Gun Club’s “For the Love of Ivy,” we know it won’t be long before the sonic chaos is once again resolved in a moment of catharsis, via a guitar solo, a bridge or a manic shout. Japandroids have a way of shooting off in every direction, both lyrically and musically, but Celebration Rock manages to tie it all together and make that chaos look appealing, ordered and manageable. Maybe it’s not the most rebellious of statements, to suggest that there’s ways of ordering existential angst, but it’s a statement that works to great effect here. Ultimately, Celebration Rock is a glorious record that presents a vision of an unknowable future but is determined to revel in the unexpected and the limitless.