January 27, 2021
Home Books Swallow: Foreign Bodies, Their Ingestion, Inspiration, and the Curious Doctor Who Extracted Them: by Mary Cappello 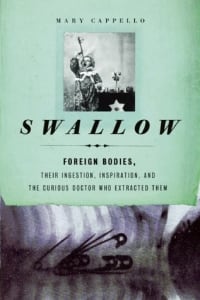 [xrr rating=1.25/5]I can distinctly remember two pieces of advice my grandfather gave me. “God looks out for the stupid people first,” he told me as we witnessed someone obliviously cross a downtown street and narrowly miss being splattered, which still sounds like an odd comment coming from a lifetime Catholic. The other one, equally profound, was that “people will put anything in their mouths, and you damn well better not be one of those imbeciles.” Nowhere is this second nugget of wisdom proven more true than in Mary Cappello’s mouthful-of-a-title-in-itself Swallow: Foreign Bodies, Their Ingestion, Inspiration, and the Curious Doctor Who Extracted Them, which seeks to understand both the biology and psychology behind the act – whether deliberate, accidental or forced – of swallowing objects that really shouldn’t drop down the old gullet, including everything from safety pins to coins and kids’ toys.

The central figure in Cappello’s book is Chevalier Jackson, an endlessly fascinating doctor who advanced endoscopy to such a degree that he’s often cited, however somewhat inaccurately, as the inventor of the science. Born the year the Civil War ended and dying in 1958, Jackson dedicated his life to developing sophisticated methods for removing foreign objects from the esophagus; in his long life he also successfully lobbied for placing warning labels on poisonous materials, published an even dozen medical textbooks and served as a professor at various universities. Cappello does a moderately serviceable job in capturing Jackson’s unwavering sense of morality and his numerous personality quirks, most notably his habit of keeping and cataloging the items he extracted (now housed in Philadelphia’s freak show Mütter Museum) and his highly regimented, extremely Spartan eating habits and overly cautious pleas to the public to “chew your milk.” The good doctor emerges as a mixture of genius and eccentricity, a genuinely compassionate man whose pioneering medical work remains of importance today.

Cappello writes in what can charitably be called a “poetic” style, taking a certain aspect of Jackson’s bio and using it as a jumping off point for examining aspects of life and health in general. It can also be described as tedious, cumbersome, length-padding, pseudo-philosophical bullshit. The phrase “economy of language” has no business here, as Cappello repeatedly goes off on metaphysical tangents that meander and wind, but very rarely end up somewhere concrete. So how to know if a reader will find Cappello’s writing lyrical or pretentious? Allow me one mercifully short example, in this case a description of how Jackson would use a local anesthetic that included a wee bit of cocaine (just like mama used to make!):

Asleep or not asleep, asleep and awake: what is that place where we reside psychically when our body is being invaded in the name of cure? What is its time? Insouciant twilight during which part of you leaves while another part stays in the room?(44)

If you found that interesting, knock yourself out, because there’s a lot of it in this book. I suspect though that plenty of readers will find it self-indulgent, distracting and, like the illicit objects that Chevalier Jackson extracted, not worth trying to swallow in the first place. Tucked into Swallow is a marginal study of an overlooked medical pioneer whose legacy deserved much better. It’s too bad the reader has to wade through piles of quasi-intellectual garbage to find even that.