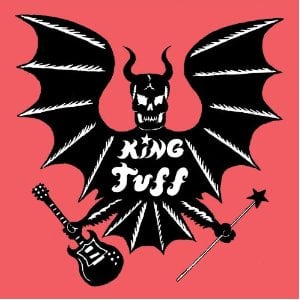 [xrr rating=4.0/5]Most critics and audiences in 2012 have come to understand that rock ‘n’ roll’s rebellious leanings are now foggy images in history’s rearview mirror. Even in 1976, critics were pointing to the stagnation of rock music; as Lester Bangs said, “It’s no lament to say that the future lies behind us.” Rock music, especially what is now considered classic rock, is always turning in on itself, drawing on influences from an established canon and only occasionally broadening its perspective. We all know a few rockists who are nostalgic for the days when the music “really meant something, man.” While such notions of authenticity and realness have faded over the years, an album such as King Tuff suggests that nostalgia-fueled classic rock still has a lot to offer, if you’re open to the charms of a little tongue-in-cheek bravado.

On his debut for Sub Pop, and his second record as King Tuff, Kyle Thomas exhumes a varied history of rock’s canon and coats it with a contemporary post-punk sheen. Throughout King Tuff he embodies Marc Bolan, David Bowie, Superchunk and a host of others with the goal of reinvigorating complacent, well-worn tropes that middle-aged classic rock FM radio has all but beaten to death. Instead of engaging in pointless rehashing or rosy wistfulness, King Tuff is a playful nod to the traditions of rock and roll, respectful at one turn and ready to dismantle its mythos at the next. The chugging bass and bright acoustic guitar of “Keep On Movin’ On” calls back to Electric Warrior, an infusion of hand-claps and subdued backing vocals providing one of the album’s catchiest cuts. Much of the record revels in this mid-tempo blend of folk, glam and punk, providing some well-placed breathing room between the real stompers. Those stompers, be it the electric guitars in “Anthem” that swing with unobstructed fury while the militaristic kit work provides the marching backbeat, or the spacey lead lines of “Alone & Stoned,” move the record along with an ever-quickening pace; there’s significant, calculated momentum here that’s infectious. These early album cuts are where Thomas shows his debt to glam rock, constructing perfectly earworm-y pop hooks behind a wall of distortion.

Thomas doesn’t allow himself to be pigeonholed by his glam influences though and King Tuff benefits from his frantic genre hopping. On “Stranger” he filters Dale Hawkins-era swamp rock through post-punk ideology, the electric guitars suggesting noise-rock fury but the kick-drum and swinging rhythm continually beckoning hips to sway. “Baby Just Break” sees Thomas bordering on farce, his Dylan-esque drawl telling us to “just break the rules.” Though it sounds like a punk rocker’s call to arms, its placement within a Southern fried sonic context points to the cliché-ness of such dated ideals. Thomas recognizes that the revolutionary proclamations of rock and roll have long been dead, as the genre (post-Elvis) became the dominant musical culture. Thus, “Baby, just break the rules” is established as a charming, lighthearted look at rock’s perceived rebellious aesthetic. This subversion is never clearer than on album standout “Bad Thing.” One of the most memorable singles of 2012 thus far, it sees Thomas in pure existential songwriter mode, looking in the mirror every day and understanding that, maybe, he’s not the good person he thinks he is. “I’m a bad thing,” he laments over and over again; and while the overdriven guitars suggest punk rock carelessness – a moment of braggadocio – it merely serves to disguise the vulnerability beneath.

It’s this balance of sloppiness and care, of not giving a fuck and giving too much of a fuck, that’s the heart of this record. Thomas knows that rock-as-counter-culture is no longer an understood truth; that even though the classic rock canon still exists, those who employ it as stringent fact are increasingly seen as stubborn, out-of-touch dinosaurs holding on to a golden age of authenticity and meaningfulness that never actually existed – rock has long been the dominant culture, not in opposition to it. King Tuff is the exploration of those dated ideals – of authenticity, of star power, of the inherent truth found in a distorted three-chord melody. King Tuff isn’t hackneyed though, nor does it lament rock’s long-fading power. Instead, it chooses to playfully engage with the past and attempt to reconcile its much-maligned exclusivity – which was always disguised as inclusivity – with contemporary connectivity and fragmentation. It’s a wonderful record that takes pride in its heavy application of hooks and harmonies. It unabashedly suggests that while rock and roll may not be the source of an inherent truth, it still has the potential to act as an aid on the road to personal and musical redemption. With his second record, King Tuff takes the ghosts of rock’s past and beckons them back to life.