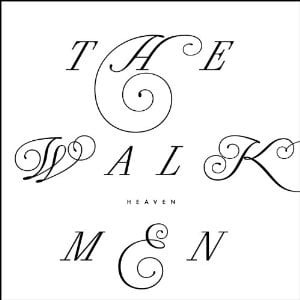 [xrr rating=4.5/5]The sounds of settling are sometimes monotonous and uninventive. Who wants to hear an aging indie rocker sing about putting the kids to bed or having a barbecue with the neighbors down the block? Indeed, rock ‘n’ roll has long been the domain of the young and the restless, those who grab life by the horns and dance recklessly through perpetual adolescence. What’s a young man to do, then, when he outgrows the Never Never Land of rock stardom and does conventionally “adult” things like get married and have kids and buy a house?

Fortunately, in the case of Walkmen frontman Hamilton Leithauser, you keep growing artistically, keep questioning everything and make the most mature, emotionally satisfying record of your career. Heaven, the New York City-based group’s seventh studio effort, transcends the negative stereotypes associated with the label “dad rock” even as it acutely examines what it means to be a parent, to be in a long-term relationship and to search for a sense of stability in one’s life. Despite its sunny name, the record depicts a stage of life fraught with as much ambiguity as domestic tranquility.

To be sure, Heaven gives off its fair share of relentlessly positive vibes. The album begins with the optimistically named “We Can’t Be Beat,” quite a contrast to infamously self-doubting titles of past Walkmen songs like “We’ve Been Had,” “Everybody Who Pretended To Like Me Is Gone” or “Woe Is Me.” Indeed, the tune’s central lyric, “We’ll never leave/ We can’t be beat/ The world is ours,” is a victorious cry from a band who just celebrated its 10th anniversary. The anthemic title track is written from the perspective of one best friend to another, reminding him to “Remember, remember/ All we fight for.” A pleasant sentiment, indeed.

On the other hand, The Walkmen depict domestic love as not comfortable, but full of uncertainties. The line “Give me a life that needs correction/ Nobody loves love’s perfection” pretty much sums it up. On “The Witch,” the record’s grittiest track, the speaker ruminates on the complicated status of his relationship, describing “driving through central Michigan/ Listening to the country station and wondering where I stand.” The sublimely beautiful “Southern Heart” finds a man haunted by the past asking his partner to “Tell me again how you love all the men you were after.”

“Line by Line” sounds like a parent giving his child answers to difficult questions (“Now I know how the story goes/ The wicked all will die/ How do you know it?/ I just know it”). This hyperbolic certainty stands in ironic contrast to the dark, minor-key, uncomfortably minimalistic texture. It’s not a positive anthem of faith but rather an admittance of tentative acceptance. Even “Song for Leigh,” a track purportedly written as a kind of lullaby for Leithauser’s daughter, has a dark undercurrent. He dishes out simplistic fatherly advice, such as, “Patience will keep you alive.” Just when you think that Leithauser has given us a sentimental parenting tune in the vein of Paul Simon’s “Father and Daughter” or Ben Folds’ “Gracie,” we get the main lyric, “I sing myself sick about you,” illustrating not just the pleasures of parenthood, but the relentless anxiety it can cause.

The emotional complexity of the record’s lyrics is reinforced by its multifaceted sonic concept. Producer Phil Ek ensures that Leithauser’s voice soars above the mix when it needs to, though it never quite reaches the heightened melodrama of “The Rat” or “Angela Surf City.” Guitarist Paul Maroon retains his pencil-thin texture, although “Song for Leigh” has a Byrds-inflected jangly guitar at its base. “Heartbreaker” has a deliberately vintage sound, referencing the vocal style of Roy Orbison and the production values of The Ronettes. On “No One Ever Sleeps,” the group’s “circus music” tendencies come on a bit too strong, with the overall vibe resembling a lopsided carousel waltz.

The Walkmen succeed where many have failed in the past. They have created a record about happiness that doesn’t simply wallow unequivocally in the securities of adult life. They depict heaven not as a place at which they have arrived but as an ideal they are imperfectly pursuing. Miraculously, they have retained the passion of that group that shouted, on their breakthrough single almost 10 years ago, “Can’t you hear me pounding on your door?” Let’s just hope that they keep knocking for at least another 10 years.