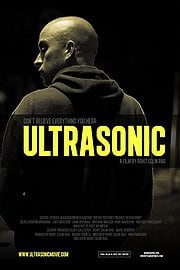 [xrr rating=1.75/5]Sometimes it’s particularly sad to consider the distance between ambition and execution in independent film. Rohit Colin Rao and his collaborators on Ultrasonic obviously approach their material with an admirable earnestness, putting all the proper pieces in place to make their story of mounting modern pressures work. The characters and their conflicts are laid out precisely, the themes presented with a studied casualness and the storytelling structure is built in accordance with tried and true techniques. And yet the final result is an unpleasant slog, overwhelmed by an uncomfortable staidness of thought and delivery.

The main character is Simon York (Silas Gordon Brigham), a rock musician and piano teacher living in Washington, D.C. with his pregnant wife, Ruth (Cate Buscher). He’s losing pupils at the same time that he and his band are preparing to make a pricey trip into the studio, which is implied to be Simon’s last real chance to make a living at the art he loves. Amidst these strains, Simon starts hearing noises that no one else seems to register. It’s a low, constant rumble that shifts tones from time to time. Ruth assumes it’s just a natural result of all his years playing loud music on stage, but there’s a more menacing theory put forth by her conspiracy-minded brother, Jonas (Sam Repshas, his head adorned in full Galifianakisian scruff to emphasize a hobo madman vibe). He consults with some of his fellow researchers of shadowy government control efforts and determines that Simon is picking up on “psychotropic acoustics,” which the rest of society can’t audibly discern even as the sounds keep them compliant.

The film is shot in crisp black-and-white, but the images are so blandly composed and individual scenes are problematically over-lit, pummeling out any added sense of mood that may have come from the choice. It winds up coming across as an empty affectation, a quality that’s only emphasized when Rao introduced a conspicuous dab of color with some earplugs that Simon takes to wearing. As Simon careens down a road of mounting mania, the film unmistakably calls to mind Darren Aronofsky’s Pi, albeit a version of that film made without the same skill, conviction or gonzo panache.

The bulk of the performances are stiff to the point of amateurish, a devastating flaw that eliminates any tension that might otherwise be generated. Brigham shows little sign of increasingly desperation in the central role, and everyone who moves around him does so with a chilliness that represents thespian disconnection far more than worry. Rao takes on a multitude of key roles in the making of the film (besides directing and co-writing it, he’s also one of the producers, the editor, the cinematographer and wrote the music), but apparently has no eye for what is or isn’t working in a scene. Ultrasonic is a seed of a decent film. Rao simply doesn’t know how to make it grow into something worth looking at.