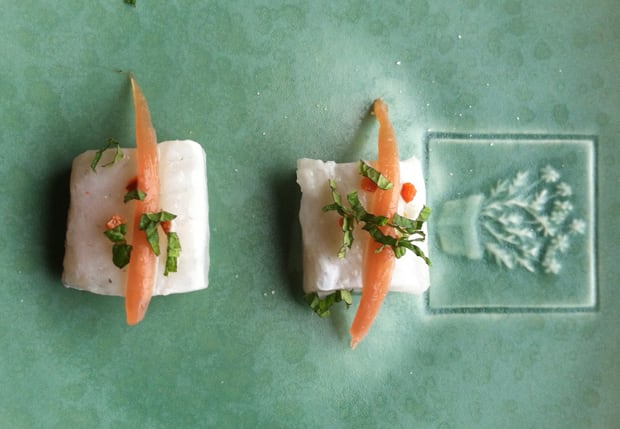 They are the rites of late spring around these parts: tall and deeply red stalks of rhubarb framing the offerings at farmers markets across eastern Long Island at the same time that fluke begins to come out of it surrounding waters. Sometimes, it’s good to be a lawnguylander.

Fluke is an immensely versatile fish that lends itself well to virtually all manner of preparations. Fried, pan roasted, steamed or raw techniques will all work. The latter is my favorite way to serve fluke. Sliced thin with a sharp (very sharp) knife and fussed with minimal seasonings, it’s the ultimate fish to serve raw because its texture is yielding in a way that even the most avowed texture-phobes don’t mind, and its flavor is mild in a way that makes you forget about its oily neighbors in the sea. Just make sure when you are picking it out in the fish market to smell before you buy. If it smells like nothing, you’re good to go.

As for the rhubarb, let me be the 4,073rd food writer to say, “Hey, rhubarb, it’s not just for pies, you know.” At some point maybe we’ll move past that, but in the meantime it still seems like using it for anything other than a pie is widely considered out of the box thinking. It shouldn’t be. Pickled rhubarb has been around for some time and certainly didn’t originate in the so-called “farm-to-table” restaurants that seem to pickle every stone fruit and vegetable across the spectrum these days. What once was old kitchen wisdom is now a trend. That’s ok, though, pickling is very easy to do at home and shouldn’t be the sole provenance of bearded hipsters and grandmothers who live in the country. I can’t recommend enough that you consider pickling everything you can get your hands on at home as it extends the life of the food you buy and adds an extra dimension to the dishes you prepare. Onions, shallots, plums, peaches, carrots, beets and peppers are all excellent in pickled form.

The logic of combining pickled rhubarb with raw fluke has as much to do with the time they become available as any flavor combination considerations. That being said, it works surprisingly well (yes, I’m patting myself on the back). When assembling the crudo, remember the fish is the focal point, so have a light hand when applying the seasonings. A little pickled rhubarb for acidic sweetness, even less jalapeno for some background heat and some lime for the brightness it imparts. That’s the basic template I’ve followed for many different crudo and ceviche combinations over the years: some acid, a little heat and something to sweeten and brighten the fish. Feel free to steal this and pat yourself on the back some day soon.

Fill a large stockpot ¾ full with water and put over high heat. Put the vinegar, water and sugar into a saucepan over high heat and let it come to a boil. After the sugar has dissolved, shut off the heat. While waiting for the pickling liquid to come to a boil, cut the rhubarb into pieces that will fit to just below the top of whatever particular canning jar you have. Pack each jar (this recipe should fill two pint sized canning jars) with the rhubarb and divide the spices between each jar. Fill each jar with the pickling liquid up to a half-inch from the top. Before you seal them, make sure there are no air bubbles in the jar by gently tapping each side. Place each jar into the large stockpot once the water is at a boil. Let the cans process for 10 minutes before removing them. Once they have completely cooled, you can place them in the pantry where they will last for one year unopened. Once opened, refrigerate for up to two weeks.

(This can be used as a pickling liquid for all manner of vegetables and fruits. For vegetables reduce the amount of sugar from one cup to ¼ cup.)

With a sharp knife, cut the fluke into ½ inch by ½ inch cubes. Use the excess trimmings and make a ceviche for yourself as a treat. Top each section with ¼ tablespoon of the lime juice. Cover with plastic wrap and refrigerate for 10 minutes or up to one hour. When ready to serve, top each piece with one strip of the pickled rhubarb, 1/8 of a tablespoon of the diced jalapeno and a pinch of the chopped mint. For final seasoning, add a tiny pinch of sea salt to each piece as well as a drizzle of good quality extra virgin olive oil and serve immediately.

Serves 6-8 people as an appetizer.