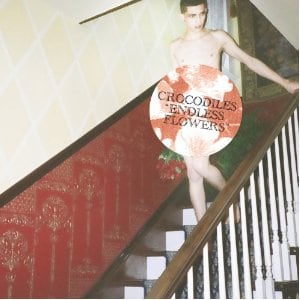 [xrr rating=2.75/5]San Diego acid-pop duo Crocodiles rounded up a keyboardist (Robin Eisenberg), bass player (Marco Gonzalez) and drummer (Anna Schulte) and headed to Berlin to record third LP Endless Flowers. Having eked out respectable releases between the two of them on the backs of serrated psychedelia such as “I Wanna Kill” and “All My Hate and My Hexes Are for You,” multi-instrumentalist/vocalist Brandon Welchez and guitarist Charles Rowell opted for a less murky, more overt approach this time. The result, a relatively clean, straightforwardly hook-heavy endeavor, also sounds fuller and of a deeper focus than the grainy scatterbrained scuzz of debut Summer of Hate or 2010’s Sleep Forever.

Diving into dark ruts and rushing full throttle down them (“Dark Alleys”), swinging around revolving-door melodies accompanied by “words so sticky-sweet” (“Bubblegum Trash”) or ringing out in drugged cacophony (the “Oh, annihilate me” of “Welcome Trouble”), Endless Flowers’ inner pistils can be even more rewarding than the influence-laden hooks and posturing at the forefront of each track. Setting aside minor blemishes such as the repetitious “Electric Death Song,” the record is invitingly intriguing.

For all that silver lining, though, it’d be more encouraging were the contents stronger. Draped over plain chord progressions and Welchez’s moody reverb with standard “psychedelic” guitar downshifts regularly adorning them, most of Endless Flowers’ tracks sprout in predictable directions. Several entries resemble retread Black Rebel Motorcycle Club material or Cave Singers one-offs. Moreover, the recurrent “flower” motif of the record, an attempt to ground it thematically and lyrically, comes across as lazy metaphor by virtue of gross repetition. Correlatively, rote verses plague Endless Flowers and the song titles themselves even verge on generic.

The record’s lead-offs are somewhat exceptions; single “Sunday (Psychic Conversation #9)” smashes in with a crunchy, miniaturized Kevin Shields riff afloat in a sea of pulpit keys, and the title track and album opener’s chamber jangle, tambourine and elevated synth phrasing frame a kaleidoscopic chorus. Even the backing harmonies, cowbell and heavy honky-tonk riff of “My Surfing Lucifer,” despite the track’s somewhat unfortunate title and chorus, heaves toward greater force than the rest of Endless Flowers manages. (Asinine lyrics like, “I felt so bored/ I felt so bored” detract, however.)

Placed within the context of other Crocodiles output, though, Endless Flowers feels more the initial, clumsy foray into a matured sound than any slump. In replacing some of their scuzzier, black-tar-and-napalm Black Angels grit with an increasingly less opaque sheen, Crocodiles have benefited tangibly. In other ways, the lurch toward higher production value has been a handicap, rubbing off an attractive tarnish, wiping away “the sickness and decay” natural to their sonic choices. One gets the sense on the record that Crocodiles are attempting the respectable BRMC HOWL turn and treading the pouty-mouthed Dandy Warhols turf at the same time. Not exactly “beautiful but senseless,” Endless Flowers is a pretty albeit less useful entry for those acquainting themselves with Crocodiles.