Broadly speaking, there are two different categories of remake: those developed by a studio as a means to avoid taking risks on unproven material, and those driven by an individual filmmaker’s vision of how best to alter or update stories worthy of resuscitation. The former category doesn’t necessarily produce bad films; see the 2010 remake of The Crazies, a major improvement on George Romero’s creaky, plodding original. And the auteur approach can certainly lead to disaster, as anyone who sat through Gus Van Sant’s ill-advised Psycho can confirm. Martin Scorsese’s Cape Fear, however, is a prime example of a successful director-driven remake, honoring what made the original film interesting while expanding and enriching it according to the instincts of one of the world’s greatest filmmakers. 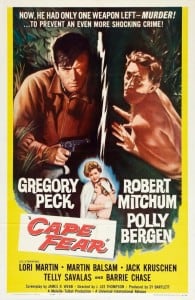 The original Cape Fear is noteworthy for two reasons: Robert Mitchum’s iconic performance as terrifying psychopath Max Cady, and the shocking lack of censorship regarding the true nature of Cady’s crimes. In 1962 the walls of the Hays Office, which had presided over movie censorship since the ‘30s, were only beginning to crumble. Cape Fear marked a watershed moment for Hollywood; a few years earlier, it would have been impossible for a movie about a serial rapist and pedophile to exist without serious soft-pedaling, but this film is strikingly honest about Max Cady’s most despicable quality: he is a sexual predator of underage girls. In the movie (based on a novel by John D. MacDonald), Gregory Peck plays lawyer Sam Bowden, whose family is terrorized by an ex-con (Mitchum as Cady) against whom Bowden had testified in a rape trial. As the tension ratchets, it becomes clear that Cady’s intended victim is not really Bowden, but his 14-year-old daughter Nancy (Lori Martin). Thus the film’s primary point of suspense is the question of whether or not a man will sexually assault a 14-year-old. In one scene, Cady lewdly gawks at a swimsuit-clad Nancy at the pool, and remarks to Bowden that his daughter is “almost as juicy as your wife.” Can you believe this movie came out in 1962?

Mitchum’s performance is just as creepy, in an impressively different manner, as his other famed psycho stalker in The Night of the Hunter. Reframing his trademark affect of laconic, macho insouciance—tilting it a few degrees—Mitchum reveals the latent threat that was there all along. It’s an unmannered, unselfconscious performance of subtle and natural terror. To the extent that Cape Fear is remembered as a classic, Mitchum is primarily responsible for its endurance.

Despite the Psycho-esque strings of Bernard Herrmann’s anxious score, no one could have mistaken J. Lee Thompson’s workmanlike direction for the ambitious art of Alfred Hitchcock. Still, Thompson—aided greatly by cinematographer Sam Leavitt’s high-contrast black-and-white shadowplay—pulls off a neat suspense sequence or two, such as a scene in which wife Peggy (Polly Bergen), suspecting Cady has entered her home, moves through the darkness toward what seems to be the stalker’s distinctive hat—but turns out to be an ordinary hat merely hanging on a hook. After establishing the depths of Cady’s psychopathy, Thompson gets a lot of mileage out of the simple suggestion that he might be lurking somewhere, ready to attack at any moment. As a movie, Cape Fear is more efficient than great, but its depiction of perversity was astonishingly ahead of its time. It’s even possible to draw a straight line from Cape Fear to Sam Peckinpah’s brutal Straw Dogs. Peckinpah basically took the same scenario, deemphasized suspense, and instead focused on troubling questions (latent in Cape Fear’s text) about the relationship between masculinity and violence. And both films have now had their legacies altered by modern remakes, for better or worse. 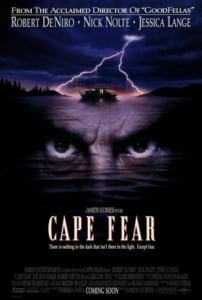 After the biggest triumph of his career to that point in Goodfellas, Martin Scorsese presumably could have made any film he pleased. That he chose this pivotal moment to enter a relatively disreputable genre—a horror-thriller with origins in ‘50s pulp fiction—affirms his dedication to cinema in all its diverse forms. Working from a screenplay by Wesley Strick, Scorsese fleshes out the character relationships of the original film and allows the story more room to breathe and grow. In the 1962 version, protagonist Sam Bowden was underwritten, Peck’s performance stiff and disinterested. Here, Nick Nolte plays him as a bundle of nerves and insecurities, a frustrated victim not only of Max Cady but also of a societal system powerless to protect him. Robert De Niro’s interpretation of Cady is less subtle than Mitchum’s, particularly in the unhinged climax. It’s not one of De Niro’s most convincing performances, but it forms a fascinating funhouse mirror image of his previous trio of unstable Scorsese protagonists: Taxi Driver’s Travis Bickle, Raging Bull’s Jake LaMotta, and The King of Comedy’s Rupert Pupkin. Together, these four characters form a disturbing portrait of wounded, errant Boomer manhood.

More so than most remakes, Cape Fear ‘91 is in dialogue with its predecessor. Scorsese’s curious decision to recycle the original Bernard Herrmann score pays off handsomely, enhancing the heightened atmosphere and sensually linking the film not only to the 1962 version but to a bygone tradition of thrillers represented by Herrmann’s insistent, stabbing notes. The cameos from Mitchum, Peck, and Martin Balsam (whose casting as a cop in the original film itself seemed a nod to his appearance in Psycho) are little more than winks, but there’s something enjoyably perverse about seeing paragon of virtue Gregory Peck play a sleazy lawyer who helps Cady turn the tables on Bowden. The film is also in dialogue, I believe, with the films of Scorsese’s contemporary Brian De Palma. The stylized widescreen framing—this was Scorsese’s first film in the extra-wide aspect ratio—seems influenced by De Palma’s favored lensing style, and the disregard for realism feels like a liberty taken in response to De Palma’s career-long experiment in artifice. Admittedly, Scorsese would follow through on this heightened horror mode more fully and brilliantly in his (still largely unrecognized) masterpiece Shutter Island, but Cape Fear presents a thrilling opportunity to see a master filmmaker boldly bending and widening his style—and capitalizing on the not-quite-realized potential of an existing film property. In other words, it’s a remake done right.