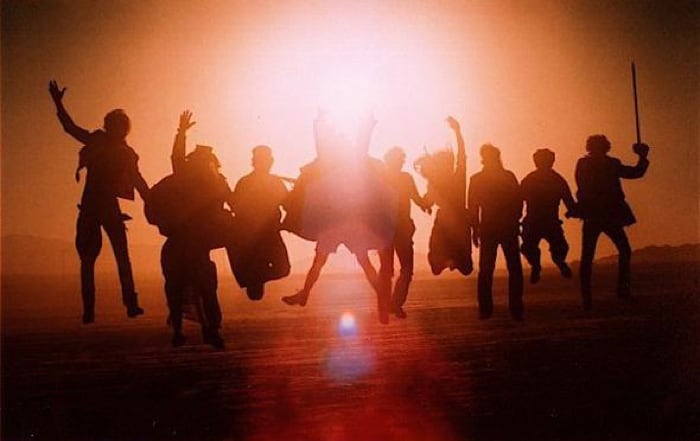 It was apropos that the pre-concert music for Edward Sharpe and the Magnetic Zeros’ big show at Chicago’s Riviera Theatre was The White Album. It goes without saying that Alex Ebert (aka Edward Sharpe) and company are trying to channel the feeling of the ‘60s, and, at their best, the playful spirit of tunes like “Martha, My Dear” or “Honey Pie” creep into their brand of psychedelic, goofy pop. The conventional wisdom is that the Magnetic Zeros must be experienced live in order to truly “get” what they are all about. So, I entered the Riv with a positive attitude and an open heart, ready to be transported on a magical, mystery journey or some such thing.

To be blunt, the sound at the Riv Theatre sucked. The Zeros consist of 13 musicians playing a plethora of instruments, from guitars to keyboards to exotic percussion and orchestral strings of every stripe. None of the complexity or distinctive sound of the instruments came through at the Riv. Rather, all I heard was a loud, obnoxious mush that only marginally matched the sonic concept of the Zeros’ studio recordings.

The disappointing sound didn’t deter the sold-out crowd from having a good time, though. They sang along, danced along and, at times, toked along as the group performed a mixture of tunes from their equally beloved and loathed first LP Up From Below and their latest release Here. While the audience was patiently participatory during such new tunes as “Fiya Wata” and “Child,” it was clear that their hearts were with the old standbys. Early in the show, when the band launched into “40 Day Dream,” Up From Below’s opener, the crowd jumped, swayed and sang their lungs out with an almost cult-like fanatical devotion. Although the subpar sound quality put me in a rather foul mood, I couldn’t help but get caught up in the peace ‘n’ love energy and sing along with the lyric, “It’s the magical mystery kind/ Oh, now, I could die.”

Alex Ebert has a rather eccentric stage presence. He sometimes stares seriously into the distance, as if receiving some divine prophecy and dances around stage wildly as if in a trance. On “Carries On,” the frontman started randomly talking to people in the audience. His relentless dedication to his quirky tunes is beyond question. He introduced “If You Wanna” by saying, “It’s not on any album, but it’s kinda a fuckin’ great song, actually.”

Not surprisingly, the concert highlight was probably “Home,” the culturally ubiquitous, love-it-or-hate-it duet that launched the fledgling group into the mainstream spotlight. Ebert and Jade Castrinos hammed it up, channeling a June Carter -and-Johnny Cash feeling throughout. During the spoken-word conclusion, they improvised witty, intimate dialog back and forth. The crowd chanted along with every word of the song as if their lives depended on it. Since the Riv had a strict curfew that night, the band performed no encores, but rather ended the show with “Home” and “Om Nashi Me,” the overly long track from Up From Below that descended into a trippy, sprawling instrumental.

If I seem to express indecisive feelings about this show, it’s because my reaction was mixed. The bad sound annoyed the hell out of me. The muddiness prevented me from connecting with the pure, peaceful intention of the music the way I wanted to. But, it’s difficult to be a part of such a dedicated, energetic crowd without at least picking up some good vibes. An Edward Sharpe and the Magnetic Zeros show might be the kind of event you only need to experience once in a lifetime. Nevertheless, I’m glad I was there.