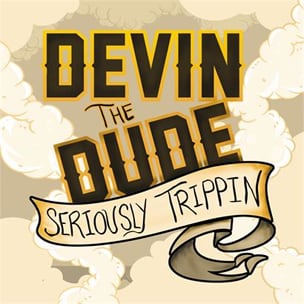 [xrr rating=3.5/5]Along with having a name that perfectly sums up his personality, Houston favorite Devin the Dude has spent his career carving a unique niche in hip-hop in which only he resides. Originally part of Rap-A-Lot trio the Odd Squad, whose only album, 1994’s Fadanuf Fa Erybody!!, is considered by southern rap icon Scarface to be the label’s finest release, Devin amassed a solo legacy in the late ‘90s for some of the genre’s most beloved guest appearances. His smooth croon added as much of a eerie foreboding to Scarface’s “Hand of the Dead Body” as it made playful fun out of De La Soul’s “Baby Phat,” and he even provided one of the signature moments of Dr. Dre’s landmark 2001. Proving he could have the same success on his own, Devin released four solos on Rap-A-Lot, including his sophomore release, Just Tryin’ To Live, which wound up topping several best rap album of the decade lists at the end of the 2000s. While he split from Rap-A-Lot in 2008 and had seemed to lose his signature sound, Devin returns to the fold with his Seriously Trippin’ EP, a release that I’m pleased to say is exactly what you want to hear from Devin in 2012.

There’s something about Devin the Dude’s music that’s just meant for summer, and Seriously Trippin’ is no exception. Opening with “You’ll Be Satisfied,” the production’s cool lushness accented by dipping strings make the ideal backdrop for Devin to switch from his straightforward rapping to his gentle crooning on the hook. Not only is there a perfect balance of both, but Devin’s laidback everyman writing approach is complemented by the rejuvenation of the charisma that made him such a fun artist to follow. It’s open windows on a Friday afternoon rap music, and nobody does it better than Devin.

The best parts of the Seriously Trippin EP (and the release is mostly best parts) sound right at home with Devin’s most loved work. He touches on his usual subjects, like day-to-day life, asking a woman out and wistfully missing a former love, but is still strong enough of a writer to give a captivating fresh narrative with his perspective. Many tend to write off Devin’s music as just “rap for stoners.” While Devin himself may have invited such pigeonholing (he did name a recent album Suite 4:20) and makes no secret of enjoying the plant, his music isn’t just weed-centric rap made for weed smokers. Devin’s interest in marijuana is just an extension of who he is and is more of a personal touch than an end game. The smooth vibes of his discography do have a stoner-friendly sound, but music this genuine is something even the straightest of straight-edge rap fans can get down with.

Perhaps Devin’s most impressive skill is his sense of humor. When looking at the pantheon of hip-hop recordings, outside of simple one-joke punchlines or lifelong clowns like Biz Markie, there’s not a lot of precedent for rappers themselves being funny. The fact that Devin can inject a subtle humor into a pro-fitness song like “Exercise” just adds to his irresistible coolness. Maybe it’s because Devin knows how to address a fairly universally-relatable topic in a pleasant sounding song first, and then accent it with a few jokes here and there in a feat of absolute mastery.

That said, the EP’s only two missteps occur in the moments where this subtlety isn’t present. “Stay Hard” in an unfunny, unrelated, overly long skit without music that brings the entire EP to a screeching halt. The closer, “420 Highway,” also feels out of place and, while Devin’s verse about plotting how to get a handful of weed while broke is great, the guest appearances and beat don’t fit the EP at all. Still, these two hiccups don’t take much away from how absolutely wonderful it is to have the old Devin back. If you have even the slightest interest in hearing rap music this summer, Seriously Trippin’ is a must-listen.