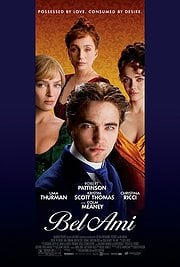 [xrr rating=2.0/5]Based on an 1885 novel by Guy de Maupassant, the 2012 film version Bel Ami aspires to two things: skewering male social climbing and showing some hot, sweaty Robert Pattinson sex scenes. While I have to admit that the subject matter lends itself well to both aims, it’s far less certain how well it pulls off either. But no one can claim that directors Declan Donnellan and Nick Ormerod (as well as screenplay writer Rachel Bennette) didn’t go all out in making their stars look good, and for keeping a fairly dry 19th century novel raunchy.

In 1890 Paris, Georges Duroy (Pattinson) is an ex-soldier barely eking out a living as a clerk; for clarification of what kind of movie this is (and what kind of man Georges is), he’s so broke that he can’t afford to bang a cheap prostitute without a few francs from a friend. After a chance encounter with a former colleague, Forestier (Philip Glenister), Georges slips into a job writing about his experiences as a cavalryman; the catch is that he’s untalented and not terribly bright. His first article is ghostwritten by Forestier’s politically minded wife Madeleine (Uma Thurman), who continues to do so even after he rises in the ranks of newspapermen. And “slips into” is pretty much the operative phrase for Georges throughout Bel Ami; he floats upwards in society, not so much climbing upwards and being gently guided. Also, he has sex with a number of married women. First among these is Clotilde (Christina Ricci), a friend of Madeleine’s, as well as Virginie Walters (Kristin Scott Thomas), the repressed wife of his publisher (Colm Meaney).

Although the novel treats Georges’ rise as a scoundrel one step up from a peasant gaining power and wealth through skillful manipulation of the women of Paris, Bel Ami takes a more intriguing avenue. This version of Georges is essentially a pawn in games he barely has the wit to know exist, let alone competently play. His column is used for the political machinations of Madeleine, but all he thinks of is to fume that everyone knows it’s ghostwritten. He gains a large inheritance tainted by an implication of cuckoldry, and all he can think of is to seize it, only to later learn that he’s been scheming for pennies while others pull down millions. It’s an interesting take on the story, one that even borders on a feminist inversion of gender struggles; a very telling scene has Georges now married to Madeleine, attempting to seduce her while she writes, only to find himself on the painful end of a quickie bout of sex. It’s somewhere between amusing and somewhat disturbing, particularly when he’s clearly in pain and begging for her to stop. There’s even a brief moment in which Madeleine (whose face is obscured) strokes his face with what seems like a disproportionately huge and masculine hand.

But scenes that interesting are few and far between in Bel Ami. Although a brief montage of Georges triumphantly writing a column himself and his editor quickly dismissing it as childish, near-illiterate trash is genuinely funny, the bulk of the movie is split between Pattinson looking contemplative (i.e., sulking) and Pattinson having sex. Although casting him as a vacant doll is a theoretically inspired choice, it doesn’t actually translate to being riveted to the screen or even caring much about him. The solidly talented supporting cast doesn’t get nearly the amount of presence they deserve, instead mostly serving to bolster Pattinson’s lackluster. I can’t fault a movie that has numerous sex scenes with both Ricci and Thurman in the bodice-ripping tradition, nor can dismiss that Bel Ami sometimes borders on an interesting feminist take on the subject matter. But neither of those ideas coexist easily in a single film, particularly when they’re weighed down by a wooden lead. They certainly don’t in Bel Ami.