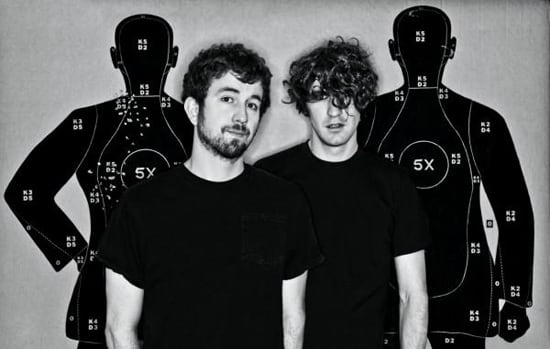 Three years after their smashing breakthrough LP Post-Nothing, the Vancouver duo of Brian King and David Prowse are back with Celebration Rock, a record that not only avoids the dreaded “sophomore slump” syndrome, but improves upon their previous effort in a myriad of ways. With just guitar and drums, Japandroids bring not only the noisy, youthful energy that characterized the first album, but also demonstrate mature, thoughtful, yet always fully accessible, songwriting chops. In the midst of a globe-trotting tour that will take them to England, Spain, Portugal and the U.S., Prowse and King were kind enough to answer a few questions via email for Spectrum Culture about the origin of their name and unique visual aesthetic, their relationship to the word “punk” and what the Gun Club really means to them.

I saw Japandroids perform last fall in Urbana, Illinois. I have to say that the title of your new record, Celebration Rock, seems to sum up what you do live. The show felt like a kind of celebration of music. How did you attempt to capture this feeling in the studio?

David Prowse: Well, we just enjoy playing music as loud as possible, and that goes in the studio as much as anywhere else. We try to err on the side of getting a take with really good energy, rather than getting the “perfect” take. On all those old Sonics records, it sounds like they’re playing so hard that the songs jump out of the speakers at you. We want that same feeling on our recordings.

Your lyrics on Celebration Rock have become more expansive and complex. What have you read or listened to lately that has influenced you as a lyricist?

Brian King: In retrospect, the only work I can see reflected in the lyrics of Celebration Rock is Under The Volcano by Malcolm Lowry, a book I read twice during 2010-2011.

You cover the Gun Club song “For the Love of Ivy” on your new album. How has that great band influenced and/or inspired you?

BK: Personally, in all matter of terms related to (and of) inspiration and influence, the magnitude of discovering The Gun Club cannot be understated. For me, they utterly and instantaneously shattered everything I thought I knew, not only about music, but my taste in it, laying waste to the appeal of whatever else I was listening to, and without apology forcing me to rethink my entire record collection in the context of one single record.

Do you associate the label “punk” with your own music? What does this word mean to you?

BK: Punk is no more a music genre than Pluto is a planet. Whatever it was/is/will be is inconsequential with respect to Japandroids. The moment Japandroids and/or its music is defined by a label (as you so eloquently described it) as bastardized and tainted as punk, is the moment it ceases to hold any and all power, as any and all labels (especially those as maligned as “punk”) serve only to belittle the music and distract the listener from elements grossly more important than any single word and it’s connotation.

If you had the opportunity to collaborate with any artist, who would it be, and why?

DP: It’s hard to imagine bringing anyone else into this band, since it’s been a two piece band for so long, but the idea of working with other artists is very intriguing. I’m really hoping we can collaborate a bit with Cadence Weapon at some point on this tour, at least in a live setting. Brian and I are both really big fans of his music, and we’re very excited to be touring with him in the UK as well as the US and Canada. Has anyone ever tried to combine rap and rock before? Doesn’t that sound awesome?

I have always resonated to the lyric, “… We used to dream/ Now we worry about dying” from “Young Hearts Spark Fire.” Was this line inspired by any particular real-life circumstances or events?

BK: Whether or not those particular lyrics (of which I myself did in fact write) were/are inspired by actual ‘real-life’ circumstances and/or events could not possibly be of any less significance. And while this conclusion is sure to be met with both hostility and disappointment, the question in and of itself has proven this to be true; at least, in essence. Having said yourself that you’ve always resonated with the lyrics in question tells me that there is something inherent in those lyrics, independent of their background and/or fruition, that ignites a spark of imagination within you, subsequently conjuring emotional feelings of a distinct character. Given the individual (and hopefully personal) nature of this interpretation, any attempt by yours truly to explain or clarify the inspiration(s) behind the aforementioned lyrics can only serve to lessen, or worse, cheapen your uniquely idiosyncratic interpretation.

How did you come up with your band name?

DP: It’s a part of a long series of compromises. Brian voted for Pleasure Droids, I voted for Japanese Scream. Put them together and you get Japandroids.

Your album covers have a distinctive aesthetic to them, one that automatically identifies the record with Japandroids. How did this design come about?

BK: As the years pass – each one falling from the cosmic centre like the peel of an orange from the hands of man (in summer, of all seasons…) – ‘the album’ finds itself a reluctant runaway from all things previously known, destined to break free of its indebted and historic convention, and evolve exponentially from its traditionalist past into the inherent contradiction of both a worthless (and intangible) spark of sacrilege, and at the same time, the most valued and sacred representation of all things holy, to the point of habitual ingestion and regurgitation. As this is commonly known and understood, it is therefore of no surprise that the album cover, as prized and exalted as it is as both a visual allure and physical keepsake, has leisurely lost its lustre. What for three generations was a symbol of expression and vice, has slowly and painfully eroded into nothing more than a meaningless facade to all but the very few who refused to let modern conveniences prey upon the weakness of their wills. The “distinctive aesthetic” to which you speak is a righteous (and quite possibly futile) attempt by yours truly to not only continue, but build upon the longstanding tradition of album covers to instill the (potential) listener with the necessary sense of awe and wonder required to own and appreciate fully the album as it was originally intended, with the specific subtleties inherent in the graphic design and color scheme serving only to refine said awe and wonder as specifically and poignantly as is possible.

Do you enjoy playing on bigger stages these days, or do you prefer the intimacy of smaller venues?

DP: I definitely feel more comfortable in small, sweaty clubs, but it’s incredibly exciting to play in front of larger audiences. There’s an amazing moment that happens when you stop being nervous and you realize a huge festival crowd is on your side and cheering you on. I can’t really explain how special that feels, and how grateful I am to have been able to experience something like that.

What do you do to remain focused and inspired while you are on tour?

DP: Playing live shows and traveling are my two favorite things in the world. Brian and I both realize how lucky we are to be given the opportunity to do what we do, and we try to play every show like it’s our last. Touring will wear you out sometimes, but even at the end of a tour I’d much rather be playing shows than sitting around at home. It’s important to take a second to actually think about how amazing it is to be able to travel and play music every day for a living.