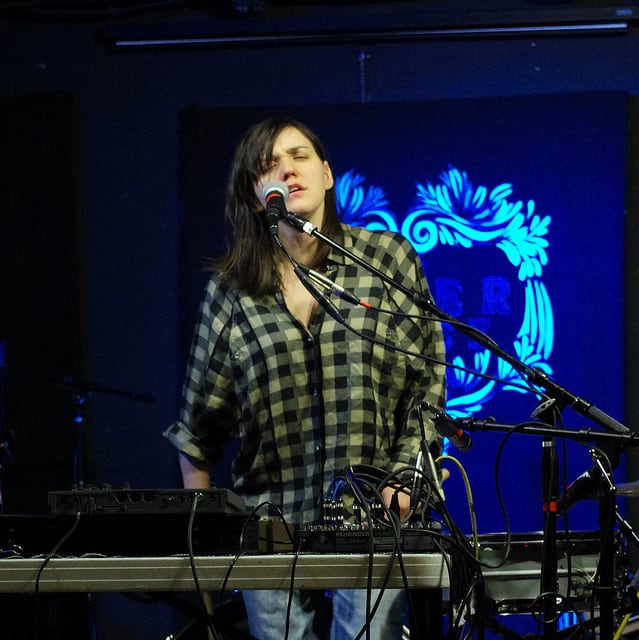 To match the fairly elaborate setup before her, crafty multi-instrumentalist Emily Wells brought sounds simple as well as appropriately complicated. With two boards of keys, loop kit, a few huddled drums, melodica and violin in the wings, the solo genre transgressor was instantly poised to conjure the mélange of rhythm, classical virtuosity and technical finesse that has won increasing attention, particularly since 2008’s buzzed-about The Symphonies: Dreams Memories & Parties, as well as this year’s Mama.

Wells did not wait long before launching into the shaking luster of the latter album’s “Mama’s Gonna Give You Love,” opting for a bare take that accentuated the track’s strongest elements. Tambourine and bass drum provided the bounce. Melodica gave it whistle, cacophony rising in the deconstruction underpinned by Wells’ evocative growls. Violin sneaked its way into follow-up “Come to Me,” all easy ballpark organ, Gospel and singing of blue jays at first, until percussion diverted it from the more crystalline folk roots.

Staccato violin hustled in “Symphony 1 – In the Barrel of a Gun,” while a heavy hip-hop hook buoyed some plucking in the sample. Wells beat drums between wails of “Nothing’s gonna stop us now/ except the long, long lonely.” A sparse shanty transitioned into a simple blues stomp (just Wells and tambourine) as the floor filled. Cymbal splashes and spiky violin riding insistent bass carried Wells all the way through “Symphony 6 – Fair Thee Well & the Requiem Mix” to the gentle intercepts of “Dirty Sneakers and Underwear.” Quieted organ and beamed-in percussion kept it meek but mighty.

Members of recent tour-mates the Portland Cello Project, trafficking in the same blend of hip-hop and classical that Wells does, accompanied her for the set’s back half. With ukulele and cellos, French horn and flute, “Piece of It” rang out in rich, vibratory unison, Wells’ smoke-silky vocals weaving with plucked cello. Bare chords echoed amid rumbling synth on the stark and clear “Fire Song.” The smooth beat of “Don’t Use Me Up” (about “friendship, whisky and Jesus”) brought out shallow-breathed flute that drew the track out impossibly. And “Passenger” and Notorious B.I.G. cover “Juicy” – “dedicated to Li’l Kim” – featured heavy-hitting beats with sweeping cello pacing alongside.

For the encore, Wells offered the imploration to “grab the little guy next to you and get down” and a classic pop-modern mash-up of Peggy Lee’s “Fever.” Then, Portland Cello Project sitting out, just Wells and ukulele, escalator vocals swinging sweetly on “Take It Easy.” With a sound that lends itself well to live performance (stumbling blocks in the looping process – which Andrew Bird is even susceptible to experience – notwithstanding), it’s no surprise the audience reacted appreciably throughout the evening. In crafting turns that swayed with violin and crackled with her croon while always punching with hefty rhythm, simple or complex went over just as easy.