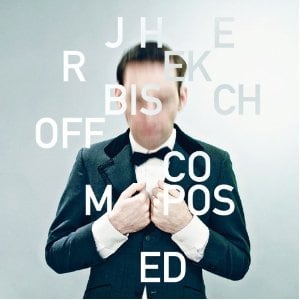 [xrr rating=4.25/5]It sounds like the daydream of Music Comp majors everywhere: write a chamber arrangement that sounds like a Technicolor set piece number Bing Crosby might’ve sang to Rosemary Clooney back in the day and have… who should it be?… David Byrne (perfect!) perform the vocals on it. Dream something else, folks, because Jherek Bischoff just did it. Though the Talking Head might be the most attention-getting name among them, Bischoff’s collaborative orchestral work, Composed, brims with contributions from the likes of legendary Brazilian singer Caetano Veloso, Mirah, Faun Fables’ Dawn McCarthy, French sensation SoKo and fellow Parenthetical Girls bandmate Zac Pennington – not to mention instrumental embellishments from Wilco’s Nels Cline and Deerhoof’s Greg Saunier. That’s a lot of wow factor and it’s not for nothing – Composed is somewhat like a cast recording of a production that has yet to be written, a soundtrack to a movie of which there is no movie, only a soundtrack. You get to author the story arc as you listen: this is not so much an opportunity as it is something that just happens.

It’s hard to say what’s more enchanting, the story you make for yourself from the songs of Composed or the story of the record itself. This is a labor of motion and devotion, Bischoff biking to and from the homes of the contributing musicians, recording on one mic and one laptop each of the instrumentalists’ parts individually. The entire affair was composed at first by Bischoff on a ukulele. Guest performers consulted on lyrical aspects of their featured songs, and yet somehow, thematically, the poetic impulses of these disparate artists prove to be fantastically symbiotic. In the final stages, Bischoff then layered the recorded parts over each other, collecting up the confetti pieces of this far-flung orchestra. This approach was in part an effort to achieve an orchestral sound on a shoestring budget, but surely his process was interrupted, complicated, purified and perfected by this string-by-string deconstruction and reconstruction. In a music scene that loves its DIY bedsit aesthetic, Composed, for all of its humble production, aspires to be something grandiose; and it is.

After a short instrumental intro – 46 seconds of strings that seem to relay the sadness that goes along with daybreak – the tempo hitches up with the Byrne collaboration, “Eyes,” a song that feels like a waltz even though it isn’t a waltz, an affectionate crooning by Byrne that has me gliding over a polished ballroom floor with him, taffeta skirt rustling, my white-gloved hand resting on his suited shoulder. Imagine Talking Heads covering one of Rufus Wainwright’s more fey, stagey numbers. Along comes the ingénue in “The Nest,” a swinging, dramatic story-song performed with the bell-bright voice of Mirah, glockenspiel, violin and the avian flutter and trill of flutes circling around the sentiment, “In those times when the weather was fair enough/ I had relied so faithfully/ Without a doubt you would be there for me/ I swallowed those stones.”

Two of the selections from Composed borrow from existing works and are beautifully repurposed. “Counting,” featuring Evangelista’s Carla Bozulich, is a cover of ‘60s folk singer Bob Lind’s creation, Bozulich applying a shuddering and alive delivery to a song that was originally rather self-consciously twee. Caetano Veloso brings to life “The Secret of the Machines,” the lyrics of which were adapted from a Rudyard Kipling poem. Plucked strings mark time and tiptoe until they collide with Veloso’s voice, at various points slashing and smearing between lines, a playful sort of foil to his relaxed melody. This selection is also a limelight for Greg Saunier, whose buoyant bass drum bounces and free form, stumbling syncopation at the song’s end lend it a wonderland whimsy, like a wind-up toy gone berserk.

The curtain falls as new scenery is wheeled out and a different protagonist enters stage right, each song its own little act. Bischoff’s selflessness is perhaps a big reason that Composed fits together as a play so seamlessly – appearing as the featured vocalist only on “Blossom,” he encourages his guests to craft their own contributions. He asks for interpretation instead of performance and as a result is gifted with intricate, unconventional pieces of art. Rumor has it that as to live classical music, Bischoff has only ever attended two symphonies and one opera, meaning that he essentially was able to write something like it principally on instinct and autodidacticism. Composed is indeed a lesson in education through absorption; I feel like I learn and realize and dream something ever more chimerical each time I listen to it.