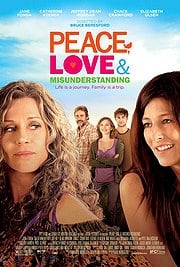 [xrr rating=3.5/5]There is very little emotional weight in Peace, Love and Misunderstanding, which is wholly expected from a film that is essentially a reverse “Gilmore Girls” but with less shouting. The film never tries to psychoanalyze, and dispensed wisdom does not linger long enough to get stale. And thankfully, the characters would much rather pronounce something inexplicable and move on with their lives than pick everything apart in long, tiring discussions.

New York lawyer Diane (Catherine Keener) and her impossibly uptight husband Mark (Kyle MacLachlan) remained together long past their marriage’s sell-by date for, as they say, the kids. Except they are no longer kids, as Zoe (Elizabeth Olsen) is already in college and Jake (Nat Wolff) is headed there next semester, so Mark demands his divorce moments before a stuffy dinner party. The morning after, Diane packs a suitcase and her two children into the family car and heads for her mother’s home. But this is no ordinary run to mama in troubled times; Diane hasn’t spoken to her aging hippie mother Grace (Jane Fonda) in two decades, and Grace’s grandkids have never met her.

Grace lives in the past, or rather in the culture of the past, though the usual stunted emotions evoked by an old hippie in tie-dye tunics and patchwork jeans does not necessarily apply here. Grace greets her estranged family with a hug and a goofy metaphor as though they had only been away a few months, while Diane seethes and complains and white-knuckles her own personal brass ring, unable to forget — or forgive — even one moment of her past.

It’s refreshing that the conflicts in Peace, Love and Misunderstanding are mostly surface conflicts, including the 20-year split between mother and daughter. It’s expected that the film will take easy shots at Diane for being uptight and unforgiving, or at Grace for being spacey and selfish, but no clear moral lines are drawn, the focus instead being on how family members manage conflict. Much of that is due to director Bruce Beresford’s deft approach to the material. Known for bringing out strong characterizations in his previous films such as Breaker Morant and Tender Mercies, the characters that populate Peace, Love and Misunderstanding are far more important than the plot.

The story, inasmuch as there even is a story, contains the requisite number of conflicts to overcome. Everyone falls in love, or at least in crush, immediately upon arrival at Woodstock, each with someone who is their emotional opposite. Yet life-improving growth isn’t the goal here, merely change, and just as in real life, overreaction seldom yields results. The enormous 20-year rift turns out to be not particularly enormous at all, summed up in one sentence by a frustrated Grace, that one sentence in turn explaining why this film isn’t really about a dysfunctional family at all, but rather a mostly normal family shaped by a few poor decisions that were always surmountable.

The film eschews shouting matches for exasperation, and nobody does exasperation better than Catherine Keener, who brings her trademark brittle emotions to the role that, unfortunately, offers her little else. The film is frankly saved by actors and a director refusing to be stifled by a formulaic script. And regardless of whether Jane Fonda’s “Hanoi Jane” reputation is deserved or not, it’s a curious, perhaps even brave, step for her to play an aged war-protesting hippie, estranged from her family and just ditzy enough to be clueless and selfish. Thankfully Fonda’s performance is fun and light, which is no mean feat given her own counterculture past is about as controversial as one can get. Elizabeth Olsen creates a believable character out of the intolerant vegan stereotype she was written as, while Kyle MacLachlan and Rosanna Arquette stand out despite their inexplicably tiny roles.

The film’s quiet charm is a welcome change from the crying jags and melodramatics that usually fuel family dramadies. A little precious at times but always entertaining, Peace, Love and Misunderstanding still manages to subtly point out that philosophies which were somewhat revolutionary a few decades ago are now mainstream, and that it’s possible to laugh with the old-school hippie movement and not at it.