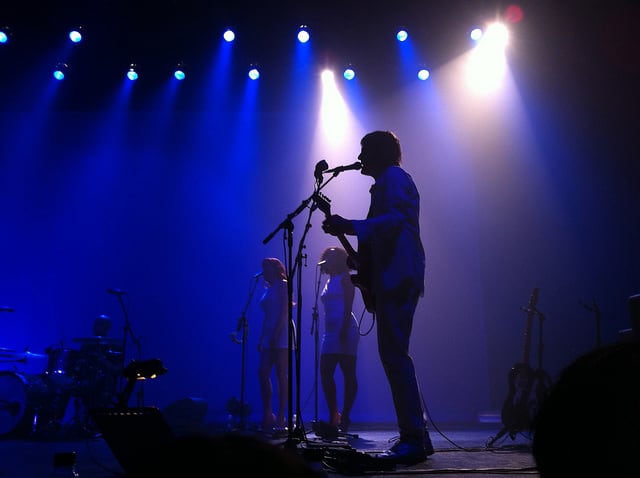 Portland is known for being a quirky place, and as a long time resident, I cannot contradict that. We like our food carts, we’re kind of obnoxious about being “weird” and bicycles are a way of life rather than a relatively simple method of transportation. All of that is to say that when a friend of mine bumped into Spiritualized’s Jason Pierce and his opening act Nikki Lane in a bar before their show at the Wonder Ballroom, I was irritated because I had only had met one rock star that day and he met two. It’s just that kind of town. And while Spiritualized may be from the other side of a country and an ocean from the west coast, Portland welcomed Pierce and the band with open arms and a sold out venue.

The floor of the Wonder was still half full when Nikki Lane took the stage, with a few loners hugging the walls and knots of hipsters/not-hipsters chatting quietly. Lane performed solo, country-inflected songs on an acoustic guitar and throwing bits of banter into the crowd. Truth be told, most of the audience seemed relatively uninterested, though her set was politely received; they were clearly here for Spiritualized. And no wonder: after the dissolution of legendary UK drone rockers Spacemen 3 and a decade of somewhat forgettable releases, Pierce has had quite the comeback. The shadow of Pierce’s serious health problems hang heavy over both Songs in A&E (2008) and his most recent album Sweet Heart, Sweet Light (2012), contextualizing the gloom and morbidity of the former, while giving the latter a sense of yearning and peace. Both records are some of the most pop-oriented albums Pierce has recorded, while still retaining his unique sound, a hybrid of vast gospel harmonies and thrashing, nearly crude rock. So, short of touring with an orchestra and a choir, how does that translate live?

By being fucking loud, of course. Spiritualized has always existed primarily as Pierce and a rotating cast of musicians (the band currently touring as a six piece, with a pair of female singers backing up Pierce) and while his songs come across as huge and trippy on record, they’re enormously loud and sometimes borderline abrasive on stage, in the best possible way. Along with mono-monikered guitarist Doggen, Pierce opened the show by wordlessly waving at the crowd and then ripping into a squall of feedback-driven guitar noise, then segueing into “Hey Jane,” the epic opening track from Sweet Heart, Sweet Light. Backed by his singers, Pierce’s voice is as cracked and thin as ever, but entirely appropriate for the Christ-invoking lyrics he’s made his trademark, and while he left the bulk of the complex guitar lines to Doggen, he was the most riveting figure on stage (perhaps because he was the only one wearing sunglasses indoors at night).

Most of the songs the band performed that night were altered from their recorded version, either to compensate for the line up or radically rearranged; case in point, a mid-concert rendition of “Walkin’ with Jesus” from Spaceman 3’s 1987 opus The Perfect Prescription was drastically changed, but with none of the passion gone from the song: when Pierce sang, “I know I’ve done wrong, but I’m in heaven on earth/ I know I’ve done wrong but I could have done you worse,” neither the years or arrangement altered its wistful, troubled yearning. The set list stretched through the majority of Spiritualized catalog, with lesser known tracks like “Rated X” popping up just a few songs before “Soul on Fire,” one of the catchiest, most pop-oriented songs Pierce has ever written. As the show progressed, the light show that first strobed the audience turned into a series of crude animations, some seemingly taken whole from ‘90s era screensavers, all blocky rooms and trippy lights. It was both curiously outdated and appropriate for music that sounds so timelessly simple, and still somehow vast and immersive.

The audience cheered every song (save for one drunken woman I encountered who angrily claimed that he had ruined the show by playing “new boring songs”), but were clearly waiting the show for one very important announcement: “Ladies and gentleman, we are floating in space.” When that clipped, pre-recorded phrase rolled through the Wonder, the crowd went wild, briefly threatening to drown out Pierce’s solitary voice intoning “{All I want in life is a little bit of love to take the pain away.}” Fortunately, they settled down as Pierce and his backup singers formed a ragged three part harmony of Elvis and world weariness, the music fading to near silence and then cascading back in triumph. Spiritualized played more tracks from Ladies And Gentlemen We Are Floating In Space as the show went on, culminating with an encore of “Cop Shoot Cop…” but it was clear the climax of the show was the title track, the moment for which Pierce is beloved. It was a quick, brief moment of shared joy and wistfulness…which sums up Spiritualized perfectly.