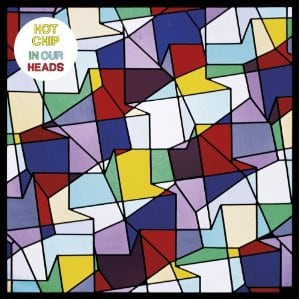 “Hot Chip will break your legs/ Snap off your head.” The British dance-punk outfit responsible for repeating that tongue-in-cheek disclaimer on their masterstroke sophomore album The Warning has precariously teetered between mirth and mawkishness throughout their five album discography. Not only does the band swing between the contrasts of Alexis Taylor’s tremulous vocals and the robust sturdiness of Joe Goddard’s, but their songwriting has often paired overly forlorn or flirtatious lyrics with rambunctious synth-pop that’s carved out Hot Chip’s niche. Few other bands would take a song with lyrics oozing a hold-me-all-night yearning like that in “I Feel Better” (off 2010’s One Life Stand) and match it with a bizarre music video featuring a soul-swallowing skeletal figure referred to colloquially as “Cancer Jesus.” And while the band has been both heralded and decried for mellowing out as the years have gone on ─ and though they have indeed added spit and polish to their sound ─ they’ve never completely strayed from the formula (as illustrated in The Warning’s “Over and Over”) of repeatedly churning out danceable quirk “like a monkey with a miniature cymbal.”

Typically, when an album is described as “more of the same” it’s a criticism, but with Hot Chip the reverse seems to be true. In fact, it’s when they switch things up that the tenuous balance whirls off kilter. New release In Our Heads illustrates how Hot Chip can excel at sticking to their bread and butter of infectious dance music coupled with (perhaps ironically) sappy lyrics, and how they can also misfire when they strip down to earnest attempts at balladry. But the new album does offer some outright bangers, with single “Night and Day” leading the charge. The music video even possesses a visual representation of the band’s dichotomy with two spaceships, piloted by amply-Afroed funnyman Reggie Watts and wispy model Lara Stone, converging into a yin yang by the video’s end. Lyrically, “Night and Day” is a song about a nerd sweet-talking his way into some steamy sex, and musically it’s ready-made for the club with boom and pulse and photon blasts that demand heeding Taylor’s calls to sweat. And this track is joined by other white hot offerings. “Flutes” injects hypnotically chanted vocal loops and a four-to-the-floor beat that’s subtler than “Night and Day” but more musically complex. And opening track “Motion Sickness” drips with the band’s more nuanced electronic work, with fluttering ribbons of synth and bursts of brass setting the album into motion.

But in recent endeavors, Hot Chip has tended towards diluting the upbeat synth pop and club fodder in favor of highlighting the often maudlin lyrics in sleepy ballads that simply fall flat. Bearer of a Howdy Doody haircut and gramps glasses, Taylor is a cool geek of the David Byrne order, but his quavering voice comes off as overly flimsy when not backed by the thrust of slick beats or the vocal support of Goddard and backing vocalist Al Doyle. And with more focus on sentimentality over the furious energy their live performances radiate, it becomes quickly apparent that Hot Chip’s lyrics can be fucking corny. “A heart is not for breaking/ It’s for beating out all the life it needs to begin,” sings Taylor during the slower portions of “How Do You Do It,” throwing a wet blanket over a song that otherwise has its moments musically. Part of the fun of Hot Chip’s danceable melancholia is that their melodramatic proclamations of love pair remarkably well with upbeat electronic dance music, but the actual words are almost incidental. When the tempo is suppressed ─ such as in tellingly listless tracks like “Now There Is Nothing” ─ we’re left with an attempt at genuine sentiment that’s simply not Hot Chip’s bag.

Unfortunately, In Our Heads also musically misfires on a few tracks. “Ends of the Earth” and (even more overtly) “Don’t Deny Your Heart” ramp up the ‘80s retro synth, almost becoming caricatures of that era. Meanwhile, “Look at Where We Are” plods along and is yet another example of Taylor’s unfortunate dominance of the vocal duties, Burial-esque manipulations not enough to salvage the song. Despite too much of the album drifting into electro easy-listening territory, and the songwriting sounding more and more like a class clown trying in vain to be serious for a minute, In Our Heads will still manage to add some heat rocks to Hot Chip’s famously scorching live sets. But when it comes to recorded music, I prefer bands of this ilk threatening to break my legs and snap off my head rather than imploring me not to deny my heart.