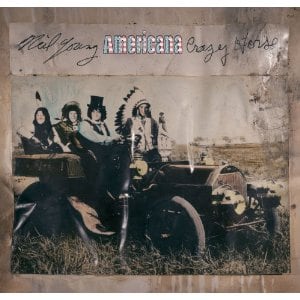 [xrr rating=2.0/5]Neil Young is a historically restless artist. For over four decades now, he’s been steadily shuffling band members in and out of his orbit, and trying out different musical concepts to see if anything fits. It’s an approach that’s responsible for some of rock’s greatest music, but in the two decades since Harvest Moon (arguably his last masterpiece) it’s resulted in albums that are based on interesting concepts, but are ultimately lesser entries in his catalog. The ideas of Neil cutting a soul record with Booker T. and The MGs (Are You Passionate?), revisiting his acoustic roots (Silver & Gold and Prairie Wind) or bashing out an off-the-cuff record in protest of the Iraq War (Living with War) were all easy ones to get excited about on paper, but the records themselves weren’t very good.

Americana is an unfortunate double-whammy in that both the concept and execution are uniformly bad. First, let’s examine the concept – Neil giving the Crazy Horse treatment to a batch of American folk songs with origins dating from before the 20th century. Several of his contemporaries (Brian Wilson, Paul McCartney, Iggy Pop and Rod Stewart, for example) also have recent covers albums derived from non-rock sources, so he‘s hardly coming out of left field on this one. However, while those artists released covers albums to pay tribute to their songwriting heroes, Young’s intent with Americana was to restore the original, much darker, intent of these American-as-apple-pie songs. Neil is successful on that front in that he plays the full unabridged songs as they were meant to be heard. Unfortunately, whatever meaning songs like “Oh Susannah” or “This Land Is Your Land” once had, their spirit of Americana was killed off long ago, through years of grade-school sing-a-longs and general Disney-fication. Nobody, not even your favorite band at their height, can breathe enough life into these songs to make you would want to listen to a whole album‘s worth. Young himself even appears to get bored by Americana’s concept, stepping outside of its constraints to cover The Silhouettes’ doo-wop classic “Get a Job”, and crossing the Atlantic Ocean for the British national anthem “God Save the Queen”. No, not the Sex Pistols song – although that might have worked pretty well, come to think of it.

We all know that whenever Neil gets together with Crazy Horse there’s going to be a lot of sludgy guitar playing and a general disregard for cleanliness or perfection – an approach perhaps best described by the title of their 1990 album Ragged Glory. Well, it’s been eight years since the last time Neil and Crazy Horse combined forces, and from the sound of it, the “glory” is gone and what’s left is just plain ol’ ragged. Everybody sounds a little too loose and under-rehearsed (or, as it‘s more commonly known, “sloppy“), and Young’s strained vocals are a constant reminder that the man is now a senior citizen. Yet he sounds like Pavarotti compared to bassist Billy Talbot’s painfully off-key (and sometimes poorly mic’d) backing vocals. Of all the voices you hear on Americana, only Neil’s wife, Pegi Young, hits enough notes to put her above the Mendoza Line of singing.

While I take some comfort in knowing that, at age 66, Neil is stubbornly following his own creative muse and showing no regard to what’s hip and fashionable, Americana is a dud, plain and simple.