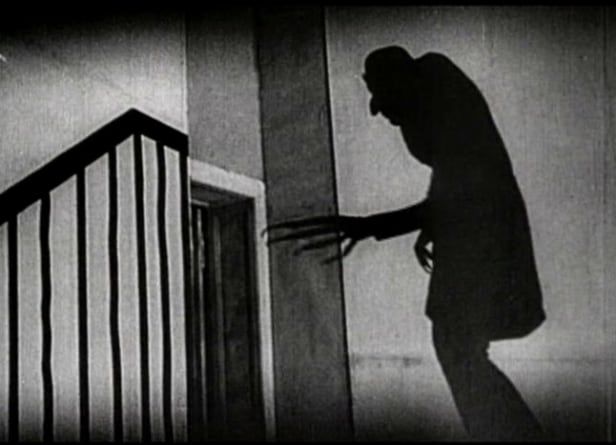 F.W. Murnau’s Nosferatu, one of the most well-known films of the silent era, is a subject ripe for discussion of remakes not only because of its faithful replication nearly 60 years later, but also its mass proliferation across the entire horror genre that followed from it. As much as other works flowed out from Murnau’s Expressionist nightmare, so too does the movie itself owe to prior works. An infamously unauthorized adaptation of Bram Stoker’s Dracula, Nosferatu is itself a “remake,” and one that bankrupted the studio that produced it when Stoker’s estate destroyed them for copyright infringement.

Made before the technological and poetic leap Murnau took with 1924’s The Last Laugh, Nosferatu looks almost conventional, despite some glorious flourishes. Expressionism suits the material perfectly, with Hutter (Gustav von Wangenheim), the Harker stand-in, as exaggerated in his pearl-toothed smile and full face as Renfield proxy Knock (Alexander Granach), introduced hunched over in mad greed, his rotted teeth and gaunt frame instantly unsettling. Count Orlok (Max Shreck) is, of course, a masterpiece of outlandish effect, not the debonair tempter of classic Dracula depictions, but a hideous monster borne of plague and vermin. The anti-Semitic traits of Orlok—his large, hooked nose and his proliferation of plague rats (a common superstition during times of disease)—cause more than a little discomfort, but Shreck’s devilish performance suggests a more elemental evil than the grotesque Jewish caricature that grimly forecasts the social scapegoating to come in Germany. 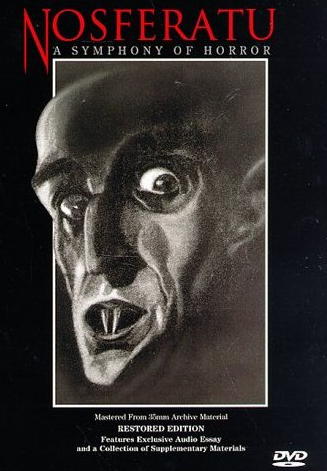 If Murnau’s Nosferatu lacks the vastness of his Faust or the freedom of his soaring camera in The Last Laugh or Sunrise, it nevertheless shows off Murnau’s considerable technical élan at every turn. Murnau propels his atmosphere and scares on the strength of the editing, which bolts through unsettling glimpses and glances before holding on shots until the tension is unbearable. The shot of the cursed ship’s cargo door slowly inching open with solemn inevitability is perhaps the earliest demonstration of how framing can be as terrifying as the actual monster.

In comparison to the perfect pace of Murnau’s version, Werner Herzog’s subsequent 1979 remake/homage is downright lethargic. Though Herzog, who considered the original film to be the finest movie to ever come out of Germany, clearly loves the film and even recreates some shots beat for beat, his Nosferatu feels nothing like Murnau’s. That is to its benefit, though, and Herzog’s vampire film emerges not only as one of his finest works, but one of the all-time best remakes.

The 1979 version is stuffed to the brim with Herzogisms, opening with handheld shots of ancient, desiccated corpses frozen in what almost seems fear. And where Murnau sprints through the travel sections of his movie to get to the point, even under-cranking the film to make Orlok’s carriage move with inhuman speed, Herzog luxuriates in the in-between, drawing out the foreboding but beautiful imagery of the grim lands around Dracula’s castle. (Herzog reverts back to the proper names from Stoker’s book, with some minor exceptions.) Even the most apparent callbacks to the original movie have their own flair, such as an extreme long shot of Dracula’s dining room that nearly takes on Expressionistic traits. But Herzog holds the shot until it becomes less expressive than insular, capturing the cold space that defines Dracula’s miserable existence. 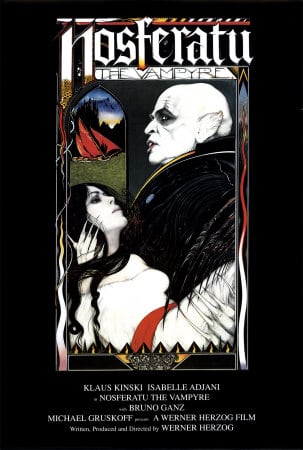 The true highlight of Herzog’s unorthodox take on the material is also one of the most beautiful sequences the director has ever filmed. In it, the Vorspiel from Wagner’s Das Rheingold rolls over a montage of images as Harker (Bruno Ganz) stands at the bottom of a mountain, waiting for transport up to Dracula’s castle. Clouds roll overhead to plunge the area into darkness, a carriage arrives and Harker is taken past roiling waters as the music travels through its thrilling peaks and troughs. Terrence Malick would use the same music cue for his overwhelming coda to The New World, but Herzog’s own spiritual/natural montage is no less powerful, and it manages to capture an entirely different mood than Malick, finding the unsettling effect underneath Wagner’s gorgeous composition.

Where Herzog’s version truly excels, however, is in its casting. Isabelle Adjani plays Harker’s wife with such wide-eyed terror it’s a miracle her eyeballs don’t pop out of her head. It’s elemental fear at its best, and she clarifies some of the strange behavior of the protagonist’s wife, shoehorned into a vague role in both versions. The great Ganz adds a weariness and composed unease to Harker in comparison to von Wangenheim’s earlier performance; it is this role, and Ganz’s interpretation, that benefits most from the transition from silence to sound. But of course, the main draw is Klaus Kinski as Dracula. Never has the volatile actor’s energy been so masterfully composed, and therefore so frightening. When Harker cuts his thumb slicing bread, the camera flashes to Kinski’s face not as he merely notices but as a jolt runs through him, snapping him rigidly to attention and charging the static air around him with insatiable hunger. But as scary as even these small moments are, Kinski’s greatest triumph is his tragedy. He targets Harker’s loving wife out of a misplaced self-loathing for his isolation, and he admits an overwhelming despair when he confides in Adjani, “Cruel is when you can’t even die when you want to.”

Less stylized yet more surreal than Murnau’s version, Herzog’s Nosferatu the Vampyre is one of the best advertisements for the potential of a remake. The director changes little from Murnau’s film, other than to incorporate some more aspects of Stoker’s novel, yet he produces a radically different mood, style and thematic focus from the same elements. Neither film is the greatest statement of its maker, but both directors did some of their finest work on this vampire story. Murnau’s picture practically invented film horror and set a formal precedent few have equaled since. Herzog’s, on the other hand, showed how complex, multifaceted, even moving that genre could be.