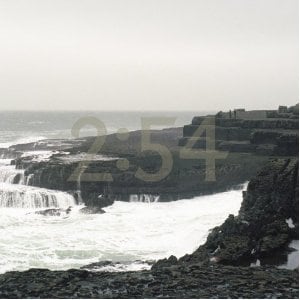 [xrr rating=2.0/5]Few critics seriously enjoy giving negative reviews. Shitting on someone else’s work falls somewhere between winning an internet discussion and slapping ice cream from kids’ hands – it means absolutely nothing and you look like an asshole doing it. In terms of pleasure derived, handing out tomatoes is a fleeting narcotic. And for all pretention of “defending the faith” or preserving an art form’s integrity, mediocrity will always be churned out so long as there is mediocrity to churn and someone to churn it, no matter the extent to which merciless takedowns proliferate.

That said, the eponymous debut of English duo 2:54 (siblings Hannah and Colette Thurlow) makes it very hard to be nice. From flat percussion and canned melodies to sloppy tremolo slathered on nearly every track, 2:54 leaves little to be genuinely excited about. Straddling the borderlands of shoegaze, early ‘90s alternative and watered-down dream-pop, its muted harmonies and guitar-centric focus could have doubled as virtues. Instead, the record largely revolves around a neutered version of the reined-in, unabrasive feel engineer Alan Moulder (who, along with producer Rob Ellis, comprises the record’s soundboard talent) lent Blonde Redhead’s 23.

Resultant from that studio choice, not much on 2:54 glows impressively, from the simplistic percussive underpinnings of opening track “Revolving” to repetitive follow-up “You’re Early,” whose tossed off lyrics (see opening verses “I’ve been watching/ I’ve been waiting/ For you” for reference) are standard on the record. “Watcher” aims for the slanted cadence of familiar, better entries in the genre but is bogged down by the choppy breathlessness of its co-vocalists’ turns. And “A Salute” even contains hints of nu-metal, that beast of creative paucity thought long extinct.

Shooting for dance floor magic with expansive chords and a spirited rhythm, “Easy Undercover” can’t muster it even after nearly four minutes of angular guitar and luscious sighs. Paired tracks “Scarlet” and “Sugar” twirl with something approaching the sensuous conjurations the album is clearly attempting at, though even they buckle under the weight of sluggish instrumentation and dull fuzz. “Creeping,” lead single and album closer, is the only track that really manages to go anywhere – its steamroller rhythm, insistent bass and hopscotch guitar see to that. Otherwise, the pleasures are few and far between.

By augmenting the elements already present on the record, the band might have made 2:54 into a fait accompli on par with the gloomy rush of Curve; instead, the result is more Shirley Manson than Toni Halliday, more cookie-cutter goth-lite wanderings than rivet-tight doom-pop. Conversely, if arranged more disjointedly and with less reserve, the album might have bore resemblance to the jarring, wilder output of Siouxsie and the Banshees or a more tactile Cocteau Twins, but it seems content to inhabit more middling territory. As it stands, 2:54 has neither the fullness of other, superior records nor the compelling push of comparatively more stripped-down affairs. There are few good hooks (literal or figurative) on offer. Being mean isn’t easy, or fun, so why make it hard to be nice? I suppose that trollish prince of Denmark said it best: “I must be cruel only to be kind.”