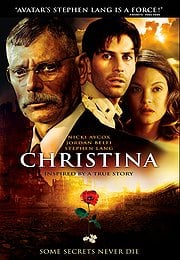 [xrr rating=1.5/5]Film’s closest genetic ancestor may be theatre, but it’s typically in a film’s best interest to avoid making that connection too obvious. That’s a lesson Larry Brand would have been wise to keep in mind with Christina, which has all the magnetism of a community theatre production coupled with all the beauty of a Lifetime movie of the week, crippled as it is by stilted acting and lifeless aesthetics.

Christina is essentially an exploration of the weight of the past, a work that takes itself far too seriously for its own good as it asks whether a statute of limitations is feasible in regards to skeletons in the closet. As an extremely minimalist work, Christina mostly focuses on three characters, the titular Christina (Nicki Aycox), her American G.I. lover Billy Calvert (Jordan Belfi) and her just pursuer Inspector Reinhardt (Stephen Lang), the latter two caught on opposite ends of a quest for the truth behind the past of the former. Christina is basically structured like a play, confined mostly to Christina’s apartment, with oddly colored flashbacks to her past during World War II mixed with antagonistic revelations about her history from Reinhardt and herself. In the right hands, such a restricted setting could yield great reward, but Brand presents the film as though it were merely a filmed version of a play, with little artistry or intelligence.

Worse, Brand’s assembled cast struggles to keep the work afloat. Aycox in particular stands out as a void of charisma, incapable of maintaining the requisite German accent (for much of the film, Aycox may as well be portraying a cartoonish Russian villainess) let alone projecting the irresistible personality and charming innocence her character is described as personifying. Belfi doesn’t fare much better as her love interest, but in his case it at least seems as though that may be a symptom of the role itself, which requires a lot of ignorance and bewilderment.

That alone would likely be enough to prohibit the film from achieving its ambitions, but to compound matters, Brand has poorly choreographed the film, utilizing nearly no visual flair and instead forcing every scene into the same bland parameters, squeezing any life that may naturally have been present in the scenes in favor of a lifeless anonymity. Lang does his best to enliven the work, but unfortunately his skills only serve to further reveal the utter lack of artistry on display. Great films expertly connect the visual and the emotional, grafting deep performances from actors to masterful photographic presentation, the script acting as the bridge between the two. But Christina is neither a work of great acting or beautiful visuals, it’s instead a thoroughly unremarkable work of poor acting and dull visuals, telling a story that’s even less engrossing.

By the time the central twist of Christina reveals itself, it’s difficult enough to stay awake let alone muster enough excitement to even respond to the narrative development. Given that the film’s central theme is that time, not bombs, is the destroyer of civilization, it’s nearly impossible to not monitor the time you yourself are wasting on the film, forcing an acknowledgment that nearly anything else would be a better utilization of your too short time on this planet.