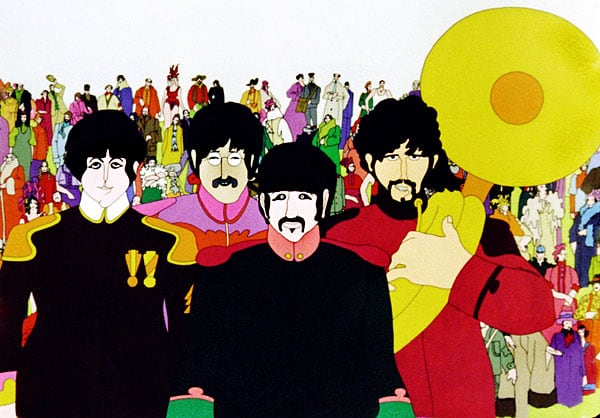 The Beatles were unenthusiastic about Yellow Submarine, the third of their three contractually agreed-upon films. While they liked the idea of an animated feature because it was an easy way to fulfill that contract with very little effort on their part, their previous experience with animation had not been a good one. The American television network ABC was showing an animated kid’s show called “The Beatles” at the time, its oversimplified sitcom antics disparaged by both critics and the group themselves. Some of the staff responsible for the ABC show were behind the Yellow Submarine project, and The Beatles had misgivings.

But if the Beatles were initially indifferent to the idea, the creators of Yellow Submarine were not. The project quickly grew to over 200 enthusiastic animators, all working together in a group effort to promote the ideals of the Beatles, at least as presented in their 1967 classic album Sgt. Pepper’s Lonely Hearts Club Band. Fueled by feelings of good will and, reportedly, plentiful alcohol, the end result was over a dozen babies born amongst the crew members and one remarkable, ground-breaking animated adventure. 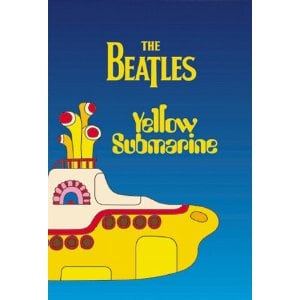 Pepperland is a beautiful world where people happily stroll through colorful gardens, listening to the music of the famous Sgt. Pepper and his Lonely Hearts Club Band. But all is not well. The nasty, music-hating Blue Meanies are lurking about, intent on destroying anything good in the world. They launch an attack on the unsuspecting citizens, rendering them nearly immobile and turning Pepperland bland and gray. Only Old Fred (voiced by Lance Percival) manages to escape, taking his yellow submarine through a sea of fantastical creatures and ending up in Liverpool, where Ringo is loitering by the river, just has he had been in A Hard Day’s Night a few years before. Old Fred convinces Ringo and his three friends John, George and Paul to return to Pepperland with him to help defeat the Blue Meanies. Their journey is a series of adventures in a myriad of seas full of colorful, exotic and sometimes dangerous creatures.

In its way, Yellow Submarine is not much more than a thin story linking together about a dozen really terrific Beatles songs. Though the film never quite shakes off its commercial sensibilities, it at least manages to mostly overcome them, imbuing the simplistic tale of heroic quest with satire, poignancy, dry humor and tremendous visuals. The animation is so stunning that it nearly overshadows the Beatles’ music, which is no easy feat. Styles vary frequently, though they are always rooted in the multi-colored psychedelia of the 1960s. One spectacular sequence set to “Lucy in the Sky With Diamonds” features rotoscoped images from early 1930s Hollywood musicals. There is no girl with kaleidoscope eyes seen in this sequence because you are her, watching Fred Astaire and Joan Crawford rendered in dazzling multicolored flashes that at times turn into unrecognizable scribbles, yet always return back to their original forms.

Yellow Submarine is less a product of the 1960s than it is about the 1960s. It was one of the first mainstream examples of that curious type of psychedelia that attracts both very young children and very stoned adults. Its aesthetics borrow heavily from children’s books, such as John Tenniel’s original Alice in Wonderland illustrations, but also cartoons like “Porky in Wackyland.” Yet the film itself was hugely influential in its own right; it is, after all, the movie that inspired nearly every early-70s funky educational cartoon and psychedelic kids show.

The story cheerfully veers through abject silliness, deep thoughts and puns with speed, occasionally doling out pointed satire, such as the red, white and blue vacuum monster that consumes everything around him, up to and including himself. Despite the overall feel of the film encouraging acceptance and peace, there is a hint of resignation throughout, as though greedy monsters and music-hating Meanies are simply a part of life that nothing much can be done about.

Which may explain the occasionally perplexing actions of our heroes. While traveling through the Sea of Monsters, the quartet cruelly insult an adorable blue space elephant skritching his tummy. He cries as they pronounce him ugly and kick him out of the yellow submarine that every one of us metaphorically lives in. Later, a Blue Meanie describes Pepperland as a tickle of joy upon the blue belly of the universe that must be scratched, referring at least tangentially to the elephant scratching his tummy earlier. But what does this all mean?

It means, perhaps, that it’s useless to try to make too much sense of the world of Pepperland, or of the actions of the quartet recruited to rescue it. Coherence need not apply in this land, and while that may undermine some of the metaphors the film strives for, it in no way diminishes the film as a whole. Yellow Submarine is such a delight you cannot help but forgive its few flaws while you sit back and enjoy the show.