October 21, 2020
Home Music Fiona Apple: The Idler Wheel Is Wiser than the Driver of the Screw and Whipping Cords Will Serve You More than Ropes Will Ever Do 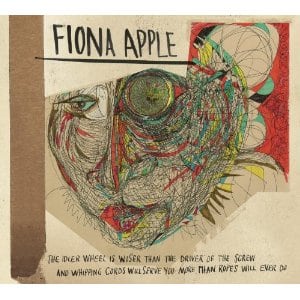 [xrr rating=4.25/5]All right. Deep breath. The title of the album being reviewed here is The Idler Wheel Is Wiser than the Driver of the Screw and Whipping Cords Will Serve You More than Ropes Will Ever Do, so you know it’s Fiona Apple. It’s not quite the filibuster that was her second album When the Pawn Hits the Conflicts He Thinks Like a King What He Knows Throws the Blows When He Goes to the Fight… [let me stop you right there –ed.] but it demonstrates that her head is in the same place it’s always been. It’s been seven years since her last full length release, Extraordinary Machine, which itself was the victim of a series of delays and record label vagaries to the point of write-in campaigns forming on its behalf. If nothing else, Apple fans are a dedicated bunch to still be so excited for a new album after such a history of postponements and the singer’s own media shyness.

And what is it that her fans take so much to heart that they’re willing to wait years between albums with no seemingly dissipation of anticipation? Perhaps it can be summed up with a few lines from The Idler Wheel…: “How can I ask anyone to love me/ When all I do is beg to be left alone?” Those lines from “Left Alone” are the essence of Apple. Her songs crave love and connection while violently rejecting it; she shuns the spotlight while still pouring her feelings into her music for all the world to hear. It’s a strange paradox (though not a particularly rare one among musicians), but a dichotomy always fascinates. The Idler Wheel… is Apple’s most stripped down, musically simplistic album, but it’s no less heartfelt or harrowing for that. To put it another way, the album shows little change in attitude or style from the singer’s previous work, but how could it? When her approach is to throw pure honesty into her music, any change would essentially be to add artificiality, the one thing you don’t expect nor want from her.

The relatively stark sound of The Idler Wheel… can be attributed at least in part to Apple’s role as co-producer (with longtime drummer/multi-instrumentalist Charley Drayton as Seedy and Feedy). While producer/songwriter Jon Brion is brought up in nearly every article about Apple, she seemingly hasn’t recorded with him regularly since the mysteriously abandoned sessions for Extraordinary Machine in 2003. Notably, the meticulously layered production style he’s famous for is almost entirely absent here, replaced by a percussion-heavy acoustic sound that focuses on Apple’s voice and piano. And while those paired elements have always been the core of her music, both the orchestral sweep of When the Pawn… and the pop hooks of Tidal and Extraordinary Machine are severely diminished. Instead, it’s mostly just the singer and her instruments.

Which is not to say that the The Idler Wheel… is a quiet album. Apple is arguably the most emotive singer of her generation, able to roar, weep and mutter in a single track and not miss a beat. Her vocals are unpredictable and always seem on edge, close to an explosion or a collapse, and the ten tracks here are no exception. Lead track (and first single) “Every Single Night” is the singer at her most basic: a simple piano melody until her voice rises up for the chorus, a sudden bellow that lifts the sadness up into anger and doubt. “Valentine,” one of the highlights of the album, becomes exquisitely tragic with the chorus “I root for you, I love you/ You you you you,” somewhere between longing and laceration. The Idler Wheel… also contains some of Apple’s finest lyrics to date. Her remarkable wordplay has generally taken a backseat to the power of her voice, but she has a gift for striking, sometimes disturbing imagery. The aforementioned “Valentine” contains the bitterly comic couplet, “I made it to a dinner date/ My tears seasoned every plate,” while “Werewolf” contains an opening gem in “I could liken you to a werewolf the way you left me for dead/ But I admit that I provided a full moon.”

Sixteen years and four albums into her career, Apple doesn’t show any signs of changing who she is as a musician (or as a person, if interviews can be trusted). If anything, she’s refined her tools and themes to their essentials, creating an admirable purity of sound and intention. Everything you’d expect from her is on The Idler Wheel…; the sorrow, the anger, the enigmatic stories of love turned sour, of devotion turned obsession. Conversely, she’s not prone to trying much of anything new. The pop elements that pushed Tidal into platinum status have been mostly excised, with a distinct lack of discernible hooks or sing-along melodies. A few of the later tracks, like “Regret,” border on filler. While the final song “Hot Knife,” a searing, lustful piece of layered vocals with her sister Maude Maggart, is one of the few stylistic departures on the album, it also serves to indicate how stylistically fixated Apple is. And while, for many musicians, that would be a flaw, in someone so passionate and talented, it’s a strength.