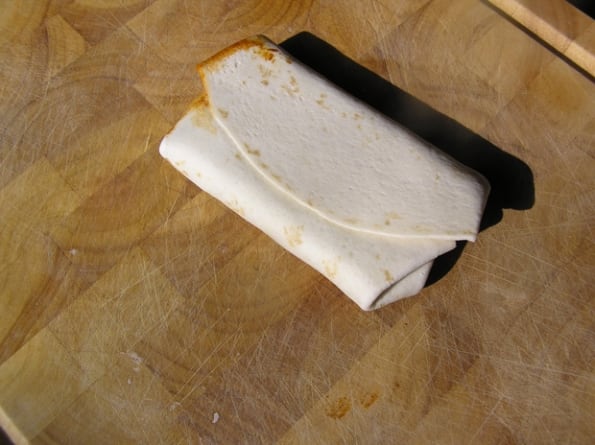 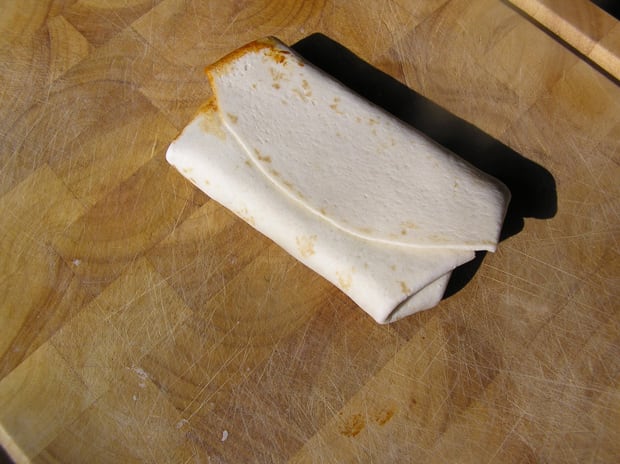 @mediawaltz asked us: How do you make a burrito that won’t fall apart?

The greater question might be “Why not just accept that your burrito is going to fall apart?” Acceptance of burrito failure is the answer to your problems and indeed, a metaphor for acceptance of our lack of control over life. Too philosophical? Probably.

No, definitely. You’re absolutely correct, @mediawaltz, to wonder why your burritos fall apart. Homemade burritos present some challenges that you won’t find in the professional burrito slinger’s kitchen. Firstly, make sure you find a half decent soft tortilla manufacturer to begin with. Many of the flour tortillas you can find in supermarkets are mass-produced, dried out husks, which are tough to form into a proper burrito because they crack easily. Find a decent Mexican grocer near you or experiment with the brands you can get your hands on until you find something workable. Once you check that step off, remember, even though the tortilla of your choice says “burrito size,” it’s not. You favorite Mexican place where you polished off that delectable, two pound, grilled steak burrito/behemoth last weekend gets better, fresher and much larger burritos than you can. I point that out because you will go home and try to stuff your burrito to the gills in an effort to recreate that version of Mexican food nirvana you just lived through. It won’t work. Simply put, you can’t stuff two pounds of carne asada into a one pound burrito. Scale you fillings appropriately. 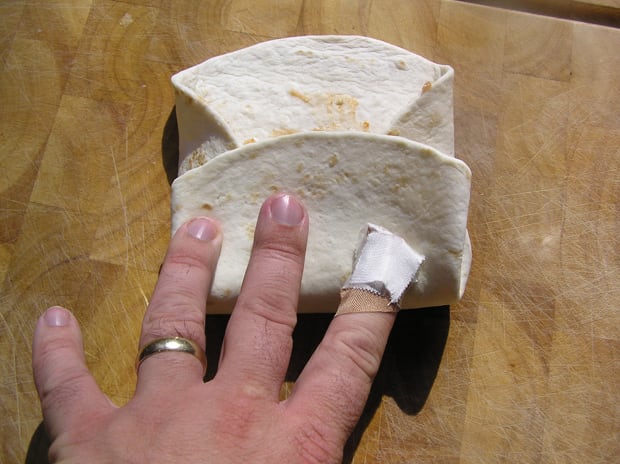 Now to assemble (Note the photos below and don’t mind the bandaged finger. Sharp knives are a blessing until they are not, but that’s another story for another time): 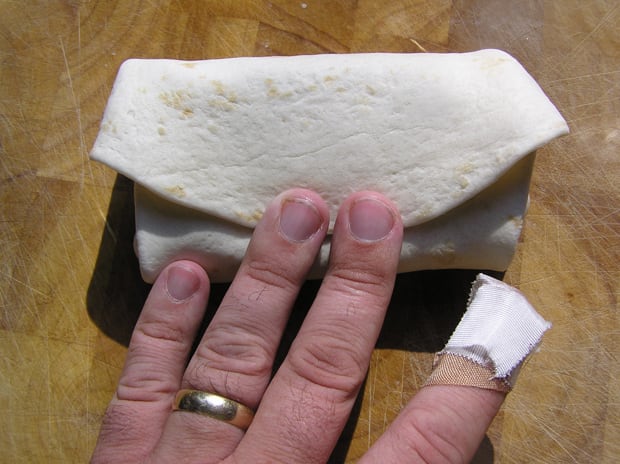 Take the bottom and top quarters of the burrito and fold them over about a quarter of the way over. Crease the folds with your fingers a tad and then rotate the burrito so one of the open ends of the burrito is facing you. Fold that flap completely over the ingredients to form a packet that holds the ingredients (this should now be eerily familiar to anyone who was raised in Vermont). Then fold the top flap over the packet. And voila, you have a burrito. Almost. Too often things fall apart from here because we don’t seal things properly. I too have been the unwitting victim of burrito failure until I discovered that I was missing a crucial, final step 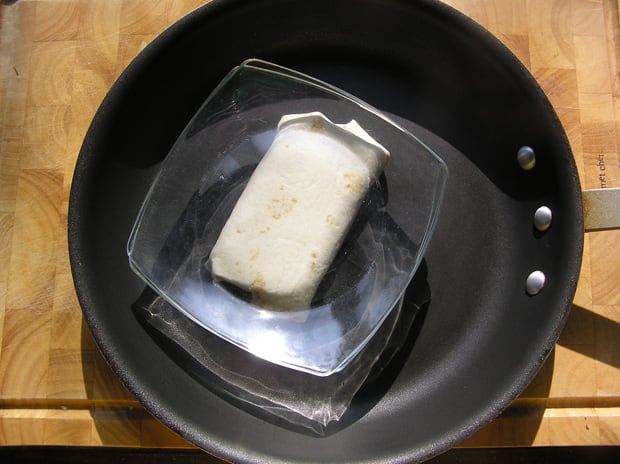 This all crystallized for me while I was waiting in line at Bubba’s Burrito Bar in Islip, NY a few weeks ago. “Bubba’s,” as it’s affectionately known to the locals, is always jam packed so it takes a little while to get your order. It also has an open kitchen, which combined with the wait time leads to perfect opportunity to watch a master of the dark art of burrito preparation (Bubba himself) ply his trade. I noticed that at the front of the kitchen was something that looked a combination of a salamander and a panini press. As each burrito was prepared, Bubba would finish it by giving it a brief “press” which lightly caramelized its top and bottom, effectively sealing it. Now, every burrito that comes out of that kitchen is as dense as a brick but they never fall apart. I thought, “Tim is onto something.” (Bubba’s real name is Tim Henriksen and if you are ever in within shouting distance of the south shore of Long Island, I highly recommend the pilgrimage to his establishment.)

So it turns out that hot-pressing things a bit is the missing final step that will prevent your burrito from falling apart at home. To do this at home without purchasing a high end press, heat a non-stick pan over medium low heat and add the slightest bit of canola oil across the pan. Place the folded side of the burrito down first and weigh it down with a small plate or two. Let it caramelize for a minute or two and flip it over and do the same for the other side. From there, serve your structurally sound burrito immediately.