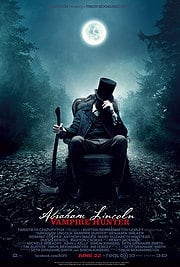 [xrr rating=2.75/5]You know what you’re going to get with Abraham Lincoln: Vampire Hunter. Honest Abe fightin’ vampires. Some shitty slo-mo action scenes. Some toothless scares. So rather than drag all that out over 500 words, allow me to fill you in on what you’d get if you replaced the first half of the title with a different president…

James Monroe: Vampire Hunter– Monroe re-writes his famous doctrine to include staking any vampire who attacks the western hemisphere.

John Quincy Adams: Vampire Hunter– When Adams collapses on the floor of the House it’s not due to the stroke that supposedly killed him, but a festering vampire bite.

Andrew Jackson: Vampire Hunter– One of the bloodiest installments in the series, Jackson is the first president to install running water in the White House. When the bloodsuckers invade, they soon realize that it’s holy water.

Martin Van Buren: Vampire Hunter– Van Buren’s ancestors turn out to be Dutch vampires. Does the president fight them or become one of them? Gives the slogan, “Van, Van is a used-up man” an entirely different meaning.

William Henry Harrison: Vampire Hunter– This installment is just a teaser for the next one as vampires murder Harrison 32 days into his presidency.

John Tyler: Vampire Hunter– Like the Abraham Lincoln installment, vampires murder Tyler’s mother when he is a young boy. Unlike Abe, who uses a silver-coated axe to kill his enemies, Tyler uses a violin bow.

James Polk: Vampire Hunter– Polk must race against the vampire hordes to secure California’s gold. His mysterious death will end the film on a cliffhanger.

Zachary Taylor: Vampire Hunter– Taylor and his trusty horse Old Whitey fight off the vampire hordes during the Mexican War. He is murdered in office after eating a bowl of cherries and milk during a July 4th ceremony. But were they really cherries?

Millard Fillmore: Vampire Hunter– After his wife Abigail Powers is murdered by vampires, Fillmore shirks his presidential duties, sliding the country closer to civil war as he stalks her killers by night.

Franklin Pierce: Vampire Hunter-Vampires kill Pierce’s son in what looks like a train wreck between his election and swearing-in. Tagline: “Vampires aren’t the only ones who Pierce.”

James Buchanan: Vampire Hunter– Guest writer Anne Rice writes the screenplay for this installment. Free beer for anyone who gets it.

Andrew Johnson: Vampire Hunter– Johnson tells his cabinet of his plans to eradicate the vampire plague that has ravaged America since the dawn of civilization. Gets impeached.

Rutherford B. Hayes: Vampire Hunter– Hayes and his teetotaler wife are surprised when vampires replace the White House’s lemonade with white wine. “They stole his juice. Now he’s out for blood.”

James Garfield: Vampire Hunter– We learn how vampires contracted Charles Guiteau to kill Garfield after his messy extramarital affair with one of their kind in New York.

Chester Arthur: Vampire Hunter– Vampires infect Arthur with what doctors call Bright’s Disease. As his kidneys begin to fail, Arthur must kill the vampire leader and reverse the curse.

Grover Cleveland: Vampire Hunter– This installment, like the final Twilight movie is told in two different films. This is part one.

Benjamin Harrison: Vampire Hunter– Known as the Human Iceberg, Harrison is the most cold-blooded of the vampire hunters. He eventually drops out of running for president a second time when vampires murder his wife Caroline.

William McKinley: Vampire Hunter– The film begins as McKinley is dying from a gunshot wound. He has eight days to decide whether to accept immortal life or die of gangrene.

Theodore Roosevelt: Vampire Hunter– Quentin Tarantino directs this installment as Teddy battles vampires at San Juan Hill, in the slums of New York and the wilds of our first National Parks.

William Howard Taft: Vampire Hunter– Taft’s guilt about his secret identity causes his weight to balloon to more than 300 pounds. The film’s centerpiece features Taft fighting off a pack of vampires with nothing more than a handful of almonds.

Woodrow Wilson: Vampire Hunter– Once again, vampires strike a presidential wife. After Ellen dies, Wilson fights off vampires until he is weakened by a stroke.

Warren G. Harding: Vampire Hunter– We find out at the end of the film that Harding has been working with the vampires all along.

Calvin Coolidge: Vampire Hunter– The only silent installment in the serious, Cal breaks his silence at the end of the film to admonish the audience: “One thing about living in Vermont I never could stomach, all the damned vampires.”

Herbert Hoover: Vampire Hunter– Vampires suck the life out of the Dow Jones, leaving Hoover scrambling to save not only his family, but the country.

Franklin D. Roosevelt: Vampire Hunter– The longest installment of the series, it tells the story of Roosevelt forming the United Nations against a global vampire threat. But when Germany and other countries hold out, will Roosevelt plunge our country into war?

John F. Kennedy: Vampire Hunter– Kennedy learns that Castro is harboring vampires in Cuba, leading to a tense 13 days. However, when the entire Kennedy clan (including Marilyn Monroe) is infected with vampirism, it is up to the government to slowly wipe them out.

Lyndon B. Johnson: Vampire Hunter– Vampires argue for equal rights. Does Johnson cave or try to suppress them?

Richard Nixon: Vampire Hunter– Nixon begins a surveillance exercise that may expose the hidden leader of the vampires. But what price is too high for the America public to pay to learn the truth?

Gerald Ford: Vampire Hunter– In this comedic installment, the clumsiest vampire hunter falls down stairs and breaks through windows while fighting some of the most fierce bloodsuckers known to man.

Ronald Reagan: Vampire Hunter– As Reagan’s memory slowly flees him, he must remember to teach his vice president how to fight off vampires before it’s too late.

George Bush: Vampire Hunter– Obviously, Reagan doesn’t teach Bush in time as this is the first installment to feature no vampire deaths.

Bill Clinton: Vampire Hunter– Slapped with an NC-17 rating, this installment is the first to feature president on vampire sex.

Barack Obama: Vampire Hunter– Subtitled “Nothing Changes.” This installment features the most suave vampire hunter of all. Too bad no one believes his vampire hunting background.