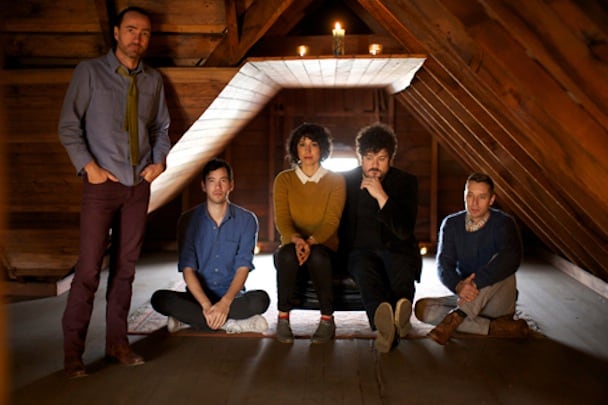 To say the Shins show at the Pageant was highly anticipated would be an understatement. The concert sold out quickly, a phenomenon usually only seen in St. Louis for Sammy Hagar or 1970s arena rock bands. The venue’s Halo Bar – which grants early entry to the Pageant several crucial minutes before the main doors open – filled up almost instantly. An inordinate amount of concertgoers excitedly snapped photos of themselves next to a green “Sold Out! The Shins!” sign crudely taped to the box office door. By a few minutes before 7 pm, over an hour before the opening act even walked out, the Pageant’s lower level was full. This is what happens when the Cardinals aren’t in town.

However, this eagerness came at the expense of the two openers. An energetic half-hour set from Deep Sea Diver that drew heavily from latest album History Speaks acted as little more than background noise to loud conversations, while shortly thereafter the Antlers took the stage to half-hearted applause. It was a feeble welcome and unfortunately an indication of what was to come. The very chatty crowd was distractingly audible during the band’s 40-minute performance, to the point that Peter Silberman’s voice was drowned out when he sang falsetto, which he did often. The band ignored Hospice and instead offered one new song along with material from Burst Apart, with “Rolled Together,” “Parentheses,” “I Don’t Want Love,” and “Putting the Dog to Sleep” more instrumentally drawn out and deliberate than how they appear on the LP. It was a beautifully ambient set that required patience and silence, which was in short supply from the largely indifferent crowd, many of which passed the time bullshitting with buddies or with their faces buried in their smartphones.

The change in collective attention span became obvious when the Shins began their set. Playing an up-tempo, crowd-pleasing mix of songs that spanned the band’s entire catalog, James Mercer and a newly configured lineup pretty much had the crowd in their pocket from the onset. As the group confidently strolled through “Phantom Limb,” “Caring Is Creepy” and “Simple Song,” a quick glance around the Pageant revealed various fits of euphoria: fist pumping, song lyrics being mouthed religiously, beers being spilled as bodies bumped and swayed awkwardly. Despite a mediocre sound mix, some of the band’s best qualities came across, particularly the songs’ catchy melodies and Mercer’s clever vocal inflections on Chutes Too Narrow tunes like “Saint Simon,” “So Says I,” “Mine’s Not a High Horse” and “Kissing the Lipless.” “New Slang” predictably received the largest crowd response of the night and probably resulted in half of the audience digging out Garden State the next morning and convincing themselves it’s not pretentious junk. Most songs had a bit of an edge to them in this live setting, which made them differ slightly from their studio counterparts. Mercer and the band were clearly in good spirits, humorously commenting that they’d spent a couple days in St. Louis raiding the record stores and grabbing up stuff from Ike and Tina Turner, Gary U.S. Bonds and, facetiously one hopes, Creed.

So the Shins were finely tuned and it showed. Still, the night had an odd vibe to it, owing both to the average sound quality and the crowd’s general rudeness toward Deep Sea Diver and the Antlers. For Shins fans it was undoubtedly worth the wait and these fans adoringly responded to the headliners in kind. It’s more than disappointing, though, when one promising young band and another that boasts a pair of stellar albums in Hospice and Burst Apart get talked over or treated as house bands for St. Louis social hour.