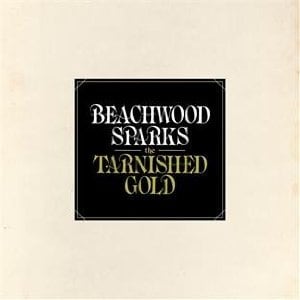 [xrr rating=3.0/5]Beachwood Sparks have been away a while. Hibernating through the late-aughts folk-country revivals that saw such similarly misty, kaleidoscopic outfits as Fleet Foxes, Bon Iver, Cave Singers and Cotton Jones bounce around on the country’s speakers, they’ve only now followed up 2001’s Once We Were Trees with their third full-length, The Tarnished Gold. Now amid a revival of its own in a sense, the band has capitalized on the reunion ongoing after playing a few dates (with a revised lineup) in 2008 by releasing their first new material since 2002 EP Make the Robot Cowboys Cry. Not to intimate the members comprising the band have been dormant – in the interim, several ‘Sparks were involved in all three of psychedelic surf-rock act the Tyde’s records as well as a number of other side projects.

But despite the periodicity, other than toning down the psych frequencies and tuning in to a more laid back, soft harmony-inflected sound, not much is noticeably changed. Painting the same preference for unhurried folk and patiently rolling ballads that underpinned both prior LPs, the record primarily features the band getting their trail legs back in measured rambles of twang and jangle, Mojave 3 hum and beach bum acoustic.

Transitioning from Gruff Rhys-style pop back to Gram Parsons, the title track (“what remains when the ashes turn cold”) features skipping rhythm, gilded harmonies and AM radio sheen with a kicker of synth. Banjo and a conversational tone give “Talk About Lonesome” a Loudon Wainwright III feel. “Don’t feel like talking to myself/ Empty bottles sitting on the shelf/ Rain beating down on the roof like a drum” – and then the darkly bleak verse with a hint of rueful sneer that recalls music scene relations Brian Jonestown Massacre – “and that’s a jail you can’t escape from.” “Water from the Well” and “Leave That Light On” are conventional pieces in the genre, but “Mollusk” manages to play on its style a bit more freely and circumscribes appreciable territory.

The record is slightly frontloaded, however, with exception of the not unappealing “Earl Jean.” Kicking up the fuzz and supplanting talk of “strange vibes” for something about waves or surfboard fins, it could double as an outro on a Tyde record. “No Queremos Oro” is a decent stab at the style, but the preceding “Nature’s Light” is mildly forgettable. “Orange Grass Special” has a little campfire stomp emerge halfway through, savior to a song previously lacking much to distinguish it from any other straightforward throwback. The too-precious molasses folk of “Alone Together” is not a stone’s throw from the Elected’s. And “Goodbye” is a little obvious, its lullaby tones and rhymes not a particularly original choice for a closer.

The Tarnished Gold is a record of Beachwood Sparks getting back up to speed after a lot of time spent elsewhere, as though the appendages making up the band had atrophied a little and required stretching. After this creaky reunion record, it’s entirely within the realm of possibility that they could produce something as modest and powerfully engaging as their first two albums. This effort, while sluggish at times, is a multi-colored slate of scuffed gems, and hopefully the band continues to regain its footing.