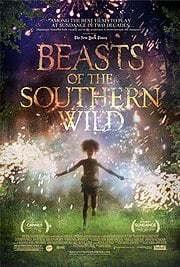 [xrr rating=3.25/5]A polished hodgepodge of animism, caricature and poetic allegory, Benh Zeitlin’s Beasts of the Southern Wild aspires to a ragged sort of transcendence, all the while clinging to hidden formulaic underpinnings. Set in a storybook world that forcefully mirrors our own, it’s both hopelessly nostalgic and impressively practical, a divide that mirrors a host of other internal conflicts, poised between inventive interpretation and shallow exploitation. This schematic fits right into the fabric of the film, which explores all kinds of rifts and divides (man and nature, predator and prey, good and evil) without fussing too much over the borders between each side. It’s this kind of perspective that elevates Beasts, saving its embrace of magic and wonder from overt syrupiness.

All this is filtered through the perspective of the feisty six-year-old Hushpuppy (Quvenzhané Wallis), living with her father in a ramshackle shantytown called the ‘Bathtub,’ a place that has flooded before and surely will again. Hushpuppy’s clearest motif is also her means of introduction: the habit of putting her ear to the hearts of living creatures, to gauge the condition of their steadily beating hearts. She uses this method to find the life in everything, and the film uses her as a conduit to do the same, exploiting the flourishing disarray of the Louisiana bayou, with its chockablock flora and fauna. So while Beasts often feels as calculated and precious as a Wes Anderson movie, it’s pushed in the direction of chaos rather than order, through a style defined by handheld cameras and roughly mixed audio, with scenes of impromptu parties that find Hushpuppy drinking liquor and sucking the meat out of fresh crabs. These scenes are cute, but there’s always a slightly dangerous edge to them.

That edge is softened by the film’s fable status; a device which at times threatens to turn into a crutch. At other times, when the movie transmutes into a fever-dream reimagining of a post-Katrina, post-Deepwater Horizon Gulf Coast, the mythic style becomes more organic, providing the circumstances for a pointed reimagining of the region’s recent calamities. The two sides thrives off each other, but the film is hurt by the fact that its bad guys remain faceless, appearing as hovering helicopters and in the particularly striking image of a giant levee, which separates the civilized world from the tumbledown disorder of the Bathtub. There’s an us-versus-them quality to Beasts, but the insistent focus on the warmth inherent to the ‘us’ side, and the use of recognizable but vacant images like that levee, make it feel disappointingly toothless.

All this feels like the neorealist methods of post-war Italy given a spicy update – with local color, nonprofessional actors and lots of wreckage, in addition to immediate political concerns filtered through archetypal story structures. But Beasts differs further in the way it sprinkles on magic like seasoning, a process which makes the film easier to digest but also muddies its flavors. It’s matched by the uncomfortable shoehorning of classic stereotypes onto current trends, with the down-home rhythms of the Gulf Coast cast as an organic locavore analogue. The Bathtub is a place where the land offers up its bounty easily, and its earth-communing denizens take it without question. Zeitlin scruffs up these stereotypes enough that they feel rougher than they might have, but most of the characters here are still paper-thin, and the film’s use of them feels simplistic and tacky.

These kind of missteps serve as reminder that, for all its lush naturalism and admirable restraint, Beasts of the Southern Wild is still a movie fronted by a child and steeped in a hazy, lazy magical realism, a technique which affords it the chance to be murky and manipulative, while coasting on the occasional striking image or idea. At its best it’s a stirring evocation of the power of nature and of human tenacity. At its worst, it’s a loud, emotionally pushy movie, full of half-formed symbols and ideas.