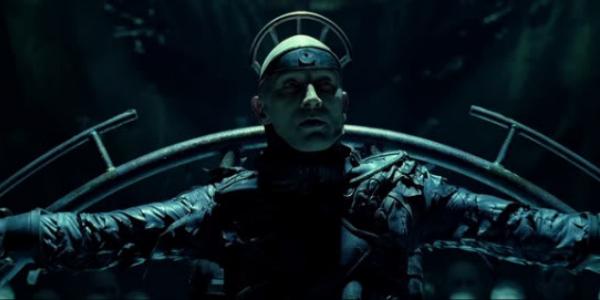 The late ‘90s were a time of innocence. As a nation, we were entranced by the sound of the once and future Fresh Prince, Will Smith, getting’ jiggy wit it on the radio, a spry Bill Clinton had settled into his second term of office as our President and a science fiction film hit theaters. It was a strange, nearly off-putting movie, even by standards of the genre, concerned with the philosophy of being and identity. It follows a young man who suddenly awakens to find an artificial world controlled by mysterious, nearly identical things that only appear to be human, a young man who must learn to master his mysterious, otherworldly powers and try to save his dark-haired love interest. If you read the title of this article, you know I’m not talking about The Matrix (1999), but you couldn’t be blamed for thinking so. One year before the unexpected smash success of the Wachowski Brothers’ film, a film was released called Dark City. Although it received generally decent reviews at the time, it couldn’t stand up to the monster blockbuster event known as Titanic and was relegated to cult status. Eight years later, the film was released in a new director’s cut, improving an already overlooked gem, and while Dark City is not without its flaws, it’s a remarkably assured, genre subversive movie.

I’m not going to overload on comparisons to The Matrix here, because Dark City is a unique movie in its own right. Despite the basic similarities of the premise, the two movies treat the worlds they create very differently: while The Matrix was futuristic, indebted to the glossiness of high rise towers and black latex, Dark City looks very much to the past. The film has the look of a noir film, not science fiction; fedoras abound, the titular city is full of vintage vehicles, nightclubs with torch singers and even features that most unique business of the 1950s, the automat. And even more than that, the initial premise is straight out of a pulp novel: somewhere in the city, a serial killer is murdering nubile blond prostitutes and a grim police detective has to track him down. But all that’s an elaborate bait and switch. The serial killer is not who anyone thinks he is, not even himself. Neither is the detective nor anyone else in the city. Neither is the city, for that matter.

A young man (Rufus Sewell) wakes in a tub full of water in a dingy room, not knowing even his own name. He receives a phone call from a strange man warning him of danger, and then discovers the bloody body of a young woman in the apartment. Dark City is consumed with the nature of identity; it’s telling that from the first few minutes of the film, neither the audience nor the protagonist have any idea who the young man is, only the circumstances. And that’s very important to the eventual twist of the film, that the situation a person finds himself in is more significant than their identity. And what’s the twist? Nothing in the city is real. It’s an artificial habitat floating in space, psychically manipulated nightly by spiderlike aliens who live in the heads of reanimated corpses and swap the identities of the unknowingly imprisoned humans back and forth in an effort to find the essence of humanity. 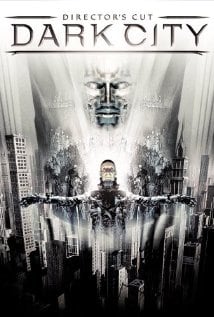 It’s a hook indebted as much to horror as it is to science fiction or noir. It even has a mad scientist (Kiefer Sutherland), a limping, short-breathed little man with a bowl cut and human personalities in syringes. Dark City is a remarkable fusion of genres, combining elements of all three to create a strange, intriguing film. Once the protagonist (soon to be named John, that most generic of names) begins to piece things together, nothing seems to make sense. At the same time, Inspector Bumstead (William Hurt) picks up the serial killer case from a predecessor kicked off the force, also finding that the clues don’t add up to any logical conclusion. Everything is the city is logical and works, but only until you start digging beneath the surface; then it all falls apart. The theme of something being only as real as people believe it to be is best exemplified by a giant billboard advertising a sunny vacation spot called Shell Beach. Everyone knows about it; when asked, everyone of course knows how to get there. But when pressed for details, no one can quite recall the directions. No one actually knows anything about themselves or the city, they only know that they know.

Dark City works best in the sequences in which nothing makes sense, with director Alex Proyas (who also co-wrote with David S. Goyer and Lem Dobbs) creating an increasingly creepy atmosphere of paranoia in the city’s decrepit streets and perpetually under-lit rooms. But it’s also gripping in its action sequences, particularly scenes in which the aliens (called Strangers) pursue the amnesiac John through alleys and basements that change form as he tries to escape; just like its inhabitants, the structure of the city is malleable and unfixed. The most epic set pieces involve the city rearranging itself in huge blocks, skyscrapers becoming subways, tenement rooms becoming mansions, streets upending themselves. It’s easy to watch the sweep of a city turning in on itself and see where Christopher Nolan was taking notes for Memento.

The 2008 director’s cut is a significant improvement from the original theatrical release, although it doesn’t have to change much. As with another science fiction film mangled by studio interference, a Blade Runner-style explanatory narration was added to the beginning of the film. Apparently someone was afraid audiences wouldn’t be able to follow the twists of the story without a primer, completely oblivious to the fact that that’s the entire point of plot twists. The director’s cut deleted the narration and restructured several scenes. In either derivation, Dark City is an unfairly overlooked film in the science fiction canon. It’s an Edward Hopper painting filtered through a “Twilight Zone” mentality, a strange convergence of genres that somehow work together to create a wholly unique film.