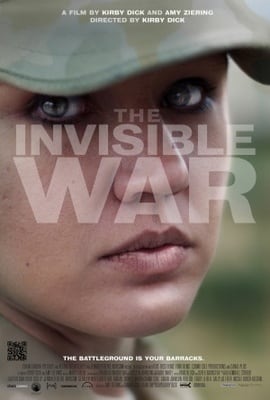 [xrr rating=4.5/5]Using data culled from the Department of Defense and the Coast Guard, the Women’s Memorial Foundation determined that there were over 200,000 active duty women in the U.S. military as of the end of September last year. In 2011 alone, there were 20,800 violent sex crimes perpetrated against enlisted personnel, and, as the punishing new documentary The Invisible War asserts, over 20% of the women who have chosen the military will face sexual assault during their time in uniform. With exacting construction, empathetic reporting and dogged determination, director Kirby Dick has crafted a compelling piece of film journalism, fully honoring the vast tragedy of crimes perpetrated within an organization that is supposed to be defined by discipline and trust. Even more damning, Dick demonstrates the many ways that the structure of military justice winds up revictimizing those who have already been violated in the most cruelly intimate manner.

In his most recent documentaries prior to Invisible War, Dick has opted to take on the guise of provocateur, using his films to seemingly fish for headlines with gimmicks like exposing the identities of the members of the MPAA rating board (This Film is Not Yet Rated in 2006) or indulging in idle speculation about the private hypocrisy of anti-gay politicians (Outrage in 2009). Dick was frankly taking on injustice, albeit at various levels of true social import, but he was also indulging a little too much in indulgent muckraking, anointing specific villains in a way that threatened to downplay the complexities of his topics. His intelligence and passion were clear. It’s his focus that occasionally got a little hazy.

Perhaps due to the terrible gravity of his new subject, Dick has achieved a fine new balance as a filmmaker. The Invisible War avoids the sensational and the recklessly inflammatory, opting instead for a sober, measured approach that lets the assembled facts and testimony carry the weight. In particular, Dick and his collaborators bring together a group of brave survivors to share their stories, doing so with piercing emotion. Expending frames on people looking directly into the camera and relating their experiences is hardly a revolutionary approach for a documentary, but it’s absolutely vital for a film like this one, taking an ongoing problem out of the abstract and making it painfully personal. Whatever impact bleak statistics on a screen might have, they can’t compare to the struggle of Kori Cioca, a Coast Guard veteran dealing with post-traumatic stress disorder and severe physical injuries sustained when she was assaulted, as her appeals for medical assistance to the V.A. either exist in unhelpful stasis or are callously rebuffed, often due to technicalities. Her story and those of her fellow survivors, all of them struggling on a daily basis to find some way to persevere, are ceaselessly powerful. Dick clearly knows that, and he consistently finds the best way to let their voices carry the film.

Dick also conveys the breadth of the problem, assembling tenacious advocates who explicate the many ways that survivors of sexual assault in the military are failed by the exact people who are supposed to be looking out for them. There’s also a reminder that this is not strictly a gender-based problem when Dick directs his camera at a man who talks frankly about his own experience many years ago when he was raped by male colleagues in an incident that had absolutely nothing to do with the sort of panicked falsehoods that bigots present as the inevitable outcome of gays serving openly in the military, but was instead a clear, heartless expression of power through sexual subjugation and humiliation. The film arguably could have used a little more of this perspective, but an already under-reported crime is undoubtedly even less likely to be addressed when it’s perpetrated on men by other men. Finding survivors to share the grim details of their experiences had to be especially daunting.

The Invisible War is exhausting in the way of many great documentaries, relentlessly digging at an unpleasant truth. Sexual assault is an abominable part of human existence, but Dick manages to show how it can be an especially awful outcome for those who experience it while in the midst of military service, given that the very foundations of the institution are built on camaraderie and trust. It’s then not only an attack against a person’s physical sanctity, but a harsh betrayal of the culture of shared sacrifice that they’ve dedicated themselves to by putting on a uniform.