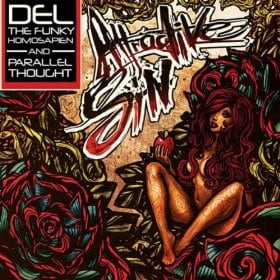 [xrr rating=3.75/5]Parallel Thought put the “funk” in “Del the Funky Homosapien”. From 2009’s Parallel Uni-verses on, the New Jersey production duo have been lacing Damon Albarn’s favorite rapper with groovy, laid-back but sharply sub-textured beats that are as weird and dope as Del. The Oakland MC is at his best when he has something smooth to work with, and on Attractive Sin, Del’s flow hasn’t slipped an inch – he’s still a hazy wave of ideas that shore up nicely to that freshly vintage sound. Despite its terrible album cover, Attractive Sin is an enticing record, full of jazz and soul-infused samples that bubble like a bong that’s ready to rip.

The past few years have found the resurgence of the single-producer album, with up-and-comers like Action Bronson and Curren$y riding it out to the end with the same team, usually fostering a solid and well-gelled product, such as Bronson and Statik Selektah’s Well-Done, Curren$y’s Pilot Talk and Covert Coup joints, and the same can largely be said of this album. Opener “On Momma’s House” kicks things off with an elegant synth refrain and piano tinkle that would be the perfect campaign song if Del was running for Rap President. The shit he’s spitting could be a campaign speech, with his authoritative baritone bobbing into every crevice that Parallel Thought didn’t stuff with flex. “Different Guidelines” has a bendy saxophone riff base that sounds like somebody took a finger from “What Does Your Soul Look Like (Pt.1)” and mailed that shit to Music. Del’s deep voice has a challenger as Parallel Thought infused this beat with a bassline that will convince you your shocks are bad if you bump it in your car.

Several times on the album Del references his Diesel/ DZL alias, and it couldn’t be more apt – his potency as an MC is unquestionable. Never the most punchline dexterous, Del works better when you follow his semi-stream of consciousness, and on tracks like “Charlie Brown” he shows his playful pop-culture side: “My voice sound like Charlie Brown teacher/ Can’t reach your brain through the reefer,” a hilarious thing for a rapper to say but surprisingly reflective of his status as well. Honest moments like this are neatly placed throughout Attractive Sin, like “1520 Sedgewick, which Parallel Thought must’ve stolen from a alternate universe where 3rd Bass is still the biggest group in the world. It segues beautifully into the smoky piano tingling and flute stings of “Get to Drillin,” where Del deals out his own special brand of advice: “Gotta stay in tune/ While you facilitate your own doom.”

Ultimately the album falls to the trap of the seasoned rapper. The last two tracks, “Show’s Over” and “Front Like You Know,” are the sound of tacked-on relevance. Throughout the record Del and Parallel Thought kept it solid because they weren’t concerned with their image, only with doing what they wanted to, but on these Del basically turns into a preacher, just chastising the audience while referencing the game, swan songs and final curtains. (Rap Game Bingo)! Despite the large misstep, the previous 35 minutes are tightly rolled and even at the end he still pulls out a gleam of the not-so-Sour Diesel/ DZL, and this line from “Show’s Over” nails the mission statement to the wall: “Not that microwave rap/ Don’t confuse it cuz the groove is laid back.” Del and Parallel Thought have still got it, but Attractive Sin is a more tempting spin when they don’t remind you as much.

[xrr rating=3.25/5]You’ve got to be doing something right when your voice is describ…