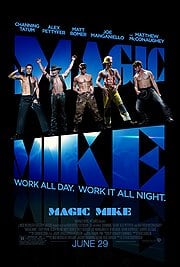 Magic Mike is the most eminently Soderberghian of male strippers movies, which makes you think he could subject any story to his signature style. This particular mode of filmmaking doesn’t always call attention to itself, and to the casual observer, it might not be obvious that The Girlfriend Experience, The Informant!, Contagion, Haywire and now Magic Mike, to name the films that comprise his recent prodigious output, were all made by the same craftsman. But what unites these films is in acute interest in the systems surrounding their characters, systems that transcend any single individual. The commodification of women or the spread of a disease are perhaps not so similar but both are quite literally invisible at the large scale. Soderbergh efforts to map them out, then, and partly realizes the dream of cinema to make visible the previously unseeable. He does this through an analytical style that draws the viewer’s attention away from the transfixing center of the image, ironic given Soderbergh’s tendency to frame characters front and center when speaking dialogue, and towards its meticulously composed edges. Soderbergh’s particular fondness for letting sounds from the subsequent scene overlap the current one before it has finished suggests the image of a tightly interlocking series of discrete units, like a stubborn equation rearranged until solved. That he can do this even with a film as wonderfully sensationalistic and extroverted as Magic Mike suggests a rare consistency and even mastery within today’s faceless studio system.

You will notice Soderbergh’s signature way of creating and arranging images from the very beginning of Magic Mike. In a series of early scenes in which Mike (Channing Tatum) meets, works alongside as a roofer and then befriends Adam (Alex Pettyfer), Soderbergh refuses to indicate to the viewer where this story is heading. This wonderful sense of drift, in which lines of dialogue casually rise and then fall back into the warmly atmospheric scenes, creates an almost documentary-like feel. This immediately recalls 2009’s The Girlfriend Experience, where Soderbergh used his skill for composition to frame naturalistic dialogue approaching everyday verisimilitude, focusing particularly on the self-involved patter of the elite as they digest the financial crisis and plot their next moves. Both films tend to view the sex industry through the lens of capitalism, but in tone, Magic Mike is significantly warmer. When Mike takes Adam to the strip club at which he performs, owned and operated by Matthew McConaughey’s Dallas (a role as suited for the actor as any other he’s had), the focus turns to the way this group operates like a community, eschewing The Girlfriend Experience’s growing awareness of social anomie.

In fact, for much of the film, Magic Mike seems strangely bereft of conflict. One scene in particular, in which Mike and his coworkers from the strip club throw a beach party, gives the sense that these characters live in an almost Edenic world. Soderbergh’s focus on passionate camaraderie amongst a group of rebellious outcasts recalls the work of Nicholas Ray, whose The Lusty Men has more than a little in common with Magic Mike (which could also plausibly have been given that same title). Mike is the center of this world, not only because he is easily the film’s most charismatic presence—his strip show set to Ginuwine’s “Pony” should be a pure, cinematic delight for all viewers, regardless of sexuality—but because he is called out as the character with integrity and uncharacteristic depth. Unlike everyone around him, Mike has genuine dreams and ambitions: he wants to make furniture for a living. When he displays his genuine knowledge of this profession, he reveals himself as someone different, in it for more than the money and the fun.

As the film details the goings-on of Mike’s world, things begin to sour ever so suddenly. In illustrating this, Soderbergh’s style serves him well. He never allows us to become so transfixed by what we see that we forget that images can lie, just as a stripper’s performance turns on the illusory suggestion of intimacy (sometimes so convincing we cannot believe there’s not some truth to it). If critics charge Soderbergh with a certain dispassionately analytical tendency, it is surely because of this aspect of his style. But Soderbergh never seeks to castigate us for being submerged in his films, and in fact, Magic Mike’s numerous dance performances create a joyous sensory overload that occasionally make the film feel like an honest-to-goodness musical. Soderbergh’s skill is in balancing between these two competing aims, and when Mike’s world begins to crumble, Soderbergh doesn’t just allow us to feel his tragedy, he actively guides us to examine why it occurred in the first place.

In this way, his concerns in Magic Mike mirror those of the great filmmaker Rainer Werner Fassbinder, who has made countless films about individuals trapped within systems that dominate and crush them. Soderbergh’s recent films are always about more than a single individual, even one so charismatic as Tatum’s Mike. Other, more conventional films might attribute the downfall of Mike in terms of being surrounded by unreliable, bad people, as if nothing defines us beyond mere temperament. Instead, Soderbergh’s camera traces the contours of the infiltration of crass capitalism into human relationships. It’s difficult to feel betrayed by someone close to you, but it’s something rather different to understand the particular system that tends towards such social transgressions. Like Fassbinder, Soderbergh dreams of a world of unfettered and honest social relations, and through flamboyant imagery such as the 4th of July-themed striptease, he makes it clear that American capitalism is perhaps not fertile ground for such relationships. It becomes clear that the film focuses on male strippers, then, to literalize the way we are all objects within a larger, more complex system that, like the spread of disease in Contagion, is most horrifying because it is so impersonal.