Movies linger in the mind for strange reasons. Sometimes it’s because they’re amazing combinations of artistry and craftsmanship, works that still move audiences after time has past. Sometimes it’s because they’re amazingly bad, films that so defy belief in their ridiculous existence that they breed love and contempt. Then, on occasion, it’s because a movie is so very much of its time and place that uncreative towns across America should just save themselves the trouble of time capsules and bury them beneath the earth for future generations to marvel at. Such is the case with Footloose (1984).

Ah, Footloose. Is there any more breathtakingly inane word in the English language? Perhaps, but none of those words starred a 26 year old Kevin Bacon as a high school student named Ren McCormack. And while the point of this article is not to catalog the sins of Footloose, let’s take a brief moment to do so: Kenny Loggins theme song. A lead actor who required four different body doubles for his role. Chris Penn doing redneck schtick. A contempt for country life that borders on the offensive. A plot that could be summarized as “boy dances away religious oligarchy.” Yes, Footloose is a very bad film, but it’s also a fun one. Back before he became more known for playing the creepiest roles available, Bacon’s boyish heartthrob looks and easy charisma made him a natural in lightweight fare, and Footloose is nothing if not that. It’s partly due to the simplicity of the story (which to be fair, is based in real life events), which is essentially devoid of subtext. There’s nothing beneath the surface, which is about as shallow as it can get; in fact, even using the word “shallow” implies the existence of depth that simply isn’t there. When people say things in this movie, there’s no hidden shadings or implications; even the climactic speech in which Ren uses Biblical verses to support the legality of prom (yep, that’s the plot) isn’t really trying to invoke other freedoms or rights. It’s just that dancing is awesome and the Bible says so, so can we have a dance please? 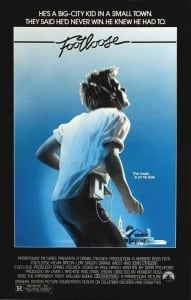 And Footloose isn’t a bad movie because of that shallowness. If anything, there’s a suitably old-fashioned purity to the film, which dodges messages and characterization in the hallowed vein of “hey kids, let’s put on a show!” It’s a movie about what it says it is, kids getting footloose (and presumably free of fancy), not a movie that sustains critical theory or observation. It’s a bad movie because of its terrible acting and awful structure, not to mention its depiction of middle America as a place where passive churchgoers are only one rebellious Chicago teen from burning books and throwing bricks through windows. More than that, it’s possibly the most 1980s movie outside of Breakin’ 2: Electric Bugaloo. It’s the cinematic equivalent of a dusty Eric Carmen cassette tape. There’s skinny ties and big hair. There’s the implication that Men at Work are a cool, hip band to listen to. There’s Sarah Jessica Parker. Basically, it’s a hermetic container of pure ‘80s. So why remake it?

I’ll be honest, I have no idea why someone had the idea to remake Footloose. It’s frankly a bizarre notion, to update a film that’s so much of its time period and that remains widely available. The 2011 version was initially envisioned as a vehicle for High School Musical Zac Efron, which makes a certain amount of sense, but then Craig Brewer was signed on as co-writer/director (with original writer Dean Pitchford) after original pick Kenny Ortega dropped out. That makes much less sense. Herbert Ross, the director of the 1984 version, was a Hollywood lifer, who helmed disparate films like The Goodbye Girl (1977), Steel Magnolias (1989) and Boys on the Side (1995). He was essentially talented gun for hire, while Brewer’s two features before Footloose, Hustle & Flow and Black Snake Moan, have a definite stamp: they’re gritty, highly sexualized and set in the South. So, basically, the opposite of Footloose.

But the thing: the 2011 version of Footloose manages a trick balancing act of being essentially the exact same movie as the original, while producing actual underlying themes. It’s a superior movie to the original, while still using 90% of the same scenes and dialogue. And if that’s an exaggeration, it’s not by much; Brewer’s version of the movie liberally reuses the majority of dialogue from the original, so scene after scene has the new incarnations of Ren (Kenny Wormald), Ariel (Julianne Hough) and Willard (Miles Teller) mouthing lines word for word. While there’s some structural rearrangement (including a brief prologue that shows the events that led up to the dancing ban), most of the movie follows the original beat for beat, nearly shot for shot. But within that framework, Brewer tweaks the film enough to actually make one-dimensional characters and a silly plot actually have some depth. 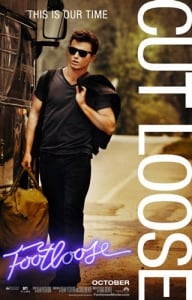 The most overt change is the most natural one: to sexualize it. While it seems obvious that dancing would have a sexual, sensual element (which is frequently cited in the original as a reason for the ban), the 1984 version is as innocent as puppies. While 1984 Ariel (Lori Singer) loudly proclaims to her preacher father (John Lithgow) that she’s no longer a virgin and even has a post-coital scene, there’s no real element of sexuality, just constant references to it. On the other hand, the 2011 film follows Ariel like a horny teenager; the camera hugs Hough’s curves and even goes as far as to show a background character taking a quick pic of her ass with his phone. The film goes so far as to present a dance sequence between Ren and Ariel as a sex scene, with copious grinding and even brief hints of orgasmic moans. Combined with a recreation of the famous “angry dance” sequence that manages to heighten the teenage anger behind the gymnastics (while still keeping the ridiculous nature of the scene), Brewer manages to create a layer of sexual frustration and pubescent angst in essentially the same movie.

Unfortunately, Brewer does also neuter the one truly compelling element of the original: the Reverend Shaw Moore. As in most of his roles, Lithgow seems to be operating on another plane from his costars; he’s the only character in the film that actually struggles with his beliefs and appears to have believable emotional reactions. In the same role, Dennis Quaid is a straw man, coasting through dialogue that Lithgow gave passion and believability. He seems less like a Southern preacher passionately addressing his congregation than a burnt out football coach just trying to get through another season. In a remake that manages to actually add human element to a ludicrous story, it’s a pity to see the single most dynamic character be so substantially reduced.

The 2011 Footloose is a bizarre movie. It’s a remake that improves on the original, yet one that barely changes a thing. It’s a feature length homage to a movie that doesn’t need or deserve it (after all, it’s not like the original was out of print). It has more depth than would be required for audiences who primarily just wanted to see some kids argue old people into letting them dance, yet still keeps itself to the twin notes of sex and anger that were so absent in the original. They’re the same movie in pretty much every way that matters, but can’t help but seem as different as sweaty sex and holding hands.