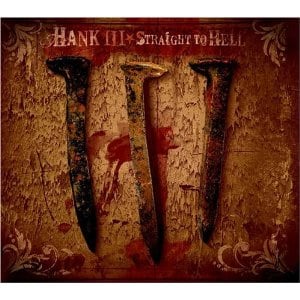 “I’m looking for trouble/And I wanna get loud.”

The worlds of country music and punk rock are more closely intertwined than most people likely realize; the history of country music is filled with rebels and shitkickers, outcasts who were living “No Future!” several decades before Johnny Rotten had defaced his first Pink Floyd shirt and like its younger, spikier haired cousin, it has similarly fallen into a sorry state of overcommercialization and homogenization. But where punk has always had a thriving, forward thinking if somewhat obscured underground to contrast the world conquering ascent of its pop and mall variants, country music has historically been left without a well-populated force of anti-Nashville stalwarts. Instead it has been forced to lean on micro-genres, like the Outlaw movement that sprang up in the late ’70s (conveniently around the same time as punk’s first wave) or more recently the alt-country scene, itself recently the victim of a sort of homogenization as it has become more and more tied to “dad rock.” Such was the landscape when the heir to one of country music’s most important dynasties started his career– suffocating in its blandness, infuriating in its lack of rebel heroes.

Hank Williams III’s life itself could be seen to symbolize this conflict; the grandson to the original Hank Williams and the son to Hank Williams Jr., Hank III couldn’t help but be stuck in the middle between country’s dangerous past and the bloated commercial era that past devolved into. Hank III’s first two albums show an artist struggling to find his voice in the midst of that conflict, attempting to merge those two worlds without committing firmly to either and suffering as a result. In the years since, Hank III has been blunt about the frustrations that went into those early efforts and the added pressure placed on him by his label, Curb, which eventually resulted in contract difficulties that kept the young future savior of country’s “redneck past” silent for nearly four years. But when the performer reemerged, it was impossible to be unsure which aspect of his family history he was siding with, once and for all.

Independently recorded and produced, Hank III’s Straight to Hell is the artist’s defining statement, an incendiary declaration of war against the mainstream country establishment that refuses to whitewash or soften Hank III’s personality or beliefs. Beginning with a sonic quote of the Louvin Brothers’ “Satan Is Real,” Hank III utilizes that classic from the legendarily tormented duo to make it clear that he knows he’s heading “Straight to Hell” and that’s exactly how he wants it. The title track emerges from the Louvin Brothers’ crooning with a demonic cackle, the instrumentation pairing the tempo and structure of bluegrass (the original punk rock, in many ways) with the attitude and swagger of heavy metal, anonymous henchmen shouting out the destination in the background. It’s both classic and ahead of its time, fully aware of and in love with the rich history of the genre and just as eager to break free from the rigidity of that with the introduction of exotic (for country) musical elements. Hank III wisely follows it up with an even more classical number, “Thrown Out of the Bar,” which finds the singer channeling his grandfather to an eerie degree as he namechecks heroes like George Jones, with whom he shoots the shit about “…how country music’s gone and lost its soul.”

Hank III drops names as frequently as an emcee pushing a mixtape all throughout Straight to Hell but it’s never for self-promotion. Instead, it’s another weapon at his disposal, a way of further exposing the way the current generation of country stars have betrayed not just what came before them but the very essence of the genre. This is especially notable on two of the album’s most well-known songs, “Country Heroes” and “Dick in Dixie.” The former is a down tempo celebration of the comfort that can be found in “Getting wasted/ Like all my country heroes,” Hank III’s declaration that “I want to hear them old songs/ Nothing of the new” less a thrown gauntlet than a statement on the lack of real camaraderie in modern country. But “Dick in Dixie” is far more deliberate in its intentions, buoyed as it is by Hank III’s confession that “Well, some say I’m not county/ And that’s just fine with me,” which is augmented by his assertion that “If you know what I’m thinking/ You’ll know that modern country really sucks.” Where “Straight to Hell” is a fatalist examination of what Hank III believes his fate to be, “Dick in Dixie” is a laundry list of what he hopes to accomplish in his time here on earth, with the overwhelming desire to “Put the dick in Dixie/ And the cunt back in country/ ‘Cause the kind of country I’m hearing nowadays/ Is a bunch of fucking shit to me.”

“Dick in Dixie” is universal in its disdain, but elsewhere Hank III is more specific in his targets, as “Not Everybody Likes Us” shows with its takedowns of Hank’s own dad and the mainstream “son of Hank” he’s become associated with, Kid Rock. The ire Hank III points towards those targets, with his statement that he’d “Rather eat the barrel/ Of a double-barrel loaded shotgun/ Than to hear that shit they call pop country music/ On 98.1” is extreme, but given his own fatalism, it’s clear that his commitment to the cause is absolute and that he’s no longer interested in seeing things in grayscale. Unsurprisingly, many of the album’s best tracks focus on the suicidal impulses the artist feels as a result of living in the large shadow of his grandfather. “Pills I Took” in particular comes across as exceedingly morbid, with the car crash sound effects that bookend it, seemingly a reference to the car crash that took out his own grandfather.

Yet Straight to Hell is ultimately an optimistic work, an excitable declaration against apathy that encourages sticking to your guns despite the odds raised against you. At heart, Hank III is an extremely accomplished songwriter and vocalist who just wants his genre of choice to be true to itself and to ignore the demands of an increasingly fickle audience in favor of generating art that is above all else passionate and faithful to its origins. Straight to Hell may sound like a demonic split between two radically different worlds, but what keeps it together and focused is Hank III’s overwhelming love for country music, peppered as it is by disdain for how that music has been mutated over the years. Listening to the album, it’s easy to agree with Hank III that modern country is “a bunch of fucking shit,” but at least it’s just as easy to see that someone is out there kicking ass and fighting that status quo, desperately attempting to overrule the Nashville majority in favor of a return to the roots that made this music so interesting in the first place.